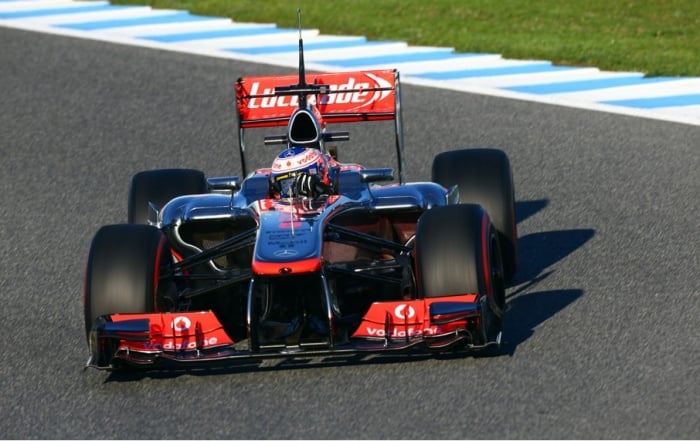 Jenson Button bounced back from an early setback to ensure that McLaren ended the first day of pre-season testing in Spain on top.

The day began badly for the 2009 world champion as his new MP4-28 ground to a halt after just three laps of the Jerez track, bringing out the red flag. The car was returned to the pits on the back of a truck with the team later confirming that a fuel-pump problem had caused the stoppage.

With the problem fixed, Button was able to have a much more positive afternoon and ended the day having completed 37 laps, with his timesheet-topping lap set on Pirelli’s new orange-striped hard-compound tyres.

“When I drove out of the garage I immediately felt comfortable in the car and very much at home,” said Button. “But I have to repeat myself: it is the first day of testing and you are not going to know if it is a championship-winning car or not. But once we solved our issues this morning the car ran smoothly. Isn’t that good news!”

“It was actually like a Friday practice session in some regards,” said Webber. “We started understanding the tyres and there were a lot of positives. There’s a bit of housekeeping we have to get on top of but, other than that, it’s been encouraging.

“The car feels similar to last year’s, so the main difference is the tyres. With these tyres you’re always on your toes. It was good that we had consistent temperatures today, so we got a lot of information and feedback to analyse, which is all good. Generally though, the car feels pretty good, so I’m happy.”

Marginally slower than Webber was Romain Grosjean in Lotus’s E21. The Frenchman set the pace in the morning and was unable to better his time in the afternoon.

Paul di Resta, fourth fastest for Force India, also set his fastest time of the day in the morning. The new VJM06 showed impressive reliability as the Scot completed 89 laps – the most of the day.

“I felt very comfortable all day and we managed to get through the programme as we focussed on collecting aero data and understanding how well the car correlates with our simulation tools at the factory,” explained Di Resta.

“We also started trying to learn as much about the tyres as possible so that we can carry that into tomorrow and optimise the set-up. The new compounds are quite different with the new construction and I’ve already felt a difference with the balance of the car in the low and high speed parts of the lap.”

Behind Di Resta was Toro Rosso’s Daniel Ricciardo in the STR8 who was marginally quicker than Felipe Massa in the Ferrari F138. The Scuderia spent nearly the entire day acquiring data relating to the behaviour of their new car.

As new team mate Lewis Hamilton looked on, Rosberg stopped out on track with smoke coming from the rear of the car. Mercedes later confirmed that an electrical fault had caused the stoppage and modifications to a wiring loom meant that Rosberg was forced to sit out the rest of the day.

“At this time of year all you want to do is spend time in the car and get a feeling for how it’s working, but these hiccups are just part of the game,” said a philosophical Rosberg. “During the laps I completed this morning, I had a good feeling with the car and it felt solid.”

Pastor Maldonado had a productive day in a revised version of Williams’ 2012 car, the FW34, completing 84 laps and posting a time marginally faster than those of F1 rookies Giedo van der Garde (in the newly-unveiled Caterham CT03) and Max Chilton (in Marussia’s MR02).

At lunchtime Chilton had said that his first pre-season test with Marussia “couldn’t have got off to a better start”, but the joy was to be short lived as a suspension problem pitched the 21-year-old Briton into the gravel at the Dry Sac hairpin in the afternoon.

Testing continues at Jerez on Wednesday.