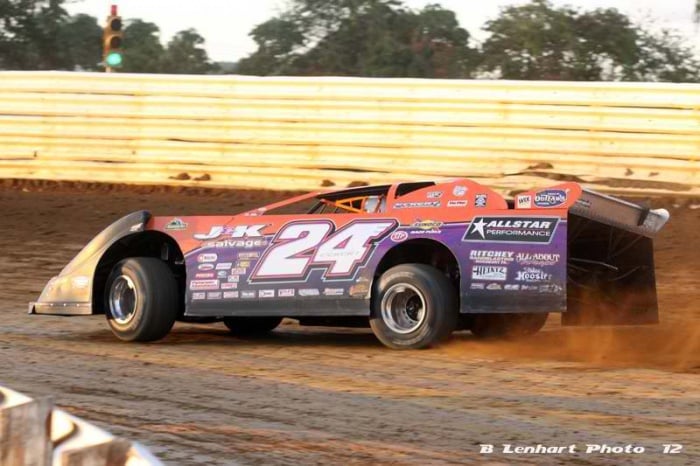 Last year, of course, Eckert captured the big-money finale of the inaugural World of Outlaws Late Model Series tripleheader at the three-eighths-mile track. This year he’ll try to duplicate his feat in an even bigger-money Winter Nationals headliner – a race that stands as the richest dirt Late Model event of 2013 Florida Speedweeks.

Eckert, 47, of York, Pa., would love to sweep the weekend, making him the first driver in WoO LMS history to win three consecutive A-Mains in as many days at the same track. But even if he falls short of that lofty achievement, a triumph in the marquee race of the Winter Nationals – and all of Florida Speedweeks – would certainly satisfy him.

“It meant a lot to us to win the big show last year (at BRP),” said Eckert, who earned $12,000 for topping last year’s 60-lap Winter Nationals finale at BRP. “It would mean even more this year. Getting that 20-grand would really help our team get through a long trip and keep going down the road.

“It’s cool to see somebody boost up the burst and have a real big race in Florida,” he added, hailing Clem’s move to enhance the second annual Winter Nationals at BRP with a true attention-grabbing special that represents the first Florida Speedweeks event since 2002 to pay $20,000 or more. “We’re all glad Bubba is doing it – and he’s a guy who can do it. He can pull down some sponsorship and get everybody talking to make it happen.”

Eckert has fond memories of the 2012 Winter Nationals finale, which served to bust him out of his struggles at the awkwardly-shaped BRP. He had never scored a top-five finish in his five previous A-Main starts there, including a pair of lackluster efforts (10th, 11th) in the first two features of last year’s Winter Nationals.

“The racing was really aggressive the first couple nights last year and we struggled,” said Eckert. “Finally, for the third night, (the track) slowed down enough and changed the racing a little bit. I don’t know if we got any better or if the racetrack just came to us, but something clicked. We kept working and changed a lot of things, and then, when the track got more slippery and you had to drive a lot straighter than you had to the first several nights, we ended up being real good.”

Eckert emerged triumphant in an exciting, down-to-the-wire 60-lapper, a race that was widely hailed as arguably the best dirt Late Model feature of 2012 Florida Speedweeks. He worked hard for his money, falling back from his sixth starting spot before rallying during the second half. When Darrell Lanigan of Union, Ky., slid high in turn two moments after passing Mike Marlar of Winfield, Tenn., for the lead on lap 43, Eckert vaulted past both drivers to assume command and later survived a last-lap challenge from Marlar, whose bid ended against the turn-three wall.

“The track got slippery, but you still had to be up on the wheel,” remembered Eckert. “It turned out to be great racing. I lost some spots early but was able to get back up through there. There were a couple incidents where guys got together and I slipped by and then I held on. It was pretty wild.”

Unpredictable racing has become a hallmark of the Bubba Army Late Model Winter Nationals at BRP. Eckert attributes much of the action to the fact that BRP is “shaped like an egg.”

“It’s a fun racetrack,” said Eckert. “It has a half-mile (type) corner and quarter-mile (type) corner, and the straightaways just meet ’em up. It makes it interesting. It’s hard to get your car really good at both ends, so you basically gotta pick your end to try to be at your best.

“It is challenging,” he continued. “I enjoy racing there, because any racetrack that makes people make mistakes is easier to race on, easier to pass. If it’s just a big, smooth circle, it can be really hard to pass. But Ocala is hard enough to get around – you gotta change directions in (turns) three and four compared to one and two, and that makes people make mistakes and opens up opportunities to pass.”

Eckert is hoping his Team Zero by Bloomquist car, which sports a more black-dominated color scheme this year, will allow him to make winning moves at BRP. He wasn’t happy with his performance during last weekend’s season-opening ‘Winter Freeze’ doubleheader at Screven Motor Speedway in Sylvania, Ga., where he finished 18th in Friday’s 40-lap A-Main (after using a provisional) and seventh in Saturday’s 50-lapper.

“I’m gonna have to improve a lot from where I’m at right now to be at my best again for that last race (at BRP), let me tell ‘ya,” Eckert said prior to Saturday night’s program at Screven. “We had some motor trouble in practice (last Wednesday night at Screven) and got our backup car out (for Friday’s program), but we were missing something. We changed everything but the seat and steering wheel coupler (on Saturday afternoon) to try to get things right.”

Eckert did improve on Saturday night at Screven, but “we still need to get better,” he said.

There will be plenty of hungry drivers for Eckert to deal with at BRP, including red-hot WoO LMS regulars Shane Clanton of Fayetteville, Ga., and Josh Richards of Shinnston, W.Va., who enter the Winter Nationals tied for the points lead after both scored a win and a runner-up finish at Screven.

The roster of WoO LMS regulars ready for duty at BPR also includes Lanigan, the defending tour champion and a winner of one A-Main in each of the last three years at BRP; 2006 titlist Tim McCreadie of Watertown, N.Y.; Tim Fuller of Watertown, N.Y.; Clint Smith of Senoia, Ga.; Chub Frank of Bear Lake, Pa.; Pat Doar of New Richmond, Wis.; and 2013 Rookie of the Year contenders Morgan Bagley of Longview, Texas, Eric Wells of Hazard, Ky., and Dillon Wood of New Smyrna Beach, Fla.

Indications are that even more talent will join the field for the ‘Super Sunday Showdown,’ including Don O’Neal of Martinsville, Ind., Steve Francis of Ashland, Ky., Dennis Erb Jr. of Carpentersville, Ill., Jared Landers of Batesville, Ark., Austin Hubbard of Seaford, Del., and John Blankenship of Williamson, W.Va.

After an open practice night on Thursday, pit gates are scheduled to open at 5 p.m. on Friday, 4 p.m. on Saturday and 12 noon on Sunday with spectator gates unlocked one hour later each day. Racing is slated to begin at 8 p.m. on Friday and 7 p.m. on Saturday, while the ‘Super Sunday Showdown’ schedule will start earlier with hot laps at 3 p.m. and racing at 4 p.m.

More information on the Bubba Army Late Model Winter Nationals can be obtained by logging on to www.bubbaracewaypark.com or calling 352-622-9400.

NASCAR details the back to back off-weekends for 2020

Denny Hamlin was hoping Logano and Truex would ‘crash harder’