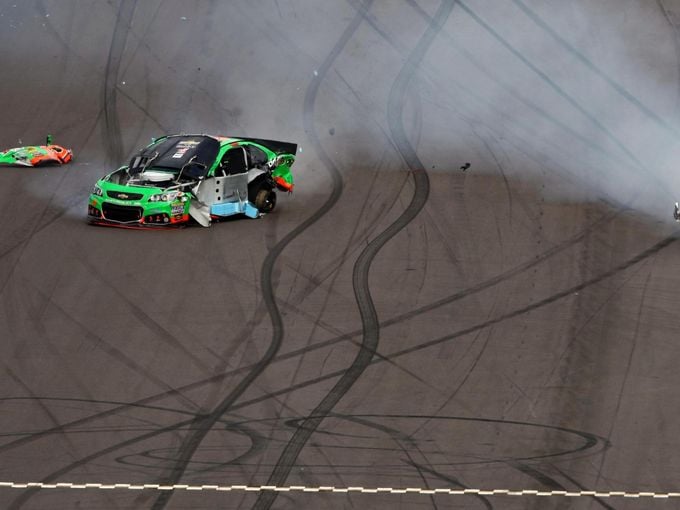 LAS VEGAS — Danica Patrick injured at the dirt track in Las Vegas, suffering from only a headache and sore neck following a hard crash in last week’s Phoenix race wasn’t bad enough for Danica Patrick, her night as a dirt track race fan could have been better.

Patrick, attending a race at the Las Vegas Motor Speedway dirt track, took a rock to the head on Thursday night, she said Friday.

“I feel like I have a concussion from last night,” she said, joking. “It’s really sore. It hit me straight in the head. Good thing I had a hat on, or I feel like there would have been blood.”

Joe Crowley, who is part of Patrick’s public relations team, said Patrick had a prescheduled meeting with NASCAR medical Friday to follow up on some paperwork from her Phoenix crash.

Since NASCAR had heard of the rock incident, they gave her a minor checkup and asked if she was OK.

As for Phoenix, where Patrick blew a tire, sending her car hard into the wall, the Sprint Cup Series rookie said she experienced a sore neck for the first time after a crash.

Patrick said she did not believe she had a concussion — “I really felt fine,” she said — and was cleared by the medical staff.

“I told them, I said, ‘I had a headache on Sunday night and on Monday my neck was sore,’ ” and they said, ‘Well, it sounds like it could have been worse and we’re glad you’re OK,’ ” she said.