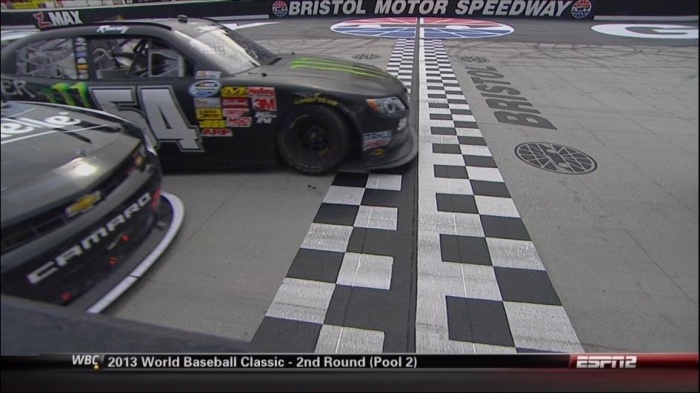 “I did everything I could to try to protect the momentum,” Busch said. “A young kid like that, he’s got a lot of talent. He’s obviously made a name for himself.”

Busch, who will sit on the pole for Sunday’s Food City 500, led 156 of the 300 laps. He also turned the fastest laps in both Sprint Cup practice sessions on Saturday.

But Larson, 20, driving the No. 32 Turner Scott Chevrolet, turned heads and turned what looked like it would be a battle between Busch and veteran Kevin Harvick into a three-dog Nationwide fight

“I was catching him. I wasn’t sure what I was going to do when I got to them,” Larson said. “I was pretty happy that Kyle (Busch) went low on that last corner because I knew it would give me one more shot to get by him.”

Busch’s No. 54 Joe Gibbs Racing Toyota led 92 of the first 225 laps but the real racing began about Lap 230 when Busch and Harvick approached a five-car group of lap traffic.

It took nearly 10 laps for the lead duo to clear the pack and, by the time they did, Larson was applying pressure.

The race took a turn on Lap 194 when leader Brad Keselowski appeared to shake loose from Regan Smith as the two approached the lapped car of Dexter Stacey. But as Keselowski pulled away, telltale smoke told of contact and a left-front tire rub.
Keselowski’s tire lasted five laps before giving out. He not only surrendered the lead to Harvick, but fell a lap down.

The next caution brought the Bristol safety crew to the assistance of driver Nelson Piquet Jr., whose car caught fire after a Turn 1 collision with Jamie Dick. Piquet scurried from the cockpit as flames leaked from the engine compartment.