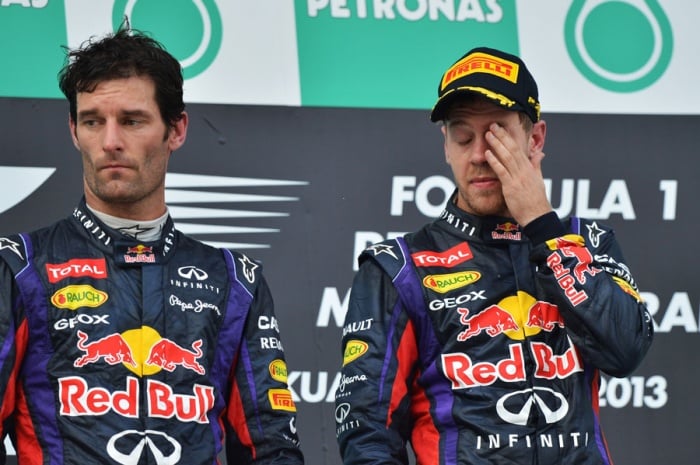 Mark Webber admits he will consider his future with Red Bull in the wake of the Malaysian Grand Prix.

Sebastian Vettel’s decision to ignore team orders and overtake Webber to win the race in Sepang left Webber fuming and claiming on the podium that Vettel “will have protection as usual” from the Red Bull hierarchy. Later, Webber was asked if the developments will make him consider his future with the team and maybe even in Formula One, to which Webber responded: “My mind, in the last 15 laps was thinking that many things, yes. Many, many things.”

Expanding further, Webber said his anger wasn’t solely based on the actions of Vettel in Malaysia.

“Let’s just say there were a lot of things going through my mind in the last 15 laps of the Grand Prix, lots of different reasons, not just from [the race] but also from the past. We’ll see what happens. We’ve got three weeks before the next race.”

Webber added that he will spend some time between races in Australia to contemplate his future.

“I think it’s very early days right now, it’s very raw, obviously, and we need to work out how the team goes best forwards from here. That’s obviously going to be discussed this week. I will be in Australia on my surfboard, the phone won’t be engaged, see what happens.”