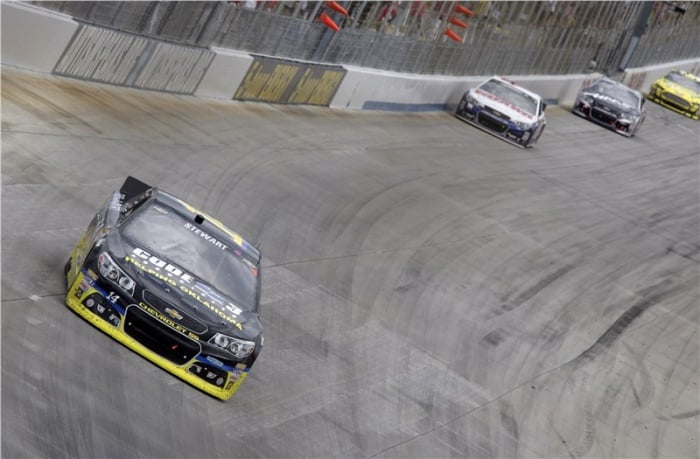 Victory lane was the last place Tony Stewart expected to end up when he strapped himself into his No. 14 Code 3 Associates/Mobil 1 Chevrolet SS for the FedEx 400 benefitting Autism Speaks NASCAR Sprint Cup Series race Sunday at Dover (Del.) International Speedway. Dont forget to take a look at the Dover International Speedway pictures below.

After all, winning from the 22nd spot on the starting grid in a racecar with which he’d struggled through practice and qualifying this weekend on a fierce, 1-mile concrete oval at which almost half (47) of the previous 86 Sprint Cup Series winners started no farther back than the front two rows, felt like nothing short of a monster task.

But Stewart, crew chief Steve Addington and the entire Code 3 Associates/Mobil 1 pit crew of for Stewart-Haas Racing (SHR) simply ganged up on the track affectionately known as the “Monster Mile.” Their late-race strategy call put the No. 14 Chevrolet in position to win, and Stewart, the three-time Sprint Cup champion, made a late-race pass and never looked back until he took the checkered flag for his long-awaited first victory of the season.

“If somebody would’ve told me it was going to be that way yesterday, I would’ve told them they were crazy,” said Stewart, who took the lead for the first time on lap 398 of the 400-lap race and led the final three laps en route to scoring his 48th career victory and his third at Dover. “This thing was not a car that could win the race. Just great pit strategy at the end. We had a car that was solid. We just never got track position to get in clean air. It felt a lot better up front.”

After the determined Stewart moved methodically forward from the 22nd starting position – breaking into the top-20 by lap 100, the top-15 by lap 200, and on the verge of cracking the top-10 by lap 300 – it was the call for a two-tire stop under caution that propelled the No. 14 all the way up to fourth place for a restart with just 19 laps to go. It took Stewart just four laps to snatch second place behind race leader Juan Pablo Montoya, and Stewart spent the next dozen laps plotting how he was going to get around the former Formula One race winner.

By lap 398, Montoya could hold off Stewart no longer. Stewart slipped past en route to what was, in his mind, a most improbable win.

“Steve Addington made a great call on that last caution and gave us the opportunity to race for it up there,” said Stewart, who continued his streak of winning at least one race per season since joining the Sprint Cup Series in 1999. “It didn’t seem like the guys who took four tires had a huge advantage taking off. When we noticed we were catching (Montoya), we kind of got going on the bottom there and realized we were making up even more time when we could stay right on the bottom. He was smart. He was watching, and he picked up on that and moved down. I couldn’t really make any ground there anymore, so I had to try something. Jeff (Gordon) was coming behind us. I was willing to risk running third to battle for the win. If it didn’t work out and I dropped back a spot, it was worth it. It’s fun. It’s fun when you can battle guys like Juan Montoya and Jeff Gordon like that. Those are two pretty cool names to be racing for the win.”

Stewart’s victory marked just the fifth time in 86 races at Dover that a driver had won from a starting position of 22nd or worse. Stewart swept both spring and fall events in 2000 and, oddly enough, started the fall race 27th. He won the spring race from the 19th starting position. Sunday’s win was Stewart’s 11th top-five and 16th top-10 in 29 career Sprint Cup starts at Dover, and it thankfully ended a string of five consecutive finishes of 20th or worse at what typically had been one of his more successful venues.

“Yeah, it’s been a while since we’ve had a good day here,” Stewart said. “Honestly, we tested here, which I thought would be an advantage coming here. And yesterday, we took two steps backward – it didn’t seem like we were much better. But I’m so proud of all of our guys and our engineers. They worked hard late into the night last night and never gave up. They kept working today. Addington’s pit strategy gave us the opportunity there at the end. It’s pretty cool. Everybody at Chevrolet has been helping us and, most of all, Rick Hendrick and everybody at Hendrick Motorsports and the engine department and the chassis department and Doug Duchardt. Just everybody has dug deep to help us to get back to where we are today.”

Most importantly, the victory – just his third top-10 of 2013 – put Stewart and the No. 14 team back on track for a shot at another Sprint Cup title during a season that until Sunday had been nothing short of frustrating.

“It’s been such a tough year,” Stewart said. “And we had, not new partners to us at Stewart-Haas Racing, but new partners on the No. 14 car with Code 3 Associates this week. And with all the tragedies in Oklahoma, to be able to do such an awesome job of getting everybody in Oklahoma back on their feet. They have saved over 150 animals and helped reunite 40 pets with their owners. It’s pretty cool what they do. I couldn’t think of a better week to celebrate what Code 3 Associates does and their hard work. It’s them and Mobil 1 and Bass Pro Shops, Rush Truck Centers, Coca-Cola and Sprint, and, most of all, it’s all of our fans out there. We’ve let them down for a long time. Hopefully today we’ll start building that momentum back up.”

Ryan Newman, driver of the No. 39 Haas Automation Chevrolet for SHR, finished 36th after getting involved in a mid-race accident.

Montoya finished .788 of a second behind Stewart in the runner-up spot, while Gordon, Kyle Busch and Brad Keselowski rounded out the top-five. Clint Bowyer, Joey Logano, Kevin Harvick, Mark Martin and Dale Earnhardt Jr. comprised the remainder of the top-10.

There were seven caution periods for 32 laps, with nine drivers failing to finish the 400-lap race.

Thirteen races remain before the 12-driver, 10-race Chase for the NASCAR Sprint Cup begins Sept. 15 at Chicagoland Speedway in Joliet, Ill. Only the top-10 in points are locked into the Chase. Positions 11 and 12 in the Chase are wild cards, awarded to the two drivers between 11th and 20th in points with the most wins. If multiple drivers have the same number of wins, a driver’s point standing serves as the tiebreaker.

Patrick, who is competing for Rookie of the Year honors against Ricky Stenhouse Jr., finished 11 spots behind Stenhouse, who placed 13th.

The next event on the Sprint Cup schedule is the Party in the Poconos 400 on Sunday, June 9 at Pocono (Pa.) Raceway. The race starts at 1 p.m. EDT, with live coverage provided by TNT beginning with its pre-race show at noon.

Clint Bowyer has completed the collage of pictures after Martinsville win