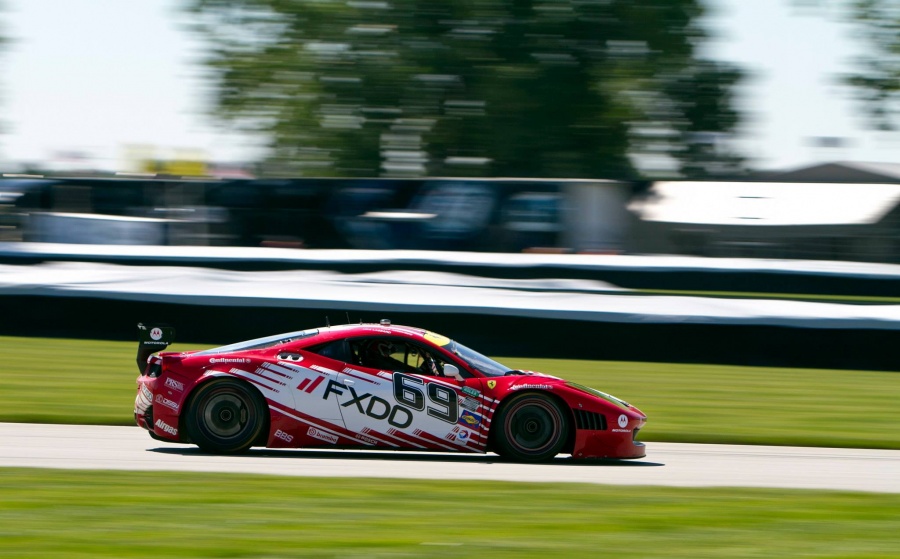 AIM Autosport Indianapolis Victory a First for New Team, First in GRAND-AM for the Ferrari 458 Italia in 2013

INDIANAPOLIS, Indiana – The No. 61 AIM Autosport Racing with Ferrari 458 Italia team scored its first victory, and the first of the 2013 season for a Ferrari in the GRAND-AM Rolex Sports Car Series, with drivers Jeff Segal and Max Papis Friday at the Brickyard Grand Prix on the road course at the legendary Indianapolis Motor Speedway (IMS).

The convincing win, that saw Segal lead the timed three-hour race’s final 13 laps and cross the finish line with a more than 10-second margin of victory, ended a string of disappointments and bad luck that has plagued the first-year AIM Autosport Ferrari team this year.

“I guess that the frustration that we had up to this point, and the so many close calls, just built up to this breakout and everything finally went our way today,” Segal said. “We had a great setup for the race car, we had great pit stops, and just fantastic strategy by the engineers on the pit box from AIM Autosport.”

Starting driver Papis rolled off from eighth on the grid and steadily worked his way to the front in his opening stint. He raced to as high as second before handing off to Segal just before the race’s halfway point.

“Today was really a team win,” Papis said. “It proved a never-give-up attitude pays off. We gave the first win to Ferrari of the year, it was in Indianapolis, and we give the first win to Remo Ferri. So, for us, this win means a lot more than a normal win. Today is proof that good things happen to good people.”

Ferrari was not the fastest car at this year’s Brickyard Grand Prix but the AIM Autosport team made up for it with fantastic driving, solid setup and great race strategy.

“Of all the race tracks we have been to, I did not think the first win would happen here,” Segal said. “We were really up against it. We did not have the fastest car here, we trimmed out everything we could as far as downforce, the car was evil to drive but it gave us the straight-line speed that we needed to just hang in there. It was the perfect way to get the first win for Ferrari this season.”

Prior to Friday’s Indy success, the No. 61 team and drivers had a pole and a third-place showing in Detroit in June as the highlights of the season. The AIM Autosport squad has been a contender and often the top team to beat in races all season only to be hit by a variety of motorsport’s bad luck. A fuel-stretching gamble late in Segal’s charge to the finish could have brought more disappointment, but he wasn’t about to ask how close the No. 61 team cut it.

“I didn’t ask, I don’t want to know, I am not asking any questions,” Segal said. “We won, we won at Indianapolis in a Ferrari; that is it, and it’s awesome!”

Next up for R.Ferri / AIM Autosport Racing with Ferrari and the GRAND-AM Rolex Sports Car Series is the VisitFlorida.com Sports Car 250 at Road America in Elkhart Lake, Wisconsin, August 8 – 10. The weekend’s featured race can be seen live on SPEED at 5 p.m. EDT/2 p.m. PDT on Saturday, August 10.

About AIM Autosport: Established in 1995, AIM Autosport is a professional Canadian sports team campaigning Ferrari 458 Italia GT race cars in the GRAND-AM Rolex Sports Car Series. AIM will defend its 2012 GRAND-AM Rolex Series GT Championship by entering two Ferrari 458 Italias for the full 2013 season. AIM’s success has been achieved through the dedication of its employees and the continuous support of team’s commercial and technical partners. Away from the track, AIM Autosport’s technical and administrative headquarters are situated in the Toronto suburb of Woodbridge, Ontario. For more information visit www.aimautosport.com and http://www.facebook.com/AIMautosport.