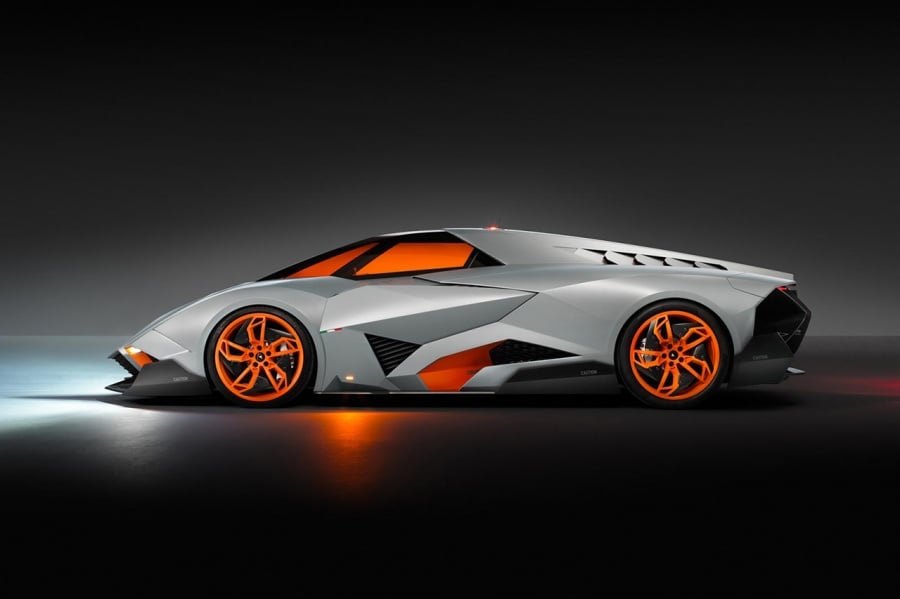 The Lamborghini Egoista is a limited production sports car unveiled by Lamborghini. It was built to celebrate the company’s 50th anniversary. Only one Egoista will be made, and it is a fully functioning model based on the Gallardo. It features a 5.2 L (317 cu in) V10 engine producing 600 hp (447 kW; 608 PS).

It has a unique canopy door and the cockpit, which is modeled after a modern fighter jet and completely removable, has only one seat for the driver.

The unique exterior of the Lamborghini Egoista is meant to resemble a bull ready to charge if looked at from the side. The lighting resembles that of a modern airplane, with sidemarkers and indicators on the sides and top of the car as well as front and rear. The bodywork consists of active aerodynamic panels that raise and lower for optimum downforce and stability. The body and wheels are made of antiradar material to even more identify with jet fighters.

In Italian, Egoista literally means “selfish.” According to the model’s designer Walter de Silva, the Egoista “represents hedonism taken to the extreme.”

The exterior of this concept became even wilder once Lamborghini released the official images. As you can see from the overhead image, the F1-style nose is even more exaggerated than it originally looked, as this concept takes on a UFO meets the Batplane look.

Up front, the Lamborghini Egoista features a carbon-fiber trunk lid, a pair of LED headlights that seem to glare at you with evil intentions, and well-formed air intakes that are both functional and elegant. The hard angles you see from the front end are at first a little scary and rather overwhelming, but after examining them, you’ll find that they are actually well done and flow well with the theme of the car.

“It is a car for itself, a gift from Lamborghini to Lamborghini, resplendent in its solitude. The Lamborghini Egoista is pure emotion, Never Never Land, which no one can ever possess, and which will always remain a dream, for everyone” was the exact quote from Lamborghini in reference to the Egoista. We think this statement alone lets us know that this beast will never make its way into production. That’s likely a good decision, given its extreme design.