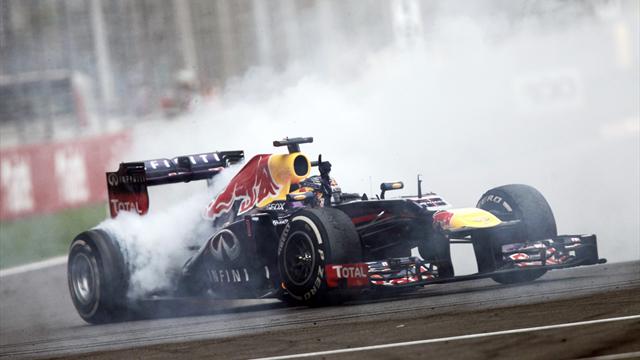 Sebastian Vettel and Red Bull Racing fined and have been given a reprimand by the FIA after his tire smoking donut display after the Indian GP.

Officially, it was for failing to proceed straight to parc ferme after the checkered flag ‘without unnecessary delay.’

The punishment might have been worse but the stewards accepted that there were ‘special circumstances.’ Meanwhile Vettel told the FIA that he knew exactly what he was doing and thus it was no surprise when he was called up.

“I didn’t think about the donuts before the race today – it just happened,” said Vettel. “My engineer directed for the usual procedure, but I said ‘not this time!’”

While fans may not welcome the decision, the bottom line is that the FIA had to set a precedent by giving some sort of punishment, as the rules are clear to all drivers.

Given the coverage that his display will receive, the 25K fine is probably a small price to pay…

I’ll stand up with Vettel for the donuts in his meeting with the stewards. Glad I’m not the only 1 in trouble for them this year! Lol #F1

Red Bull Racing Fined For This…