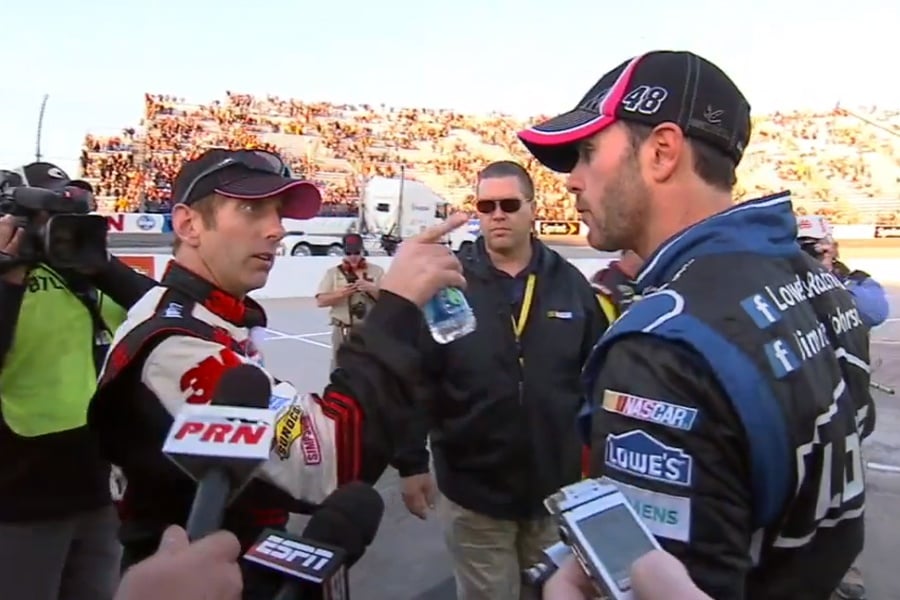 Johnson was about to be interviewed by members of the media when Biffle rushed up, grabbed Johnson from behind by the collar and yanked him around.

The exchange was brief but intense.

“Hey, you knocked my (expletive) rear bumper off,” Biffle charged.

“You (expletive) ran into the back of me,” Biffle continued, eventually warning Johnson “You better watch it.”

Biffle then turned to walk away before Johnson grabbed him by the arm and said, “If you want to talk about it, we can talk about it.”

The Roush Fenway Racing driver countered with “I just did.

It appeared that contact from Dale Earnhardt Jr. shortly before the halfway point of the 500-lap event initially dislodged the bumper cover from Biffle’s car.

“Really (for) about a five-lap window, I was trying to get by him and I was inside him two or three times,” said Johnson, who finished fifth. “We made contact and I didn’t quite understand why he was down (here) like he just did, but we’ll get it sorted out.

“Short-track racing at its finest; things get heated up and there it was right there. … I was surprised he was still that pissed but he came down and was obviously pretty mad.”

The bumper cover eventually became loose a second time, and Biffle, running seventh, had to pit under caution to allow his crew to remove the cover entirely. As a result, he restarted the race 27th with just over 100 laps remaining.

“We finally had a good car at Martinsville and drove our way all the way up into the top 10,” Biffle said. “We were running sixth or seventh there. And just got our rear bumper tore off and, you know, it takes a lot to get a rear bumper to come off.”

Biffle said he would go back and look at the incident in question. “But he claims he was inside of me,” he said. “But it sure felt like he hit me from behind and rubbed it across.”

Johnson, who exited Martinsville tied with Matt Kenseth in the points standings (Kenseth owns the tiebreaker), said he expected the issue with Biffle would get worked out.

“Greg … was pretty upset,” he said. “As we talked, he seemed to calm down quite a bit. I know how it is when you climb out of a race car and you’re mad (and) upset.”

I Apologize for the way I acted towards @JimmieJohnson after the race,hard racing and I know the bumper had damage already but not dragging

Greg Biffle, Former NASCAR driver has been declared guilty in the invasion of privacy case