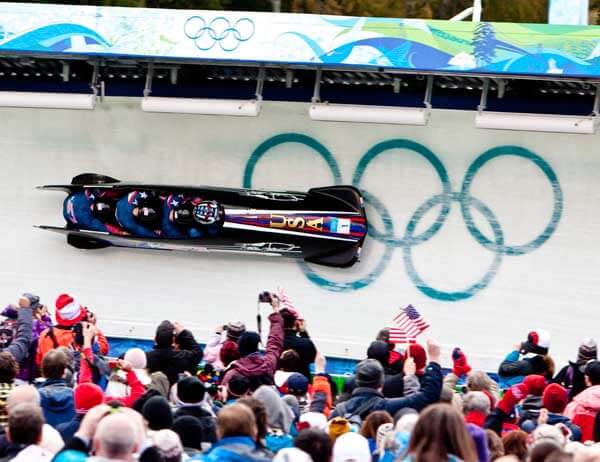 Geoff Bodine Bobsled Team brings the former NASCAR driver to more international bobsled courses than racetracks these days. Although the name may sound foreboding, there’s nothing sinister about the ‘Night Train.’ It is a name that simply signifies speed and at the Winter Olympics in Vancouver, Canada, earlier this year, it translated into gold for the United States four-man bobsled team.

“Night Train,” a product of the Geoff Bodine Bobsled Project, brought Chemung native and Daytona 500 winner Geoff Bodine’s nearly two-decade old dream to fruition. The men’s gold medal and the bronze earned by the women’s bobsled team came eight years after the Winter Olympics in Salt Lake City when the U.S. team enjoyed the podium for the ﬁrst time in decades.

In 2002, the wornen’s team earned the gold, while the men won silver and bronze in the four-man competition. However, it was nearly two decades after Bodine decided he would provide his speed-loving fellow Americans with a competitive bobsled that the United States four-man bobsled team earned a gold medal — the ﬁrst in 62 years.

“Winning the gold medal in the four-man event is like winning the Daytona 500,” he said, “It’s the biggest, baddest race you can win. Without this sled, it wouldn’t have happened.”

Geoff Bodine bobsled march to the Olympic gold began in 1992 in the middle of Speedweeks at Daytona International Speedway. That’s when he ﬁrst learned of the United States’ struggling bobsled effort while watching the Winter Olympics.

“I found out they were using secondhand European equipment,’ he said. “They had to buy the equipment themselves. I thought that was wrong. So I decided to build our athletes American-made bobsleds. I didn’t think it was right they had to buy their equipment to compete in the Olympics, so I said I would let them use them for free. We design and maintain the bobsleds at no charge to the athletes. We’re not-for-proﬁt.”

Geoff Bodine bodsled developer won 18 NASCAR Sprint Cup Series races, including the 1996 Bud At The Glen, noted it was his success in NASCAR that allowed him to create and fund the project. Sponsors Whelen Engineering, Jegs Automotive, Lucas Oil, Lincoln Welders and Summit Building also have been instrumental in the project’s funding.

Geoff Bodine bobsled project began shortly after Speedweeks ended in 1992. However, he and Bob Cuneo, owner of Chassis Dynamics, didn’t have much time to develop a new sled since the Olympic Committee decided to start alternating the Winter and Summer Olympics. That meant the Winter Olympics would by held in 1994, providing them with less than two years to develop a bobsled.

“Bob Cuneo and I didn’t know anything about bobsleds,” admitted Bodine, who described each bobsled as a labor intensive project. “We had to learn to build them, what made them go fast, what the athletes liked and what they didn’t like.”

“We didn’t copy anyone. We did our own design and it was completely different from anyone else’s. It took a lot of hard work and a lot of late hours, but we pulled it off. We went to Norway two years later with a fleet of 15 bobsleds. That was my goal – to supply American-made bobsleds for American athletes at no charge.”

Since then, the U.S. Geoff Bodine Bobsled Team has emerged as a contender in the international bobsled arena and changed the way the sport is viewed.

“Really, we’ve changed it for the better which is a neat thing,” said Bodine who now lives in Melbourne, Florida. “When I go to an event, athletes, coaches from the other countries, they like me, because indirectly I’ve helped their programs. It’s pretty neat to be in that environment.”

Some of the Europeans also now desire to own the $50,000 to $55,000 carbon ﬁber composite Geoff Bodine bobsled. Bodine, however won’t sell it to them. He and Cuneo designed and built it strictly for the United States team, and that’s the way it’s going to stay.

“We’ve been offered a large amount of money for some bobsleds,” Bodine said. “All the countries, all the athletes, all the coaches, they know our program. They know I did it for our country, our athletes. But we were tempted.

“The money was dangled out in front of us to see if we would cave in and sell some of our equipment, but we said no. We didn’t do it for proﬁt. We did it for our American athletes and no one else. I guess they had to tempt us to see if we really meant it.”

Bodine, who brought power steering to the Sprint Cup Series circuit in the early 1980s, and Cuneo, used their racing knowledge to gain the advantage.

“A lot of the design, engineering and mechanical things we took from NASCAR and applied to bobsledding,” Bodine said. “The biggest thing was the importance of testing and getting data from those tests, looking at that data and understanding what it meant and then making adjustments from it.”

That’s how the “Night Train,” the intimidator of bobsleds, was built. It’s a moniker, however, that wasn’t planned.

“This ‘Night Train’ was painted ﬂat black and the reason was we didn’t have time to paint it when it went into service.” Bodine said. “It was awesome, bad fast, so the athletes, like any racer a little superstitious, said don’t paint it. We want it flat black. So, we left it ﬂat black. They went out and won a championship with it and they said, “Man, don’t touch it.”

“There is no question we have raised awareness of bobsledding in our country and increased the popularity of it and interest in it,” Bodine said. “The proof of that was in the last Olympics. It has been a fact that the TV network show, whatever came after figure skating, the ratings went down, This year, when they went from figure skating to bobsledding the ratings didn’t drop; they stayed steady.

“We feel like our involvement in the sport has gotten people interested. Everywhere we go in racing, when I walk in, people want to know about the bobsleds. It makes you feel really good.”

The Bo-Dyn Bobsled Project has now relocated from Oxford, Connecticut to the Charlotte, North Carolina area, but has yet to find a permanent home in the Tar Heel state. Goodyear is allowing Bodine to store the sleds in a Cornelius warehouse. Bodine said Cuneo has decided after 18 years he wants to step back from the business and be involved simply as a consultant.

“We decided because of our NASCAR racing involvement that has been there from the beginning, let’s move everything to the Charlotte area and we can employ some of the greatest fabricators in the word who live in that area,” he said. “We just thought it was a natural ﬁt to move everything to North Carolina.

“We are at the summit of our project. We are not sure if we want to turn it over to the Bobsled Federation or continue with it the way we have been going, or maybe go in a little different direction with the project. One way or another, we are staying involved with the sport. We just aren’t sure what direction that is.”