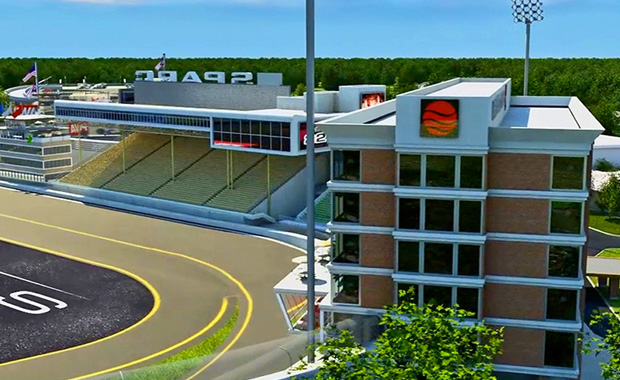 Arshot Investment Corporation has been working for several years to repurpose the vacant Cooper Stadium site on the near-west side of Columbus, Ohio, by converting it into a multi-use Sports Pavilion and Automotive Research Complex ( SPARC ).

The SRARC project will feature a paved half-mile track and will be anchored by a Technology Center designed to facilitate and showcase the Columbus region’s many contributions to automotive innovation.

The SPARC project has partners like NASCAR racing team Michael Waltrip Racing. “We are thrilled to have this opportunity to participate in the SPARC project,” Waltrip said. “Michael Waltrip Racing prides itself on being innovative and forward-thinking, which is why we were so attracted to the SPARC concept when first approached by Arshot. We think its unique combination of uses–particularly its emphasis on automotive research–is perfect for the site and makes it unlike any other track facility in the nation.”

In partnership with selected businesses and educational institutions, SPARC will allow automotive engineers and technicians to use the track regularly for testing vehicle designs, fuel systems and performance. At other times the track will be used for driver training, for consumer education and sales and, with seating in the preserved grandstand, for staging a wide variety of sports and entertainment events.

To support all of these various functions, the project will also include a lodging facility, conference center, exhibition spaces and restaurants. A key element for success of the project is its highly-visible location on I-70, just one exit from downtown Columbus. Columbus lies directly in the center of the State of Ohio and within a 500-mile radius of over 50% of the U.S. population. Traffic counts at the site provide approximately 100 million impressions per year.

SPARC is designed to facilitate and showcase the Columbus region’s many contributions to automotive innovation.  In partnership with selected businesses and educational institutions, the track will be used regularly for the development and demonstration of advanced vehicle technology.  A newly-constructed Technology Center, with indoor exhibition space, will allow vehicular access to classrooms and workshops on each of its multiple levels.

SPARC’s paved half-mile track with preserved grandstand seating will be used for staging a wide variety of sports and entertainment events, including motorsport and non-motorsport events. An emphasis on electric racing events will highlight the performance capabilities of alternative fuel vehicles.