We’ve been covering this story since July 2014. A new short track speedway will always grab our attention. The racing community in in desperate need of positive news on the short track side with tracks closing all over the county.

This is not the first time the new asphalt speedway short track has been hit with construction delays. Arshot Investment Corporation promised to open in 2012. A later press released announced a new date of 2014. Both of those dates came and went.

So what’s going on with the Cooper Stadium project?

But why isn’t the Cooper Stadium project started yet?

We thought it would be up and going within the past year. Nothing has happened over here at all! 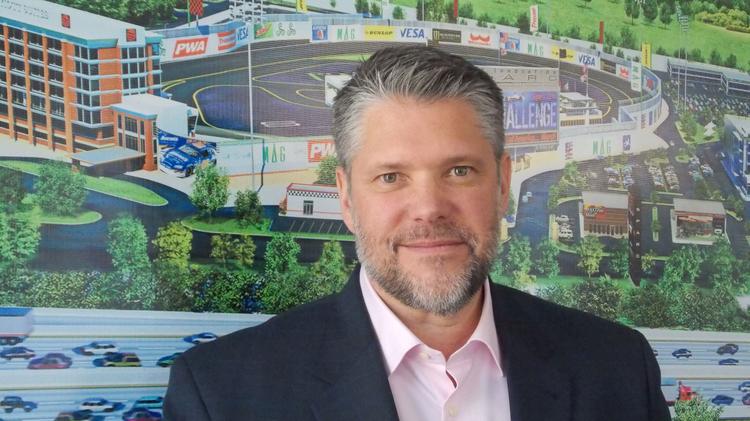 Brett Roubinek was recently hired in 2015 as the President to transform the 47 acre Cooper Stadium site into the Sports Pavilion & Automotive Research Complex (SPARC).

Brett’s racing career started in sports cars. He went to Syracuse University where he pursued his Master of Business Administration and that landed him in the heart of one of NASCAR’s most competitive divisions, the NASCAR Busch North Series.

Brett’s driving is career was not limited to the track, as he also appeared in both commercials and film as a stunt driver.

In 2001, he worked for the Skip Barber Racing School where Brett managed the Instructor corp for the largest racing and driving school.

In 2006 Brett Roubinek was named the COO of the popular sim racing game iRacing.com. He maintained that position until 2009.

In 2010 he took a job as the Vice President of Sale and Marketing at the Mid-Ohio Sports Car Course. He remained there until April 2014.

In April 1015, he was hired as the President of the SPARC development project.

It will be decided in the near future as to whether he’ll break ground this winter or when it thaws in the spring of 2016.

The recent development problems were related to storm water. Apparently, an engineer saw the problem and the project was forced back to the drawing board. However, that issue was resolved, on paper, in March.

So when will SPARC open? A new date has been set for the grand opening race weekend at the Sports Pavilion & Automotive Research Complex (SPARC). Brett Roubinek says 2017 is a ‘safe’ estimate. In 2017, the old baseball skyboxes will be turned into automotive suites. A new 1/2 mile racetrack will replace the weed filled baseball field with a new 9,700 square feet billboard hanging outside the track.

That comes first. After the track construction is complete the developers attention will turn to the hotel and conference center.

While 2017 is the new safe estimate for the grand opening, they have hopes to open things before that date. Cooper Stadium developers hope to have a small part of the facility open in 2016.

Arshot Investment Corporation with it’s many investors are spending $45 million on the SPARC project. They say all tenants that promised to move in are still on board, despite the later than expected opening of the race track.

Who are those tenants they have lined up? Midwestern Auto Group is one of them. They are a high-end car dealership offering brands like Aston Martin, Bentley, Ferrari, Lamborghini, Lotus, Maaserati, Porsche and Rolls Royce.

Who else? The other tenant set to move into SPARC is Clean Fuels of Ohio. Clean Fuels Ohio is a non-profit organization that improves air quality and health, reduces environmental pollution

When it’s finished in the new date of 2017. The SPARC Stadium will seat 8,500 people.  The complex will also include the Richard Petty Driving School on the 1/2 mile asphalt speedway. Along with the new oval speedway, an indoor racing track will be open to the public.