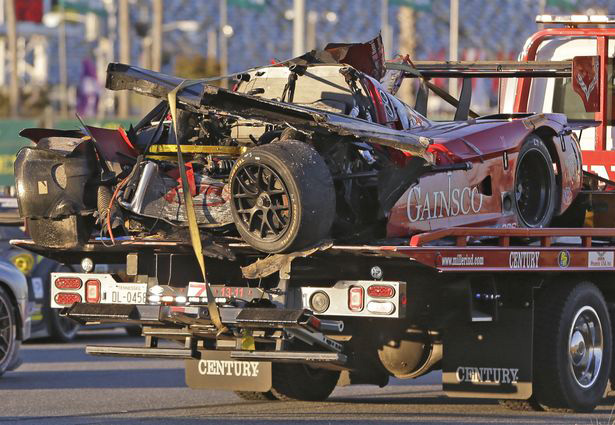 A violent wreck involving two drivers marred the opening stages of the Rolex 24 Hours of Daytona. See the Rolex 24 crash video below.

Shortly before the three-hour mark of the 24-hour endurance classic, Memo Gidley slammed into the rear of a near-stationary car driven by Matteo Malucelli. Rescue crews needed to extract Gidley from his car, and both drivers were immediately transported to Halifax Medical Center located minutes from the track, bypassing the infield care facility.

In a statement, the International Motor Sports Association said Gidley and Malucelli were “awake, communicating and undergoing further observation.” No additional details were released about their respective conditions.

Gidley was behind the wheel of a Daytona Prototype — the fastest of four classes that are competing at Daytona International Speedway. His No. 99 Corvette was the fastest qualifier overall. Malucelli was in a Ferrari 458 Italia, from the GT Le Mans class.

The accident occurred in the infield portion of the road course, which also incorporates parts of the banked oval used by NASCAR. Malucelli’s car appeared to lose power exiting the high-speed International Horseshoe and heading into a bright sun when Gidley ran into him.

Officials placed the race under a red flag for nearly 90 minutes. This was the first red flag issued since 2004 when heavy rain altered the proceedings for almost three hours.