The prototype win wasn’t without controversy, view the race winning pass video below. Ricky Taylor and Filipe Albuquerque tangled with about 7 minutes remaining in the 24 hour endurance race in Daytona Beach, Florida. It was a move Ricky Taylor describes as “a badass move.”

The No. 10 Konica Minolta, ran inside the top three throughout the 55th Rolex 24 At Daytona. Jeff Gordon entered his first Rolex 24 stint as the leader early in the race. His very first lap resulted in contact with a driver exiting the pitlane, on a restart. He slid into the corner on cold tires, it resulted in slight contact. The driver he made contact with was penalized for exiting a closed pitlane. Neither driver received a penalty for the contact.

RELATED: Jeff Gordon, “I never said I was retiring” 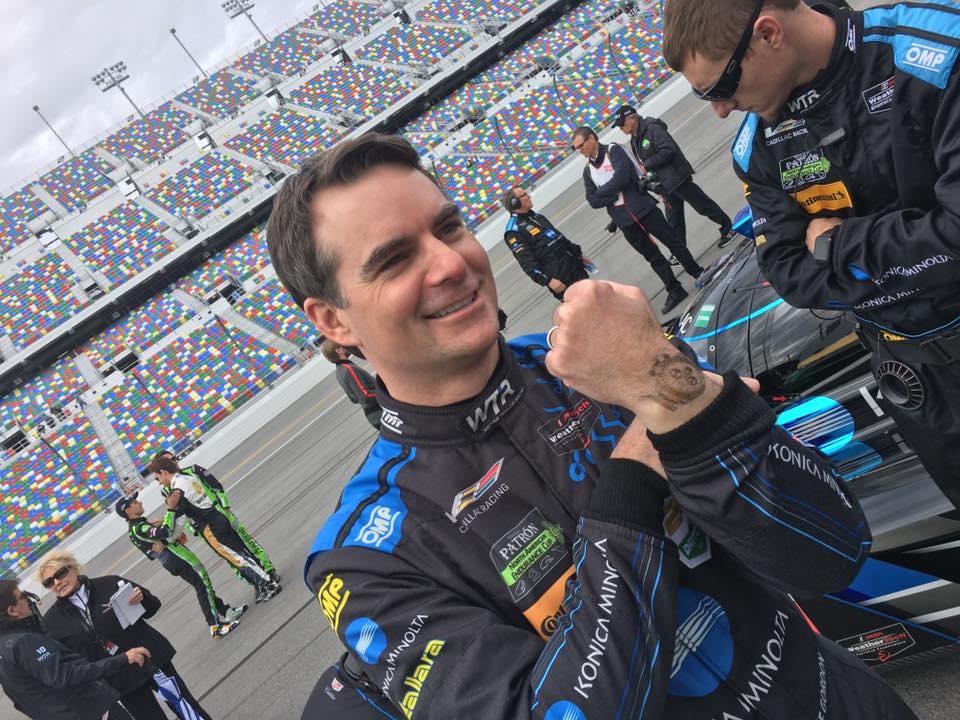 Before the 24 hour race started the team drivers placed tattoo’s on their wrists. Not real one’s obviously. Those tattoo’s were of a Rolex watch. All 4 can now replace their tattoo with the real thing. All 4 have been awarded the winner Rolex watch.

Wayne Taylor Racing has finally won the Daytona endurance race. The team has finished second, four times. They can now display the Rolex 24 at Daytona trophy in their Cadillac racing shop.

The No. 10 Cadillac – was co-driven by Jordan and Ricky Taylor, Max Angelelli and retired NASCAR star Jeff Gordon – had a total of 13 Patrón Endurance Cup points at the 18-hour mark to take a one-point lead over the No. 5 Mustang Sampling Racing Cadillac DPi-V.R, the team that has won all three previous Patrón Endurance Cups in the Prototype class.

Ricky Taylor snatched the victory from Filipe Albuquerque last in the 24 hour race. Filipe Albuquerque ran a blocking line on the entry of turn one, that sacrificed his corner speed and allowed Taylor to the inside, but just barely. Albuquerque proceeded to take his normal entry into the corner. Given he had a car to his inside, he spun himself out. Many will take an alternative view to that, but that’s what happened. When you chop across the front nose of another car, you’re going to spin. Every time.

That was a badass move.

Action Express Racing Team driver Albuquerque see’s the incident very differently, “I don’t think I lost the race, to be honest, because I don’t race like this,” he said. “He hit me in the back. You can see in the car, so I spun. He didn’t even wait for me. He just took off. So if the officials don’t agree that it’s a penalty, OK, that it can be a fair play by Wayne for the fight. But it didn’t happen, so it’s what it is.”

Filipe Albuquerque continued to talk about the Rolex 24 closing laps incident while racing for the lead. In his post-race press conference he stated, “I closed the door. And got hit.”

IMSA officials offered no penalty on the pass (probably because it’s hard to penalize a guy when he wrecks himself). If a car pulls up 4 feet along side of you, and you turn into the corner like he’s not there, you’re going to spin! That blocking behavior is one excepted in road-course racing. Taylor is not at fault here.

It’s a very different story if Taylor went to the inside and slid way up the track, into Filipe, because he carried too much speed to hold the corner. But that’s not at all what happened here. Taylor was all the way on the inside line, nearly in the grass. Filipe Albuquerque made the decision to take ownership of the entire racetrack and it might have cost the team the win. It’s blocking, gone wrong. 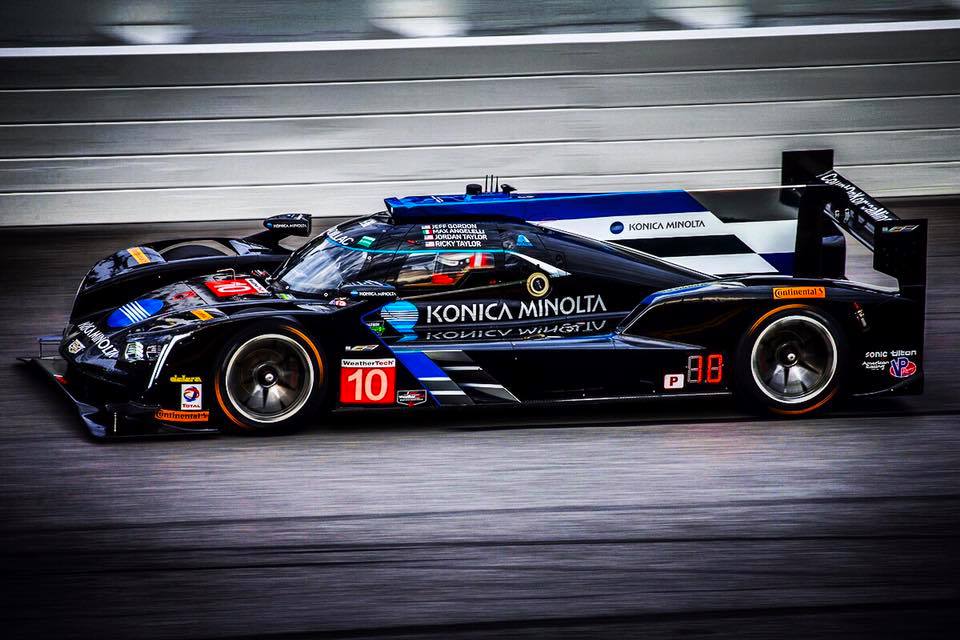 Wayne Taylor, team owner, spoke on the Rolex 24 winning pass, “I knew it was going to stick. It was a really good move by Ricky. Thank the officials also from IMSA for calling it the way they did because you could have called it either way. Clearly, Ricky was quicker and getting held up like that at the end was not a nice way to end. At the end of the day, we’re happy because Ricky was quicker all the time. He made a silly move, but we knew were going to win this race.”

Ricky Taylor spoke on the Rolex 24 final laps pass for the lead in a post-race press conference, “That was a badass move.”

Ricky Taylor continued to explain his take on the race winning pass, “I’ve been working on it for awhile (the pass). It’s the 24 hour, so you’re going to take a risk. The way I saw it, he’d been struggling in turn 1. All day the car didn’t look very good there and we were really strong on the brakes.”

He spoke more on the pass for the lead, “I’ve thought about doing this for years and years. People always open up after that little kink in turn 1 (swing wide). It’s just so easy to release the brake and pop in there. If you get enough alongside you can make it work. I think he saw me coming, he saw me committing and like he said, he closed the door. If he knew I was committing, why would you close the door and make us crash?” 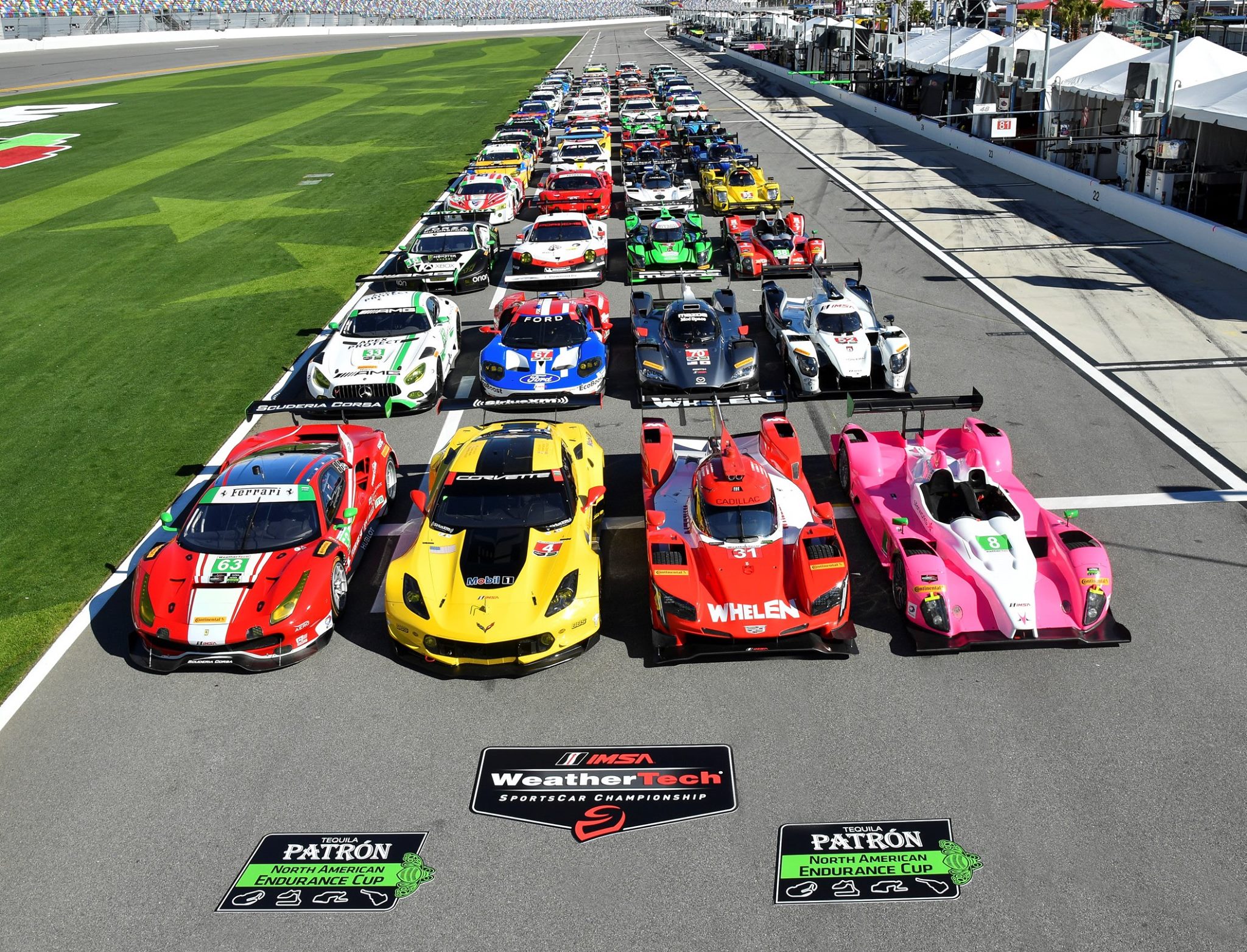 Jeff Gordon spoke on winning the Rolex 24 at Daytona in the post-race press conference, “I’ve become a big fan of this team (after driving for them in 2007) by being a part of it. I’m a big fan of the series. This race especially.I’m so thankfully from when I got that call from Wayne in 2016, asking if I wanted to be apart of this. ”

Jeff Gordon talked about driving the Cadillac DPi-V.R, “It’s like a dream come true for me because I’ve always dreamt about driving a car, a beautiful, amazing car that could handle like this. [A car] that had the technology like this and could compete at a race like this. This is very surreal to me.”

This was the final race for Max Angelelli. He has announced his retirement. He did it in style, exiting his car from the lead. Then winning the 2017 Rolex 24 at Daytona. He talked about finishing his racing career, “Wonderful. I’m speechless. I could not believe it. Finish my career with a win, a big win like this one, the Rolex 24.”

Cold and rainy conditions led to a lengthy full-course caution period during the third quarter of the race. The race was run behind the safety car from the 14:48 mark until restarting at 16:25.