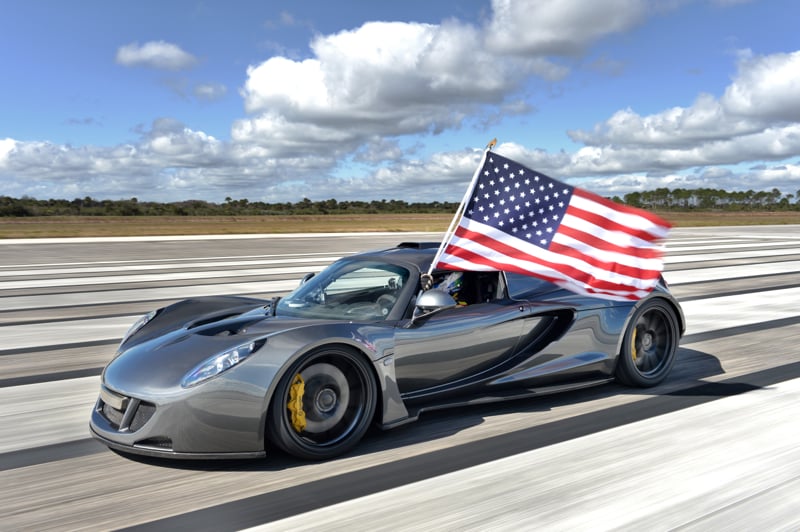 A representative from Racelogic, world-renowned maker of GPS data-acquisition systems, was on hand to independently verify and document the Venom GT’s speed record. “The Venom GT attained a maximum speed of 270.49 mph as measured by our VBOX 3i GPS system,” said Racelogic engineer Joe Lachovsky.

The VBOX GPS data showed that the Venom GT was still accelerating at an average rate of 1 mph per second as it took just 10.1 seconds to go from 260 to 270 mph. The record run was made over a distance of 2.4 miles, which allowed the Venom just eight-tenths of a mile to stop after setting the World’s Fastest Car record speed. Thankfully, its Brembo carbon-ceramic brakes were able to haul the car down from 270 mph well before the end of the runway’s 1000-ft. threshold.

“I knew the car had it in it, but it’s a thrill to officially validate the Venom GT’s 270-mph speed,” said Hennessey CEO Don Goldman. “Venturing anywhere above 200 mph—let alone 270—is not to be taken lightly, and we’re elated to have accomplished our goal.”

The Hennessey Venom GT team can now add World’s Fastest Car to its growing list of speed records. The Venom GT also owns the title for world’s fastest from 0-300 km/h (13.63 sec.) and 0-200 mph (14.51 sec.). With a curb weight of 1,244 kilograms (2,743 lb.) and a power output of 1,244 bhp from its 7.0-liter twin turbo V8 engine, the Venom delivers 1 horsepower per kilogram of curb weight, making it the hardest-accelerating and fastest series-produced vehicle in the world.

Achieving the World’s Fastest Car world record is a dream realized for company founder and president John Hennessey. “I wanted to be an astronaut when I was a kid. Neil Armstrong was my childhood hero. Even though the astronaut thing didn’t work out for me, I am humbled to have had the opportunity to set our speed record on the hallowed grounds of the American space program,” said Hennessey. “Building and validating our Venom GT as the world’s fastest has been a long journey and a lot of hard work. But as President Kennedy once so eloquently said, ‘We choose to go to the moon in this decade and do the other things, not because they are easy, but because they are hard.’ As a result we have built a better car and a better team at Hennessey Performance (HPE).”

“It was still pulling,” said driver Brian Smith after the World’s Fastest Car record run. “If we could run on an 8-mile oval we could go faster than that. On the very top end there was a little wandering but, hey, we’re going 270 mph! The Venom GT didn’t required any big corrections, and the Michelins held traction really well.”

To date, HPE has built and delivered eleven Venom GTs to owners around the world. Each vehicle is built to order and takes six months to complete. As the production run will be limited to a total of just 29 units worldwide, the Venom GT is not only the fastest but also one of the most exclusive hypercars ever produced.

Its components and systems, by necessity, need to meet the extraordinary demands inherent in achieving such rarefied velocities, and the Venom GT’s Pennzoil Platinum synthetic motor oil is no exception. Said Chris Hayek, Global Brand Director for Pennzoil: “We constantly pursue the latest advancements in technology, and we couldn’t be more excited that Hennessey Performance achieved this world speed record using Pennzoil’s new full synthetic motor oil made from natural gas.”

Keselowski says Harvick still has the fastest car in the field