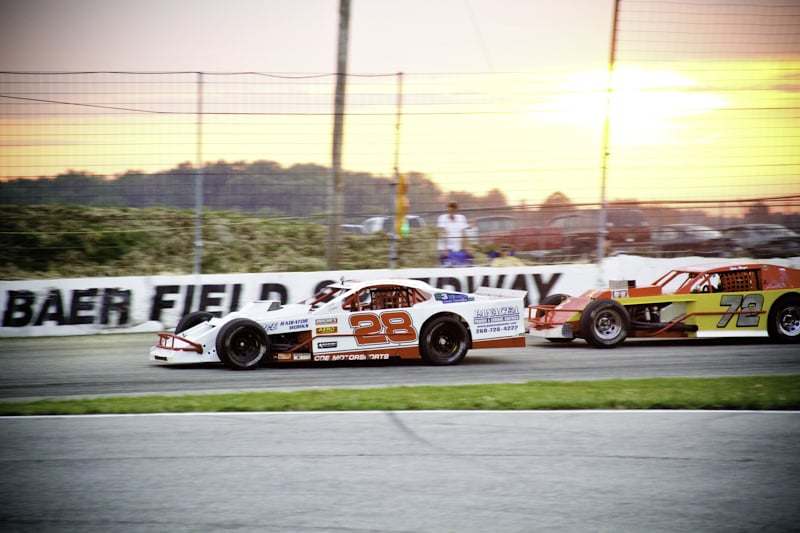 It is with great sadness, that a Fort Wayne tradition is closing its doors. Jon Raney announced today that, effective immediately, Fort Wayne Baer Field Speedway is ceasing operations.

In an interview with Blake Sebring of the News-Sentinel, Fort Wayne Baer Field Speedway promoter Jon Raney said, “I don’t want to go through this anymore. The main problem is the decline of attendance for the grandstands and a lot of that is due to the racers tearing down the place in social media. I build up the facilities and the racers don’t reciprocate it to me. It’s just a negative weight for me.”

Raney, a former racer took over the Fort Wayne Baer Field Speedway in late 2012 after the retirement of the late Tom Isch. Under his leadership, the Baer Field Speedway saw sweeping changes, with modernized facilities; a substantial project to clean and freshen up everything; increases to the weekly prize money; and bold, new shows, aimed at bringing in new fans. And, last year, it all worked.

“It all started,” said Raney, “when we tried to listed to our fans and be a good neighbor to the surrounding area, by mandating mufflers on the racecars. Despite the fact that noise is the #1 cause of racetrack closures over the last 20 years, and that mufflers are mandated at almost every track within 200 miles of Fort Wayne, our drivers rejected them in a very public manner on social media and many others flat refused to put them on their cars this summer.”

The next battle for Fort Wayne Baer Field Speedway was over driver safety. “Most people don’t know this,” said Raney, “but Fort Wayne, Indiana, is the sport and entertainment insurance capitol of the world. Through K & K (our insurer), that industry was virtually invented in Fort Wayne. As we operate in their backyard, we have to do everything we can to dot every “I” and cross every “T” that they require. As such, Fort Wayne Baer Field Speedway instituted some new rules this year, mandating that every car pass a safety inspection.”

“One of the new items Fort Wayne Baer Field Speedway now requires is a collapsible steering column, just as has been standard in EVERY passenger car for decades. Our mandating that, is a direct result of an accident we had last year, where a driver was injured and ended up off work and unable to walk for over four months. Happy to say he’s now well and even returned to racing, but he would have walked away from the incident had he had that installed beforehand.

It’s a $120 item, but you would think we’re the worst people in the world for making guys install one. Or have a helmet manufactured in the last 15 years, or seat belts that are no older than the manufacturer recommendations, or anything else meant to keep them safe. Fort Wayne Baer Field Speedway was just absolutely trashed on social media for forcing our racers to look after their own safety.”

“A few weeks ago, we had some people at Fort Wayne Baer Field Speedway from our insurer, who noticed that people were going around the pit area shirtless and in open-toes shoes. Both of which are in violation of track policy, as per insurance regulations in a restricted-area. When I informed one gentleman that he needed to put on a shirt, he said he’d kill me before he put a shirt on.

When I informed a lady she needed to change her shoes, she told me to ‘f-off’! And, it’s not just necessarily idle threats. I had someone come to my house and assault me, because I refused to refund his money after he was thrown out of Fort Wayne Baer Field Speedway by the police for being intoxicated and unruly.”

Raney also addressed a few weather cancellations at Fort Wayne Baer Field Speedway this season, which were also met with discord. “Last weekend, it rained hard all morning and at 1:00 pm, the forecast was for a 90% chance of rain from 6-8 pm that evening. So, we called off the show. 90 minutes later, the sun is shining and the forecast changed to ZERO chance of rain from 6-8, but we can’t UN-cancel. I mean, it’s not MY fault, I didn’t make the forecast.

I’m just reacting to it and trying to do what’s best for my business and my competitors and fans. Trying to spare them from a wasted day of sitting in the rain. And, of course, I’m savaged on social media for my decision. The yesterday, we announced that because of lack of interest (4-5 cars vs. 70+ competitors on Saturday’s) we were cancelling the policy of practice every Wednesday. Again, a social media firestorm, despite attendance showing that less than 20 people had shown for any of the last THREE practice days.”

“I just don’t need this! I have people calling my trucking business and threatening me and my staff. I paid to have our business evaluated as to our social media profile, and find that our approval rating is just above Congress. Even though a VAST majority of those who participated, have either never been to the Speedway, or haven’t been in over 10 years.”

“How do you fight that? How can Fort Wayne Baer Field Speedway advertise our way out of that?”

“I’m heartbroken. I have three years left on a lease and had plans for renovating the Fort Wayne Baer Field Speedway grandstands, replacing the track lighting, a new scoreboard, and more. I can’t throw money at the problem and hope to fix it. Especially when the biggest obstacle, is the attitudes of the very competitors who are the stars of the show. The very people who should be our best ambassadors!

No other entity in sports allows their competitors to trash it (the sport) on social media. And the stars of those sports seem to be able to see the big picture, but for some reason short track racing has turned a blind eye to this behavior and it’s just out of control. And it’s not just here; it’s a problem brewing in this business everywhere.”

“To those who were not a part of the problem and the fans, I apologize. To my staff, I thank you for all your tireless hours and your support. Maybe we can work together again sometime.” So, for now, the venerable speedplant on the south side of town will be silent.