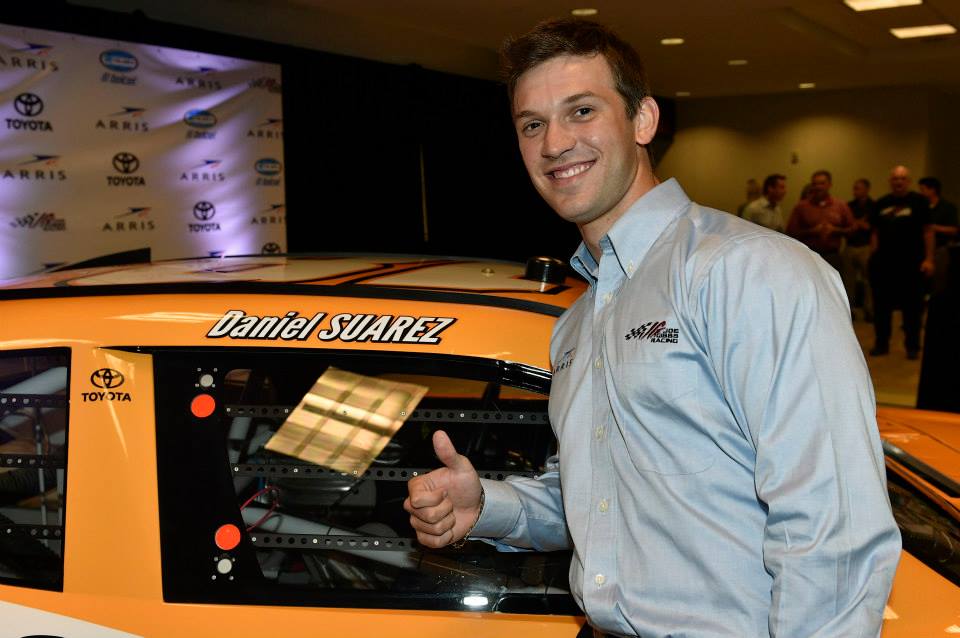 HUNTERSVILLE, N.C. (August 19, 2014) – Daniel Suarez to Joe Gibbs Racing as the driver will join the organization in 2015 to compete full time in the NASCAR Nationwide Series.

In addition, ARRIS Group, Inc. will support Suarez in a multi-year program, starting with the 2015 NASCAR Nationwide Series, as well as a partial schedule in the NASCAR Camping World Truck Series.

“Having the opportunity to run full time in the NASCAR Nationwide Series with Joe Gibbs Racing is like a dream come true,” said Suarez. “Everyone knows how successful they have been in the Nationwide Series and I can’t thank ARRIS enough for supporting me next season. It’s also exciting to be part of this initiative with Carlos because I know his passion for racing and his desire to provide opportunities to others like me.”

Carlos Slim Domit is Chairman of the Board for Grupo Carso and co-founder of Escuderia TELMEX along with Jimmy Morales. As part of Escuderia TELMEX’s international program, he has partnered with Joe Gibbs Racing to aid in their diversity program with the continued focus of developing Mexican and Latin American drivers in NASCAR.

“I am very excited to have Escuderia TELMEX as a partner with Joe Gibbs Racing and ARRIS,” said Carlos Slim Domit. “They are great teams with whom we share strong values with a passion to win. Over the past 12 years we have worked very hard together with NASCAR in the development of a racing series and building a strong ladder system for our drivers. Having the opportunity for Daniel Suarez to demonstrate his talent to compete in the NASCAR Nationwide Series is very rewarding and encouraging to us all.”

Daniel Hemric to Joe Gibbs Racing No. 18 in Xfinity Series