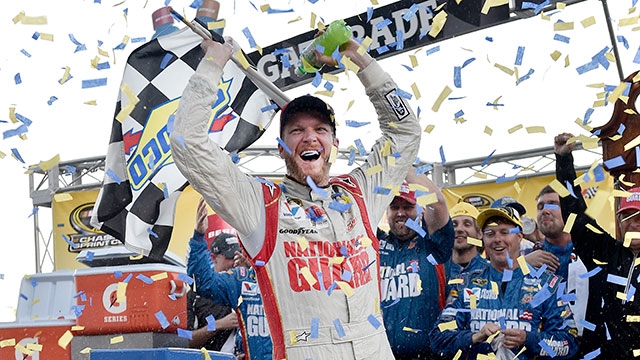 RIDGEWAY, Va. – On an emotional weekend for Hendrick Motorsports, 10 years after a tragedy, the organization honored those that were lost the best way they could – on the track.

At Martinsville Speedway Sunday, Dale Earnhardt Jr. took home his first-ever victory at the track, and right behind him was teammate Jeff Gordon, who now leads the Chase for the NASCAR Sprint Cup standings.

“That means so much to Hendrick Motorsports,” Gordon said. “That’s the best way we can possibly pay tribute to those that we lost here 10 years ago. To have a one-two finish, it’s pretty awesome.”

When the second red flag of the race waved with 11 laps to go, both Earnhardt and Gordon had a decision to make, and both made the choice to head to pit road, giving up their track position in the process. But Earnhardt restarted fifth and Gordon was right behind him in the inside lane in seventh.

The two worked together to weave through the rest of the field until Earnhardt was back in the lead and Gordon was chasing him in second.

Earnhardt held on for the meaningful victory.

“Real emotional win,” Earnhardt said. “This means so much to all of us.”

“I’ve wanted that grandfather clock ever since I was a little boy, and I got it today.”

Both Jimmie Johnson and Kasey Kahne took damage that forced them to the garage, and while Johnson was able to finish the race 32nd, one final incident ended Kahne’s day and he was scored 40th.

Below is a detailed look at how all four drivers fared on Sunday.