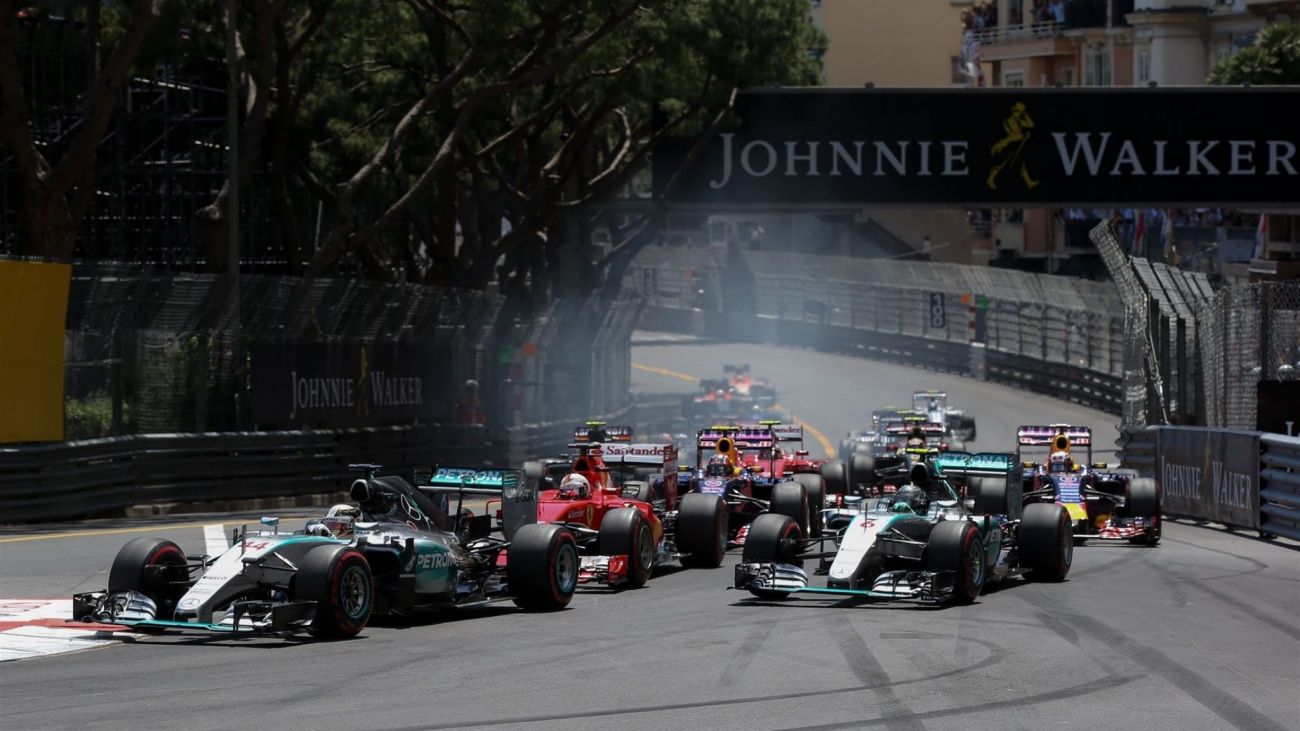 F1 Monaco Grand Prix 2015 Results sheet led by Nico Rosberg after late race safety car. The lead was taken from Hamilton late in the event as he pitted for tires and come out 3rd.

For once, it wasn’t just a beautifully composed drive but also sheer good luck that earned Nico Rosberg victory on the streets of the Principality. Not that he was complaining – he’s now won for three years in succession in Monaco, a feat only three other men in history – Graham Hill, Alain Prost and Ayrton Senna – have achieved. It wasn’t the only milestone the German achieved – even if most had looked unlikely until a late safety car turned the race on its head.

For example, Rosberg also moved level with Stirling Moss and Jackie Stewart in terms of overall wins in Monaco, with three. Only Senna (6), Graham Hill and Michael Schumacher (both 5) and Prost (4) have won more.

The 14 laps Rosberg led on Sunday also moved him to 170 laps led in total in the Principality – and above Mercedes non-executive chairman Niki Lauda, who led 164 during his Formula One racing career. Only seven drivers in history can better Rosberg’s total.

And a final note on the race winner – this was also Rosberg’s fourth podium in a row here, after he finished second in 2012 and then embarked upon his winning run. Lewis Hamilton, Sebastian Vettel and Fernando Alonso have also claimed four podiums here, but of that trio only Alonso has won more than once.

Speaking of Hamilton, Mercedes’ decision to pit him denied him what would have been a 13th consecutive top-two finish. His run of 12 is still the second-longest in history, behind only Michael Schumacher, who managed 15 consecutive top-twos during the 2002 campaign.

Hamilton also became only the second polesitter in the last decade to not go on and claim victory in the Principality. Ironically, the last time it happened he was the beneficiary, coming through from third on the grid to claim victory in a wet race in 2008.

For only the second time in his Grand Prix career, Daniel Ricciardo ended the race with the fastest lap. The only other occasion he has managed it was in the 2014 Abu Dhabi season finale, where he started 20th but fought his way up to fourth at the finish. He is the fourth Australian to have set a fastest lap in Monaco, joining Jack Brabham, Alan Jones and Mark Webber.

This, however, was the first time since 2009 that Red Bull did not have at least one man on the Monte Carlo podium. That 2009 race remains the last to be run without the intervention of the safety car.

Jenson Button claimed the first points for the renewed McLaren-Honda alliance with eighth place. It wasn’t all good news for the team however, as Fernando Alonso recorded his first DNF in the Principality since 2004. Alonso’s retirement also ended a run of 10 consecutive points finishes here.

Seventh place marked Sergio Perez’s first F1 points in Monaco. Last year he was taken out on the first lap; in 2013 he collided with Ferrari’s Kimi Raikkonen; in 2012 he crashed in qualifying and then earned a drive-through penalty; while in 2011 he survived a horrible crash in qualifying and was withdrawn from the race.

Felipe Nasr’s points finish was also a milestone for Sauber, who had not scored a top ten here since Kamui Kobayashi was fifth in 2011.

Carlos Sainz, meanwhile, scored points after finishing tenth despite starting from the pit lane. While Monaco is renowned for being hard to pass, the achievement is not as rare as you might imagine. Looking only at the last decade, Michael Schumacher managed it in 2006, when he started from the pit lane following his now infamous error at Rascasse; Heikki Kovalainen did it for McLaren in 2008; Timo Glock managed it for Toyota in 2009; and Alonso did likewise in 2010 for Ferrari.

At the other end of the scale, there was more Monaco misery for Pastor Maldonado. A two-time winner here in GP2, the Venezuelan secured his best qualifying berth since Abu Dhabi 2012 with eighth, but then had to retire with brake failure. It is his fourth DNF from six starts in Monaco, and in fact he has never seen the chequered flag here in F1 competition. He has also got to the finish just once so far this year, in Bahrain.