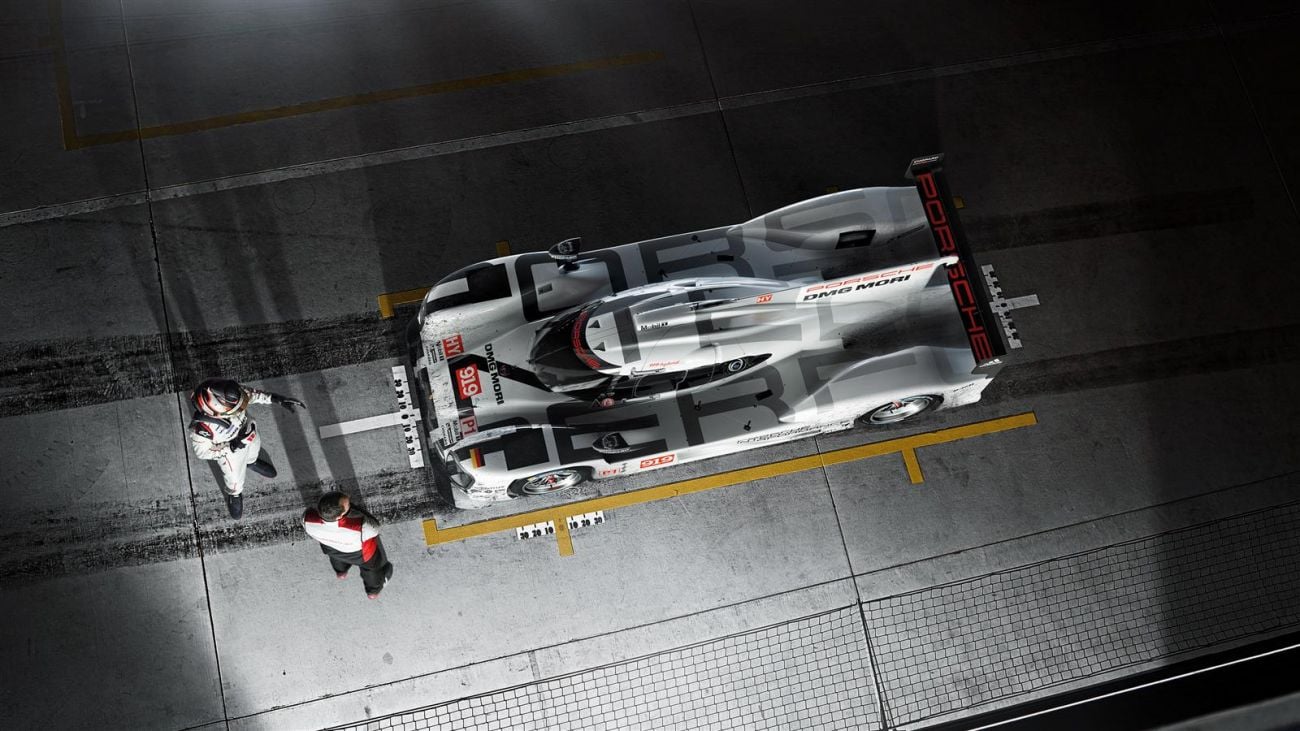 See the 24 Hours of Le Mans results posted below.

No other brand has managed to win the world’s toughest endurance race so many times and is connected that closely to the myth of Le Mans. The previous win was also a one-two – back in 1998 when Allan McNish (GBR), Laurent Aiello (FRA) and Stéphane Ortelli (MC) finished first in their Porsche GT1.

Matthias Müller, CEO Porsche AG said: “This one-two finish in Le Mans 2015 is such a fabulous result we wouldn’t have dreamed of. The entire team has done a great job over the recent three or four years and well deserve this success.”

Wolfgang Hatz, Member of Board for research and Development Porsche AG, said: “A one-two finish in what is only our second year is an amazing reward for the guts of our engineers regarding the 919 Hybrid’s concept, and the relentless efforts of our 230 team members.”

Porsche only returned last year to the top level of endurance racing, attracted by the new efficiency regulations. In the brand’s Research Center in Weissach the most innovative car of the entire grid was developed. The Porsche 919 Hybrid has a trend-setting downsizing turbo engine and two energy recovery systems, which all together create a powertrain delivering around 1,000 HP. It works as a racing laboratory for the highest efficiency of future road going sports cars.

At the 83rd Le Mans 24-Hours all the systems of this highly complex race car were tested to their limits. Because of the very tight competition, especially between the Porsche 919 Hybrids and the Audi prototypes, the race went on in qualifying mode twice round the clock. In qualifying the three Porsches did not only lock out the front of the grid with a one-two-three, but also set a new qualifying record for the 13.629 kilometre long track. The pinnacle was also the performance of the pit crew, who managed 90 pit stops in total and were significantly faster than the competition.

The winning number 19 prototype had started third on the grid, and for a short time at the beginning even dropped down the order to eighth before settling in sixth for a longer period. Of all things, it is the rookie crew that won the monstrous classic. Neither Formula One driver Nico Hülkenberg, who had the joy of being in the car at the most emotional moments of the race, being the start and the finish driver, nor Earl Bamber brought Le Mans experience with them. Nick Tandy, the third driver of the winning trio, had at least done two Le Mans 24-Hours for Porsche in the GT class. By doing super fast laps, staying calm but highly focused, the three of them drove a race with no errors and won it by their own merits.

In the early stages of the men and machine stressing marathon the number 17 Porsche had been leading. However, a one-minute stop-and-go penalty at the end of the first third of the race dropped them back to fourth. Timo Bernhard, Brendon Hartley and Mark Webber kept their heads down and worked hard. With a consistently strong performance they made it up to second place.

The crew of the third Porsche 919 Hybrid had a rather tricky race. Pole-setter Neel Jani lost the lead right after the start to Timo Bernhard. For some time the drivers were unhappy with the braking stability, and two offs from the track didn’t help either. Given that chronology of events, more than fifth place wasn’t within reach this time for the fast trio with the number 18 car.

Fritz Enzinger, Vice President LMP1: “It is an incredible achievement to win Le Mans in only our second attempt since Porsche’s return. I have to thank this brilliant team that has been growing together over the last three and a half years. The Porsche board backed us one hundred per cent from the word go. It will take a few days to realise what we have achieved. I know that a lot of people have virtually lived for this dream to come true and have pursued it with the greatest commitment.”

Andreas Seidl, Team Principal: “It is hard to find words because it is just so difficult to believe we have done that. It is a fantastic reward for the tough work the team did here on the race track and back home in Weissach over the last three and a half years. We knew we were a lot better prepared than last year, but no way could we expect this result. We didn’t benefit from any situations, but were on a winning level in every regard – be it the mechanics in the garage or the engineers doing the strategy. The pit stops were outstanding. The drivers were sensational. Congratulations to the three winning guys.”

Alexander Hitzinger, Technical Director LMP1: “We are really happy now. It is an incredible feeling to win in Le Mans and one that you cannot describe with words. I am especially satisfied for the team, which has put so much passion and hard work into this project. We have achieved such a great development over the last two years and this one-two result is the reward for it.”

Timo Bernhard (car number 17): “Hats off for what our mates in the number 19 car have done – great job, great race. We were doing well, but never made up for the delay that the penalty caused. Regarding my brief excursion into the gravel bed: Everyone has agreed that the slower cars stay on the racing line, but this guy decided to change his line without notice. To avoid contact I had to run wide and ran through the gravel bed. Nothing serious happened though, but this kind of incident can cause a lot of trouble. But that’s racing and the track is there for all of us.”

Brendon Hartley (car number 17): “On the final lap I had tears in my eyes. We have all been working so hard for this result. Stepping onto the podium was a dream come true. It is unbelievable. I’m very proud that two Porsches have won. I feel happy for every single person here.”

Mark Webber (car number 17): “The guys in the number 19 car did a great job. All three of them were exceptional for 24 hours. Especially at night, the number 19 was quick. It is a big day for Porsche. We have had a smooth race, but in the end weren’t quick enough. Brendon and Timo did a great job. We are very proud for Porsche. If we can’t win we obviously want it to be within the team.”

Romain Dumas (car number 18): “That is a great success for Porsche. Sadly, we didn’t have a good race with our car, because we had some problems. But the most important thing is that we proved that Porsche can win. That was the main target. For sure it was not easy for us. But that’s part of the game. This success is a big reward for all the efforts that we have put in since the end of 2012.”

Neel Jani (car number 18): “It wasn’t the race for the crew of number 18 today, but we finished and at least took some championship points with us. For Porsche this one-two success is just amazing.”

Marc Lieb (car number 18): “This is a great day for the entire team and for Porsche. I am very proud to be part of it. Congratulations to the 19 and 17 crews. A one-two for Porsche in Le Mans is really big. We had hoped for more for our car crew, but it wasn’t our day. Nevertheless we will party tonight.”

Earl Bamber (car number 19): “It feels incredible. I have enjoyed every single stint. It is been a long, long day to drive in the evening and then again in the morning. I just had a very short break. But I am not tired at all – I am pumped up on adrenalin now. I thought I would have heard strange noises in the car. But, of course, you fancy every kind of noise if you are on your way to win Le Mans.”

Nico Hülkenberg (car number 19): “I enjoyed every moment, these cars are great fun to drive and then to be on a huge track like this one. The pace was really high, and not what you would expect from endurance racing. Especially at night when the temperatures came down a bit, the car was fantastic to drive. Of course, I didn’t think I would come here and rock ’n’ roll this race, this would be silly because there are so many challenges in that race. However, we did it and we did it together.”

Nick Tandy (car number 19): “This is such a fantastic day. It is hard to get it to sink in that I’m now a Le Mans winner with Porsche.”

• Live communication from the box on Twitter @PorscheRaces.
• To receive press releases and photographic material automatically, to access the archives and to download video material, please register at: https://presse.porsche.de
• There, on the Porsche Press Database, you will also find the new Porsche Motorsport Media Guide.
• Videos can be found on the Porsche channels on Vimeo and YouTube.
• www.newsroom.porsche bundles the latest press releases and background information and is accessible without registration.
• Several live features such as on-board cameras, timing and GPS tracking are available at Porsche.com/LeMans and implemented in the new Porsche Motorsport App which is ready for download for Apple and Android devices in the respective App Stores free of charge.
• Further interesting information about Porsche Motorsport waits at https://Porsche.com/FutureSportscar