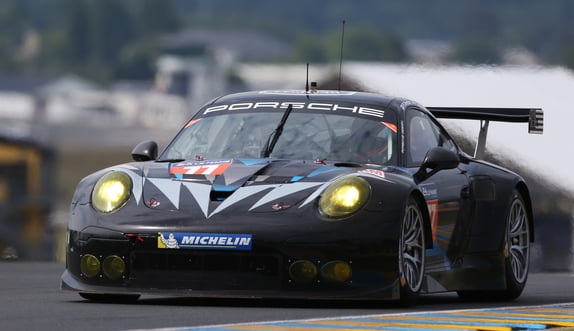 Patrick Dempsey Racing has once again partnered with top German Porsche team Proton Competition for this weekend’s race after a successful initial effort last year. This will be the third time that Dempsey, the popular Hollywood actor who has also been racing sports cars for nearly a decade, has raced in the 24 Hours of Le Mans.

“Everything just leading up to the Le Mans race is like an event in itself, the downtown scrutineering, the autograph session, the ongoing interaction with amazing fans here,” Dempsey said. “It is energizing and all-consuming at the same time, so it is always good to finally drive, finally get started in our Porsche in practice and tonight’s qualifying. It is all just an amazing and incredible experience and so happy to just have the chance to be back here again.”

Foster joined Patrick Dempsey as the anchor drivers in a ninth-place GT2 class finish in their 2009 Le Mans debut.

“In addition to the promotion we have done a lot of background work, a lot of fitment to the car, setups and driver change practice, and we will do some more of that tomorrow,” Foster said. “Finally, we are back in the car, which is good, it’s the only place we will get some peace and quiet!”

Long, a two-time Le Mans class winner in 2004 and 2007, is part of the North American Porsche factory team this year in the IMSA TUDOR United SportsCar Championship. He already has a 2014 victory in the 12 Hours of Sebring, first won at Sebring in 2005, and in total, has a combined eight victories at Le Mans, Sebring, the Rolex 24 At Daytona and Petit Le Mans.

“Leading into practice and the first night of qualifying I think we are in a better position than we were last year because we had better weather and more track time for Patrick and Joe a couple of weeks ago during the pre-test,” Long said. “Now it is focusing in on getting them more comfortable, making sure that our changes from the pre-test to the race fit what we think they are going to do as the track always changes a little bit between the pre-test and the race.”