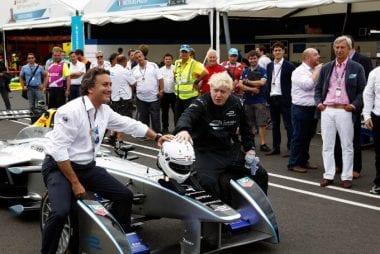 The Mayor of London, Boris Johnson, got behind the wheel of the Formula E car to complete two laps of the Battersea Park track.

Addressing the assembled media after stepping out of the Formula E car, Johnson said: “It certainly is fast but I’ve gone faster! It’s a wonderful venue for London and I congratulate Alejandro [Agag] and everyone at Formula E on what they’ve done. Wandsworth [borough council] have played a blinder getting it here in Battersea Park and let’s make sure we have it every year!”

After arriving on his familiar bicycle, Johnson was given a tour of the track in the Qualcomm safety car before donning his race suit and jumping into the fully-electric Spark-Renault SRT_01E.

It certainly is fast but I’ve gone faster!

“What it showcases is a drive to get low carbon vehicles on the streets and the aim of having an ultra-low emission zone in the heart of the city by 2020,” said Johnson. “It’s not saying much, but we have more electric charging points in London now than we have petrol stations but we’re getting there.”

Speaking about the noise of the Formula E car, Johnson joked: “It was so quiet in the car I could hear a squirrel!”

Sebastien Buemi vs the field in post-race tirade