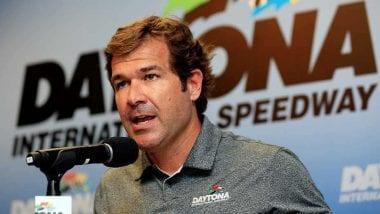 In a press conference Daytona International Speedway President Joie Chitwood III Said “The Fence Worked” regarding the Austin Dillon incident. Austin Dillon was involved in a multi-car crash (the whole field really) late in the Coke Zero 400. The car went airborne and into the catchfence. Below is the official report from NASCAR.

“We assessed 13 individuals in the grandstands,” Chitwood said following a vicious crash on the final lap of the Coke Zero 400 that included Austin Dillon going airborne. “Eight declined any medical attention. We had four treated on property in our first aid and care centers, and we had one transported off property to a local hospital. That individual was reported as stable when they were transported off property.”

A track spokesman announced at 4:55 a.m. ET that the individual had been released.

Names of those treated were not disclosed.

Dillon’s Richard Childress Racing Chevrolet was launched into the catchfence along the frontstretch following contact between several cars, and then was thrown back onto the racing surface. A section of fencing was destroyed and fans were struck by debris.

Dillon’s car, or what was left of it, had barely come to a stop, on its roof, when it was struck by the No. 2 Ford of Brad Keselowski.

Moments later, after rescue personnel had arrived on the scene, Dillon scrambled from his mangled car, and after walking away from the crash, took off his helmet and raised his arms in response to cheers from those in the grandstands.

Chitwood said he was proud of the fact “that the fence worked” and “the additional safety enhancements” performed as anticipated.

“We’ll take this situation, we’ll learn from it, we’ll analyze it, and we’ll round up our engineering team and see if there’s any additional things we can learn to get better the next time,” he said.

It was the second time in three years that a car had impacted the fencing that separates the racing surface from the grandstands on the frontstrech at Daytona. In February of 2013, driverKyle Larson’s car also struck the fencing. More than a dozen fans were transported to area hospitals after being hit by debris.

“Obviously through the last couple years, we’ve learned a lot, whether it’s fencing or the facility itself in terms of enhancements,” Chitwood said. “One of the elements of the project of Daytona Rising was no longer having fans or individuals on Rim Road and closing off the grandstands on the front row, so those were in the new sections, and that was what was in place today, and I think it did a very good job.”