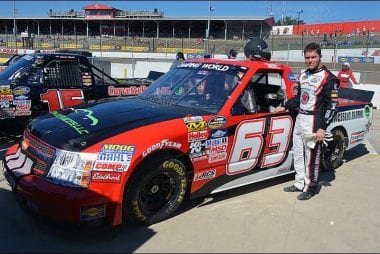 At 18 years old, the driver will sit on the grid in the #63 Ford truck. Mike Mittler confirmed the event with catchfence.com.

“We’re excited about it,” said Mittler. “He did such a great job at Eldora and then ran that Late Model car at Hickory and ran really good there. He’s excited, we’re excited to get him back in the seat and further his career in the next step of asphalt racing.”

This newly scheduled NASCAR event was just a matter of time. Everyone saw Bobby Pierce battling at the front of the NASCAR field at Eldora Speedway in the Mud Summer Classic. Without a deck lid, Pierce drove and battled hard for the win. He came up just short to Christopher Bell in one of the more exciting and most talked about races of the year.

The following was a message posted to the Bobby Pierce Racing website. Now, it appears the ride in October has since become official.

“As many of you know I am planning to run the Mittler Bros. #63 in the NASCAR Camping World Truck Series race at Martinsville Speedway on Halloween. However, we need additional funding in order to make this happen. So, I’m throwing it out to you, the ‘Pierce Posse’ to help.

We are asking for 20 sponsors at $1,000 each to come on board with us! Your name or company will be placed on the rear deck of the truck! That’s right, that famous rear deck you saw at Eldora!

Also, the first 5 people to sponsor will be awarded tickets to the truck race to watch it ‘Live’! If you are interested in helping with the sponsorship or just sponsorship in general, please click donate”

Mike Mittler said as of now no additional NASCAR Camping World Truck Series races have been scheduled for the Oakwood, Illinois native. However, he continued that the idea could possibly come to light.

“Well obviously he’s old enough to run all the events,” added Mittler. “We’d like to move up the ladder as quick as we can. We think he has the talent and he’s interested in going NASCAR racing, so we’re trying to make it happen with him.”

Bobby Pierce will not return to Dunn-Benson Motorsports in 2019

Where does Bobby Pierce want to take his career?