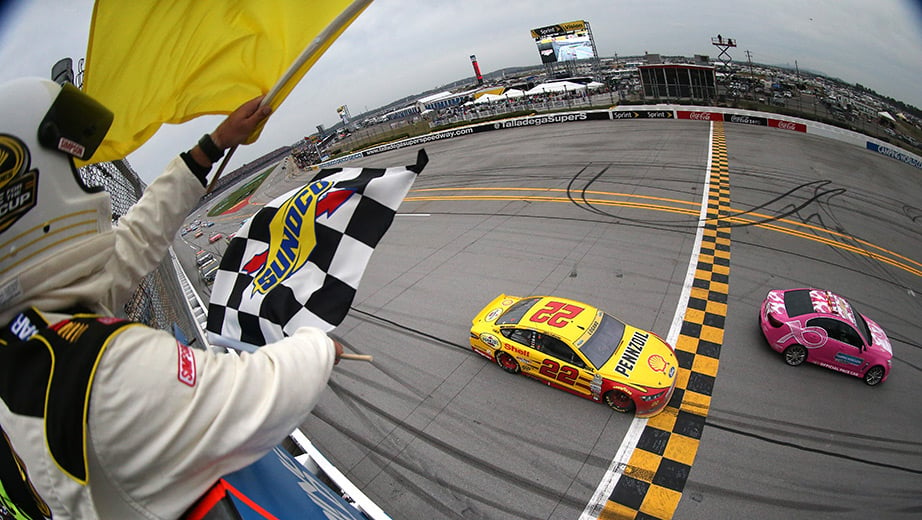 Talladega Superspeedway finish explained by NACSAR. Watch the video of the finish below.

Talladega was a wild ride on Sunday. Here’s what you need to know to sound literate at the water cooler — or to help you unfurl the events if you’re still confused after watching Joey Logano head to Victory Lane after the CampingWorld.com 500.

Before Sunday’s race, NASCAR ruled that only one attempt would be made at a green-white-checkered finish, and that approach came into play as the field wrecked before that one attempt could even be made. The actual green-white-checkered finish was fueled by controversy, as well, when a “Big One” erupted behind leaders Logano and Dale Earnhardt Jr.

Earnhardt Jr. looked like he was in position to get past Logano and win the race — thus gaining a berth in the Eliminator Round of the Chase for the NASCAR Sprint Cup. But just after the green flag dropped for the final restart, Kevin Harvick made contact withTrevor Bayne. Harvick’s 15th-place result in the race put him seventh in the standings and a part of the final eight moving onto the third round of the Chase. Junior’s second-place finish ended his Chase run.

Several drivers were upset after the race. Denny Hamlin’s car was on fire, and he had endured early trouble with a roof hatch. Matt Kenseth’s No. 20 was caught up in the final wreck. And Earnhardt Jr. was disappointed not to advance in the Chase. Frustration fueled questions about whether Harvick manipulated the finishing order to gain a berth in the Chase’s third round. His No. 4 was ailing, and if the race had made it for the full G-W-C, he might have fallen too far back to make the cut.

After NASCAR officials went to video to determine the winner of theCampingWorld.com 500 and sort out the finishing order of the rest of the field, Logano was the winner. Four drivers failed to advance to the Eliminator Round, starting next week at Martinsville: Ryan Newman, Hamlin, Earnhardt Jr. and Kenseth.

It will be an interesting week at the NASCAR R&D center. All four Stewart-Haas cars had problems Saturday during inspection. And NASCAR Vice Chairman Mike Helton said in post-race comments that in his experience, things come out of the woodwork after races like this.