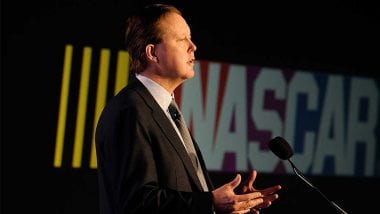 NASCAR instituted a ‘Boys, have at it’ philosophy in 2010, but France said on the “Morning Drive” show that there are always limits.

“This is the style of racing we have. There’s contact in this style. Thanks to the fenders and the design of the cars … we can have that,” France said of aggressive driving and passionate competition that produces on-track contact. “There’s always limits to that. And when those limits are exceeded, we deal with that. … Drivers know where the limits are. They may not say it, but they understand it.”

Matt Kenseth appeared to intentionally wreck race leader Logano on Lap 454 of theGoody’s Headache Relief Shot 500. Logano had won three consecutive races, including the Hollywood Casino 400 at Kansas, in which Logano spun race-leader Kenseth with fewer than five laps to go, effectively denying Kenseth the win and a chance to advance in the Chase for the Sprint Cup.

Patrick chased down David Gilliland’s Ford and initiated contact after he had sent her No. 10 Stewart-Haas Racing Chevrolet into the wall earlier Sunday.

Asked if suspension or points reductions are on the table as penalties for Kenseth and the No. 20 Joe Gibbs Racing team, France said, “Sure. They’re all on the table. We’ll make that decision later today.”

A decision on the Patrick vs. Gilliland contact will be made Tuesday, as well.

“No question about that,” France said when asked if the sanctioning body is also looking at the No. 10 vs. No. 38 incident.

“What we want to prevent happening is drivers or anyone participating in NASCAR to take events into their own hands and control outcomes of races,” France said. “That’s a very serious thing to us, and we’ll be dealing with that.”