Kurt Busch house gets shown Cribs style via Monster Energy. Take a walk around the house and garage of NASCAR driver Kurt Busch below.

Kurt Busch races 36+ races a year and only has two off weekends in a grueling NASCAR season with Stewart-Haas Racing. The racing season is the longest in professional sports.

Check out Kurt and fiancé Ashley van Metre’s lakeside retreat and get a glimpse into the crib and whips of one of NASCAR’s biggest stars.

The Kurt Busch lake house is located in North Carolina as are most of the NASCAR racing teams and drivers. The video opens displaying the infinity pool overlooking the lake.

The trophy room is jam packed pull of NASCAR trophies. Missing from the shot is his NASCAR Sprint Cup Series driver championship trophy. NASCAR apparently made a call to put it on display elsewhere for the time being. In interesting addition is an all gold replica of his championship winning car presented by Goodyear.

In his office there’s 5 identical trophies all in line in front of the window. Those represent all 5 Bristol Motor Speedway wins by Kurt Busch.

The pool table is interesting. Kurt Busch explained it was the first piece of furniture he bought with a professional racing check. Not a couch, not a bed instead a pool table. 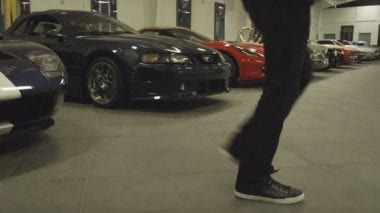 Separate from the house is the Kurt Busch car collection. A warehouse of cars features all the American Muscle machines of your dreams.

On the other side of the garage are a full line of racecars from his racing career. 2003 Iroc car, 2005 NASCAR Nationwide car, 1999 Monte Carlo from the Southwest Tour as well as some ‘junkyard racers’.