Who would have won the 2015 NASCAR Cup Series Point Standings without the chase format? We’re taking a look at the 2015 classic NASCAR point standings.

These classic NASCAR point standings listed below just take out the chase and elimination rounds from the picture. They do use the modern points awarding system, meaning basically 1pt per position.

Many dislike the chase, others love it. As a hypothetical, how would the NASCAR Championship standing have looked without the chase? 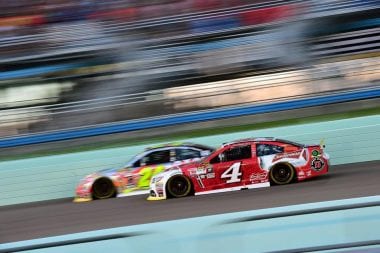 Kevin Harvick would have been your 2015 NASCAR Sprint Cup Series Champion without the knockout chase format.

Fan Favorite Dale Earnhardt Jr would have been 4th and Martin Truex Jr would be 5th in the standings. See the partial list of nascar drivers in the non-chase point standings below.

Kyle Busch was of course your actual winner of the 2015 NASCAR Sprint Cup Series Championship. However, without the knockout style chase he would not have won or come anywhere close due to his injury at Daytona.

After missing the first 1/2 of the racing season it would have been impossible for Kyle Busch to win the championship without the new chase grid format. However, he would have climbed back to a top 2o in the standings, following the classic NASCAR points system.

In fact most of the below Classic Non-Chase 2015 NASCAR Point Standings look very different from the official standings this season. It’s interesting to look at but these standings still mean nothing in the record books.