This weekend, Ricky Carmichael and Chad Reed are both set to come out of retirement to race against each other. The two supercross legends will battle in front of a packed crowd. The event is the AUS-X Open round of the Australian Supercross Championship at Sydney’s Allphones Arena on 28-29 November. 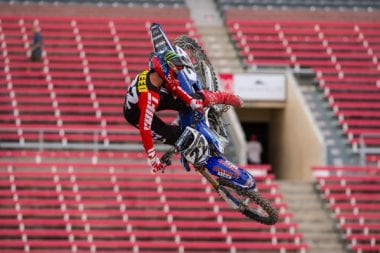 North Carolina native Webb will jet to Australia this week to the delight of his local fan base in Australia. The 20-year-old supercross racer is taking on Chad Reed and the domestic best during the two-event schedule.

“I’m pumped to be heading to Sydney this weekend to race against Chad and the rest of the Aussie riders, in what looks like an awesome stadium track set up,” commented Webb. “I’ve never travelled as far as Australia before, so I’m looking forward to checking out the sights in Sydney, but more so putting on a huge show for the crowd and hopefully walking away with the winner’s trophy. It’s going to be hot in Sydney and the Aussie riders race hard, so expect some intense battles and bar-banging this weekend!”

It’s also been announced that the motocross’ GOAT’ Ricky Carmichael will make a special appearance. He’s been taunting Chad Reed via twitter. He told Chad via twitter to get a good look at the back of his new jersey because he’ll be seeing a lot of it this weekend. Rick Carmichael will line up on an RM-Z450 head-to-head against former arch-nemesis and Australia native Chad Reed. The due race was a unique showdown added to the event’s program.

Meanwhile, Chad Reed has been posting practice video all week.

“I’m pumped to be heading to Sydney to ride at the AUS-X Open in front of a packed out Aussie crowd, as well as alongside Australia’s greatest rider in Chad Reed,” stated Carmichael. “The track looks insane and the fans are going to be in for an awesome show. It will be really cool to be apart of it across both days. I’ll be trying to meet as many fans as possible on each night so make sure you head down and say g’day!”