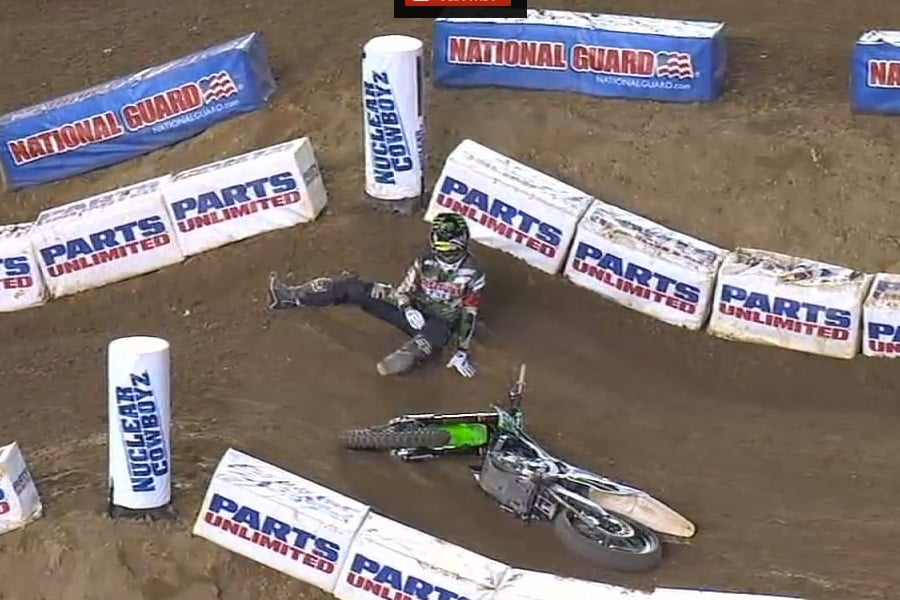 You can watch the video of the Chad Reed crash below this post.

The Chad Reed crash sent the Kawasaki rider from a weekly high to a weekly low in the blink of an eye. Last week, Chad Reed rode to victory at Angel Stadium in Anaheim, CA. However, over the weekend in San Diego, CA at Qualcomm Stadium things went South. While fighting hard for a top five spot, the two two motorsports driver tangled in wheel to wheel supercross racing action.

Just a racing incident, Chad Reed and Ken Roczen both crossed the track slightly and met in the middle of the whoops. Reed then flew off his Kawasaki and went shoulder first into the dirt at full speed. His shoulder took the full impact as he was brought to an instant halt against the backside of the whoops.

It was reported by other drivers that Chad Reed was spitting up blood following the race. A visit to the hospital was unavoidable and that’s where he spent the rest of his night. Chad Reed twitted, “I’m not confident in this hospital so I’ll let y’all know when I know more..” which was shortly followed by “In outta here!! Onto the next hospital..”

Following the next hospital stop he broke the news to instagram. Here’s what he had to say to his social media followers.

“So not the news I wanted 3 broken bones 1) scapula 2) collarbone 3) T1 Explains the pain I guess.. Sometimes things don’t make sense it’s that love hate relationship you have with racing But every Saturday night they drop the gate. In 6 days I plan to be there! Thanks for all the preyers hope to make y’all proud 22 supporters.”

This injury couldn’t come at a worse time. Even following the Chad Reed crash he’s currently standing strong while 3rd in 450SX Supercross point standings. Before the crash he was sitting just two points short of the leader Ryan Villopoto. However, the season points are just a glimpse into what’s really going on the the supercross rider.

Australian rider Chad Reed is in the middle of a major comeback/beatdown tour. He’s labeled as ‘the old guy’ within the series. While accepted, in 2014 you wouldn’t be able to tell until he removed his helmet. He’s been riding like he has something to prove and thus far he’s been proving things.

The stadium all but erupted with cheers when he led flag to flag in his homestate of California. Speedy Reedy took control of that race and the win placed him tied for the most San Diego wins along with four other riders.

Next week as the series heads to AT&T Stadium in Arlington, TX. Chad Reed has an uphill battle of riding through jumps and violent whoops with 3 broken bones. A painful task for anyone at any age.

The crowd will surly provide an extra bit of encouragement. I sit on the side of the fans, who like myself are thoroughly entertained watching the old guy Aussie beat down on the young guys.

Scott Speed breaks back in crash