2016 Icebowl Results led by Donald Brannon and William Thomas. The 2016 Icebowl Shootout has concluded at the Talladega Short Track.

Brannon drove the Elora Gin Company Special powered by a $7,195 all-aluminum Chevrolet Performance CT525 Racing Engine to victory in the caution-free Super Late Model 50 lap race and the $6,000 top prize.  Brannon’s win made it four straight Icebowl Super Late Model wins.  Ross Martin of Talladega, AL was the 2013 winner, Thomas took the win in 2014, and Tim Roszell of Anniston, AL was the 2015 winner.

Burchfield went wire-to-wire in the Burchfield Body Shop Chevrolet, with a unique station body, complete with a luggage rack, based on a Chevrolet Monte Carlo, and dubbed the “Grocery Getter” to win the 25-lap NeSmith Performance Parts Street Stock Division main event.  Burchfield can buy a lot of groceries with his $2,500 top prize.  The Grocery Getter is powered by a $3,495 Chevrolet Performance 602 Racing Engine.

The 25th Annual Icebowl lived up to its billing, as the temperature was 31 degrees at feature race time, with a feels like temperature of 27 degrees.  Despite the chill in the air, a good crowd was on hand to see Sunday’s races in six different divisions. 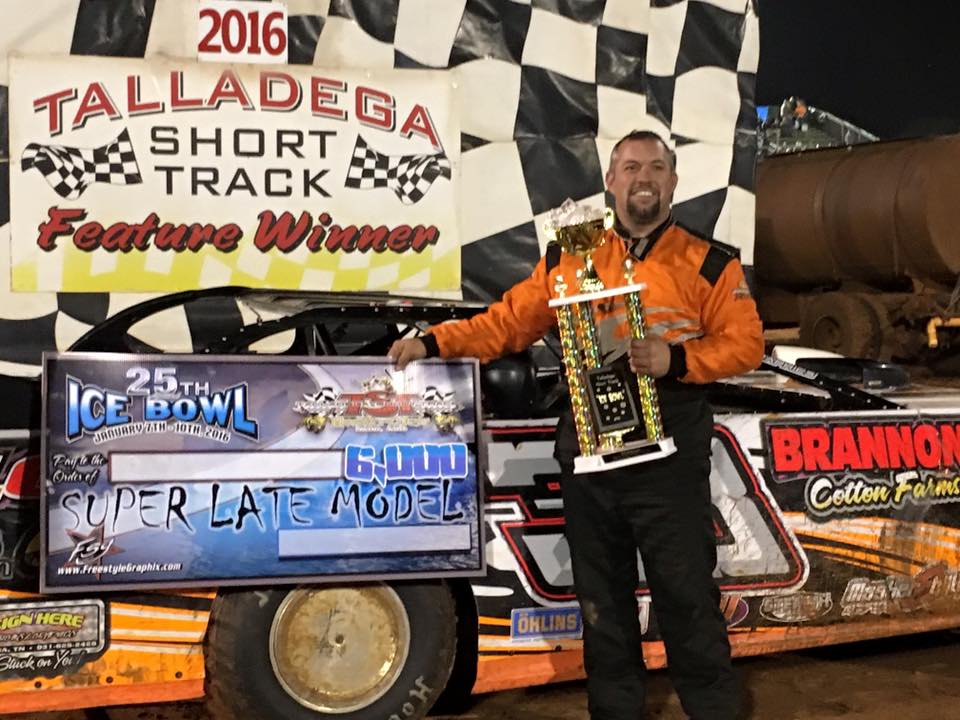 Brannon started on the pole position for the Super Late Model feature, with the defending race champion Roszell starting to his right on the front row, Brannon and Roszell waged a side-by-side war for the point in the opening laps with Roszell leading the first two laps, Brannon leading lap three, Roszell led the fourth lap and Brannon led lap five.

Roszell took the lead on lap six, and held it for five laps, until Brannon drove under Roszell on lap 11 to take the lead he would never relinquish.  McIntosh tried to move up to challenge in the closing laps of the race, but was unable to mount a challenge.

The track was multi-groove for the NeSmith Late Models, as Elliott found the bottom groove to his liking early in the race, as the polesitter paced the field for the first 14 tours.  Cook dusted off the top shelf of Talladega Short Track, and sailed around the outside of Elliott to take the lead on lap 15.  Thomas found a groove he liked in the middle of the track.

Thomas methodically worked his way to the front of the pack, and took the lead from Cook on lap 32.  Once he established himself in the lead, Thomas never looked back and led the rest of the way unchallenged.

Burchfield took the lead at the start of the race from the pole position, and immediately began to put distance between himself and teammates Dunn and McRee.  Burchfield led all 25 laps to earn the victory.