Tony Stewart was schedule to race at the Talladega Short Track last night. The track is a 1/3 mile high banked (18°) red clay oval. It sits behind the Talladega Superspeedway 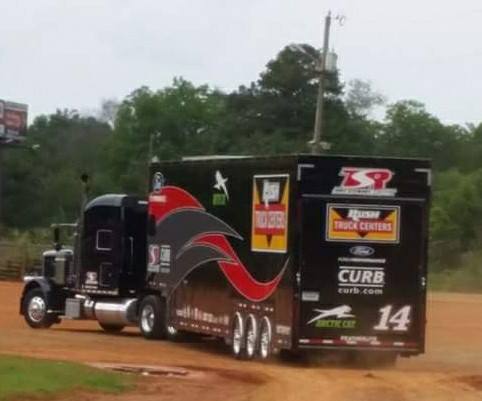 Tony Stewart Racing drove in from Indiana and pulled into the pits at the Talladega Short Track in Talladega, Alabama.

The hauler arrived at the dirt track ready to go racing. That excited fans, as they thought they’d see Tony Stewart in his return to dirt track racing.

However, that early excitement was soon deflated as Tony Stewart never made it. He tried, twice. Unfortunately, mechanical issues on his plane forced the former NASCAR Champion to stay on the ground.

The hauler of Tony Stewart Racing eventually pulled out of the pits. Fans were confused but they didn’t know the whole story. Tony tried to join the program.

The Talladega Short Track issued a statement just ahead of the event:

The track posted the following statement at around 3 PM. Several hours ahead of the event, “Due to unforeseen circumstances Tony Stewart will be not able to reach Talladega Short Track tonite to race.”

“His sprint car team traveled here from Indiana and has been waiting in the pit area since 3:30 pm.”

The track explains to the situation to the sprint car racing fans. Detailing Tony Stewart’s lack of appearance at the Talladega Short Track, “His plane has had mechanical issues and they thought it was fixed twice, but, it didn’t happen.”

The track and series issued an apology, “The USCS and Talladega Short Track apologize for thinking Tony was already here to race in his hauler. But, all we can do at this point is be thankful that no one’s safety was compromised.”

The racing program continued on, “There are still a lot of great sprint cars drivers here and the show will go on. Gates open at 4:30 pm and Racing at 7:30 pm.”

Carl Edwards says he misses NASCAR racing; it’s ‘getting harder’ to remain away from the track