ST. LOUIS, Mo. — The Edward Jones Dome will play host to the biggest indoor stock car event in 34 years with December’s Gateway Dirt Nationals, a mega-event for Dirt Late Models and Open-Wheel Modifieds on a temporary oval within the 67,000-seat stadium on the Mississippi River.

The temporary racetrack — a fifth-mile, semi-banked oval on the floor of the massive facility that has hosted a variety of sporting and motorsports events — will host scores of dirt-track racers at the unique event scheduled for Dec. 15-17, 2016, that’s certain to spark the interest of auto racing fans throughout the Midwest and beyond.

“The central location in the heart of some of the healthiest dirt racing in America makes St. Louis perfect,” said Cody Sommer, part of the Gateway Dirt Nationals promotional team. “Not to mention the dome and the America’s Center provide more than adequate space to do such an event. There really is not another place like this.”

The biggest indoor stock car event since a 1982 National Dirt Racing Association race at the Silverdome in Pontiac, Mich., will feature the largest indoor oval track in America with 800-horsepower stock cars roaring around the temporary dirt track.

The winter event will include three days of racing action at the Edward Jones Dome, part of a 1.7 million square foot convention center and sports complex. Gateway Dirt Nationals practice and qualifying is scheduled for Thursday, Dec. 15, followed by a Friday, Dec. 16, racing program made up of $5,000-to-win events for Super Late Models and Open-Wheel Modifieds. 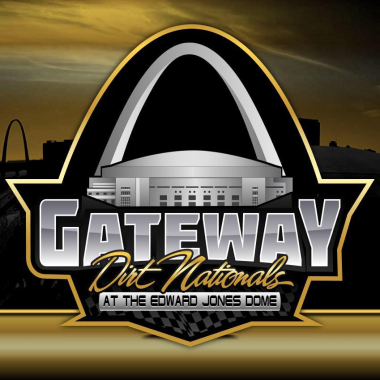 Several announcements regarding the event are expected in the coming months at www.GatewayDirt.com. Follow details on social media via Twitter @GatewayDirt or https://www.facebook.com/Gateway-Dirt-Nationals-585480674962111/?fref=ts.