KNOXVILLE, Iowa (August 13, 2016) – In a race that will go down as one of the best ever run at the Knoxville Raceway, the 56th annual 5-hour ENERGY Knoxville Nationals presented by Casey’s General Stores found a new champion as “The Ragin’ Cajun” Jason Johnson brought a near capacity crowd to their feet with a hair raising battle with Donny Schatz to claim Sprint Car racing’s biggest prize. View the full 2016 Knoxville Nationals results sheet below.

“Parked it. B.C.!” screamed the Louisiana native as he immediately dedicated his win to Bryan Clauson.

Asked about his nearly race long battle with the nine-time Knoxville Nationals Champion; Johnson stated, “I wasn’t giving up. I mean, this is the biggest race of the year, and the biggest race of my career. It was a golden opportunity, and I needed to make the most of it and I know he wasn’t happy with me for crowding him but $!&% I wanted to win.” 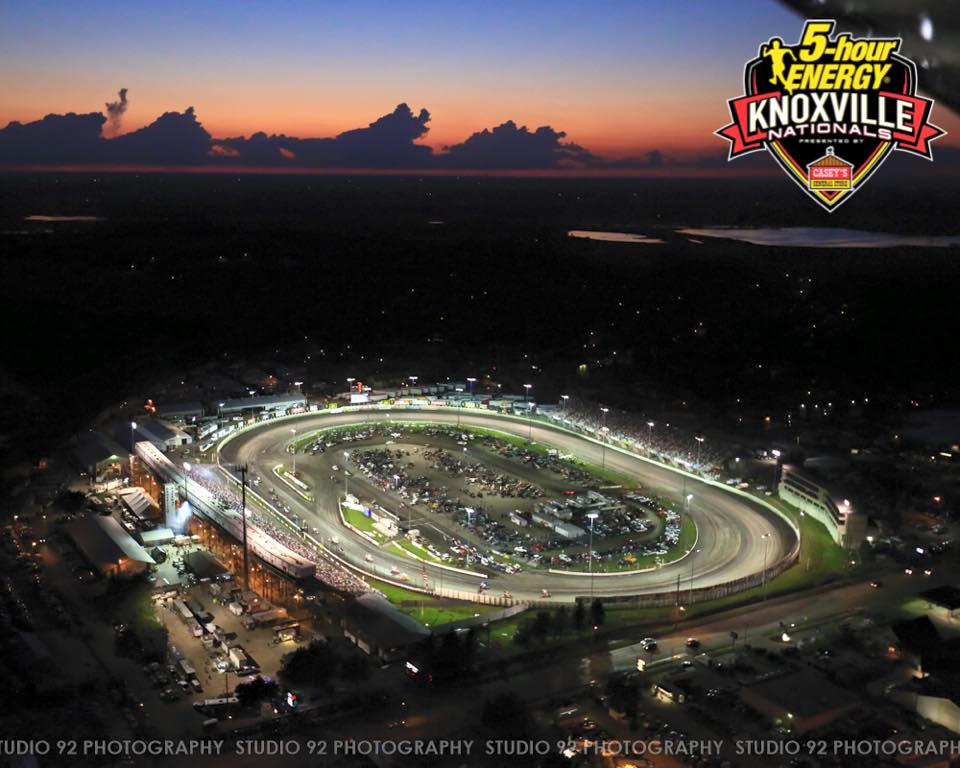 Bringing up a comment by Jason under the break of needing the second half to go with as few cautions as possible, Johnson explained, “It really made a difference. My guys gave me a great racecar. I was worried about blistering my tires, but I’ve got to thank my fellow competitor, Shane Stewart. I’ve spent a lot of time talking with him about how to race this track, and I was just trying to stay patient and run him [Donny Schatz] down and when I got by him, I stayed patient for a few laps but I just couldn’t stay patient anymore. It was time to go.”

While Jason occupied the outside of the front row, it was Daryn Pittman who took off with the race lead with Jason Johnson in tow. Working to third on the second round, Donny Schatz worked smoothly around the bottom of the Knoxville Raceway with Jason Johnson to his front.

Coming up on the tenth lap, the leaders began closing in on the back of the field. Giving Johnson the advantage to close the gap, the MVT No. 41 worked the cushion as Pittman rolled the bottom side. Completing the ninth circuit, Pittman came very close to a slower car at the bottom of turn four, just as Jason Johnson shot off the fourth turn. Closing more on the tenth round, Johnson made a break for the lead on Lap 11.

Off the fourth turn, the cushion was the line for Jason to grab the point, but it would be short lived as Pittman drove back around the Priority Aviation No. 41 to lead Lap 12. With the Bad Boy Buggies No. 15 taking over the runner-up spot in the mix, Schatz brought a full head of steam behind him to grab the top spot on the Lap 13.

Putting the Great Clips No. 9 to third, Johnson returned to the cushion with Schatz in the crosshairs.

The caution flew on lap 16 for Craig Dollansky, who suffered a failed engine. Johnson rolled the center of the first turn to no avail as Kerry Madsen made his presence known with a high side pass off the second turn to grab third from Pittman in the Keneric Racing No. 1AUS. Struggling to get up to speed, Pittman ended up three wide to hold onto the fourth spot. Finally fighting off the challenge, Pittman went to work to regain lost ground.

Still keeping pace with Schatz for the lead, Johnson began searching around the track, vacating the cushion as the mandatory caution flew on Lap 26.

With adjustments made, the field went back to green with Johnson on a mission…keeping pace with Schatz as Kerry Madsen worked to get around the pair. Going to the cushion, Johnson built his momentum, taking the race lead off the fourth turn of the 27th lap.

Side-by-side for several laps, Donny worked the bottom side as Johnson continued on the cushion. Pulling away slowly from the No. 15, Johnson found traffic on Lap 33. Nearly climbing the wall off the fourth turn on Lap 34, the bobble allowed Schatz to bring the No. 41 back into his grasp.

Under a second behind, Schatz had his hands full as Kerry Madsen powered to by the No. 15 on Lap 38.

Into the final ten rounds, the leaders found themselves in heavy traffic as the race for second heated up again with Schatz retaking the spot on Lap 41. Carrying a huge run into the second spot, the race of the lead was on. On trip No. 44 around Knoxville, the slide jobs came, as Schatz delivered an onslaught of haymaker moves with Johnson returning in kind.

With under five laps to go, the scream of the crowd roared louder than the cars as Johnson ran the right rear of his No. 41 on the ragged edge with traffic about to come into play. With three laps to go, off the fourth turn, Johnson nearly tagged the wall. The bobble was just what Donny needed as the No. 15 was ferocious around the bottom of the Knoxville Raceway.

To the white flag, the stage was set as Johnson entered the final two turns. Powering the bottom side, it was all or nothing as Donny gave it one last run, but it was not to be as Jason Johnson worked to the checkered flag a mere .168 seconds over the nine-time champion. The win is also Johnson’s third at the Knoxville Raceway in 410cid competition.

Donny’s runner-up finish is the 12th time in as many years that Schatz has been on the podium at the Knoxville Nationals. “We did everything we could,” he said. “Jason [Johnson] did a great job. I didn’t think you could run that hard a pace for 50 laps, but he did, and once he got out there, I tried everything to catch him and just couldn’t do it,” commented Schatz from the second podium step.

Running in the top-five just over half the race, Oklahoma’s Shane Stewart worked to the final podium step in the Larson/Marks Racing No. 2s, despite suffering an engine miscue in the latter part of the race. “I actually have to say thanks to Justin (Marks) and Kyle (Larson),” he said. “Justin had a tremendous day today, and we were hoping to carry that through tonight, but my car was really, really, good. We actually lost a cylinder about halfway through the end of the last segment, and just had to try to hang on, but congratulations to Jason, Bobbi, and his whole clan. It’s a huge race to win, and a hard one to win, and he did a great job.”

After leading the opening rounds, Daryn Pittman ended up fourth. Having to race his way in through the B-Feature, Kyle Larson tore a path through the field from 21st to fifth in the Finley Farms Special No. 57.

Jamie Veal crossed as the highest finishing Australian with a sixth place run with Chad Kemenah seventh. Greg Hodnett was eighth with Ian Madsen ninth. The top ten rounded out with David Gravel.

Starting off with the E-Feature, Jon Agan led wire to wire, with the D-Feature won by Austin McCarl. In the C-Feature, the top spot went to Davey Heskin. In the non-stop, 22 lap B-Feature, it was Kyle Larson who grabbed the win.

Best appearing car of this year’s 5-hour ENERGY Knoxville Nationals presented by Casey’s General Stores was the Blazin’ Racing No. 82 driven by Dusty Zomer. Best appearing crew was won by the team of the Josh Baughman Racing No. 17. Each team received $500.

Being interviewed prior to the race, Greg McCormick with the Blazin’ Racing Team, let everyone know that the money was to be donated to the family of Bryan Clauson. The night’s 50/50 winner donated their winnings, worth $20,560, to the Clauson family as well.

Rookie of the Year honors went to Matt Juhl in the Octane Ink No. 09. Juhl advanced from the C-Feature to finish 16th in the ‘B’. The Jesse Hockett Mr. Sprint Car Award presented by Cox Fabrication was awarded to Jamie Veal, who is the first Australian to earn the title since it began in 2002. The 2016 Mechanic of the race was earned by JJR Crew Chief, Phil Dietz.

by Bryan Hulbert and Bill Wright 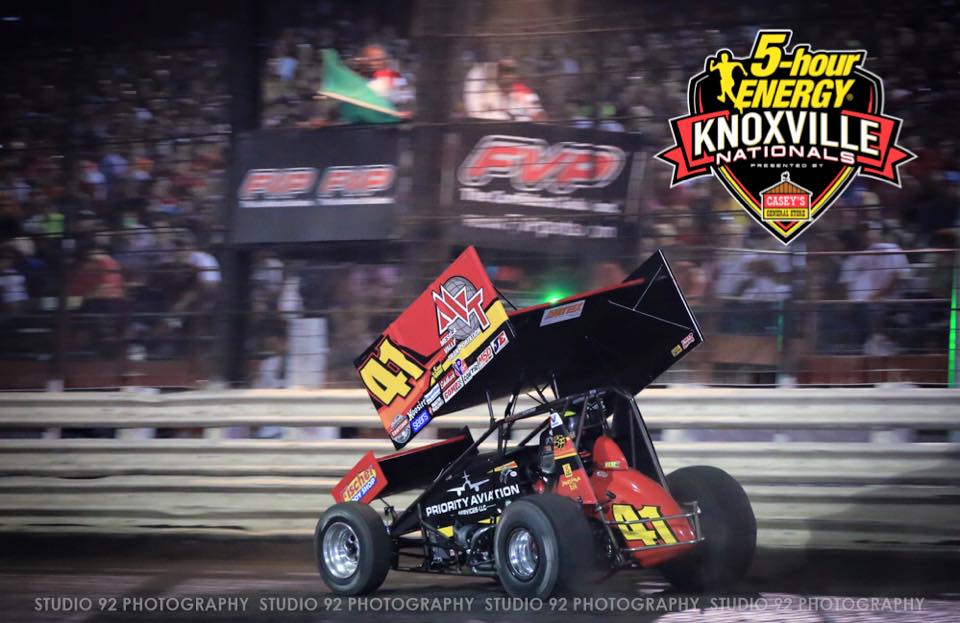