KNOXVILLE, IOWA (Nov. 19, 2016) — Following a successful 2016 entry into grassroots racing, 5-hour ENERGY® has announced they will return to sprint car racing’s most prestigious race as the title sponsor of the 2017 Knoxville Nationals at Knoxville (Iowa) Raceway. 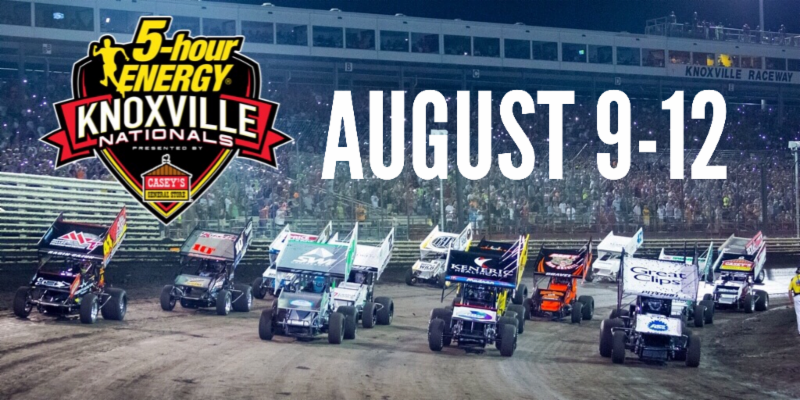 The 57th running of the 5-hour ENERGY Knoxville Nationals presented by Casey’s General Stores will be held August 9-12, 2017. The four-day event hosts more than 100 of sprint car racing’s greatest drivers from the United States, Canada, Australia and New Zealand. More than 20,000 fans converge upon the small town of Knoxville, Iowa, just 40 minutes southeast of Des Moines, for the annual event.

5-hour ENERGY®, distributed by Michigan-based Living Essentials, LLC, has been a mainstay in NASCAR for the past several years as a sponsor of teams, drivers, and tracks, supporting the various programs through national advertising and retail campaigns. In 2016, 5-hour ENERGY added dirt track racing, specifically the prestigious Knoxville Nationals, to their marketing efforts.

“Sprint car fans are our customers and we were so proud to be associated with the greatest sprint car event of the year in 2016,” said Rise’ Meguiar, Vice President of Sales for Living Essentials. “The racing is amazing, the fans are extremely loyal and the experience is memorable. Another key component for us is the partnership we have forged with Casey’s General Stores. We did a lot of good things together our first year and I am looking forward to being even more creative in 2017.”

Casey’s General Stores, a long-standing partner with Knoxville Raceway, will continue as the presenting sponsor of the 5-hour ENERGY® Knoxville Nationals, creating a natural retail relationship.

“We truly value the race fans loyalty to brands that enjoy the sport as much as we do,” said Mike Richardson, Vice President of Marketing for Casey’s General Stores.  “We look forward to another exciting Knoxville Nationals in 2017.”

The 2016 5-hour ENERGY Knoxville Nationals presented by Casey’s General Stores saw one of the most thrilling battles between nine-time winner Donny Schatz and Jason Johnson. Johnson went on to win the event – the biggest win of his career – and stop Schatz’s attempt at a 10th victory in just 11 years. “King of the Outlaws” Steve Kinser remains the winningest Knoxville Nationals driver with 12 victories.

The 2017 Knoxville Nationals preliminary night sponsors will be announced soon, as well as sponsors of major event entitlements for the 360 Nationals, Late Model Nationals and Capitani Classic.

Tickets for the four-day 5-hour ENERGY® Knoxville Nationals presented by Casey’s General Stores will be available to the public starting on Thursday, December 1. Tickets can be ordered online or by calling the ticket office at 641-842-5431.

Drivers cheat the Roval; Two hour delay for changes to the track