Fresh on the heels of the sales launch of the 2017 Civic Hatchback, the next-generation 2017 Honda Civic Type R had its global debut in prototype form today at the 2016 Paris auto show. The radical new Civic Type R, with its sporty and sleek hatchback design and track-ready performance, will make its North American debut at the 2016 SEMA Show in Las Vegas, November 1-4, 2016, marking the arrival of the first-ever Honda-badged Type R in the U.S.

The Civic Type R Prototype offers insight into the styling of the next-generation Civic Type R, which will be officially unveiled in 2017, joining the 10th Generation Civic Sedan and Civic Coupe and newly released Civic Hatchback, with the Civic Si variants also launching next year.

“We promised the most ambitious, sportiest Civic lineup ever and we’re delivering on that promise with each new Civic,” said Jeff Conrad, senior vice president and general manager of the Honda Division of American Honda Motor Co., Inc. “For the first time ever in America, Honda fans and enthusiasts will have access to the ultimate in Civic performance in the form of the new Type R.” 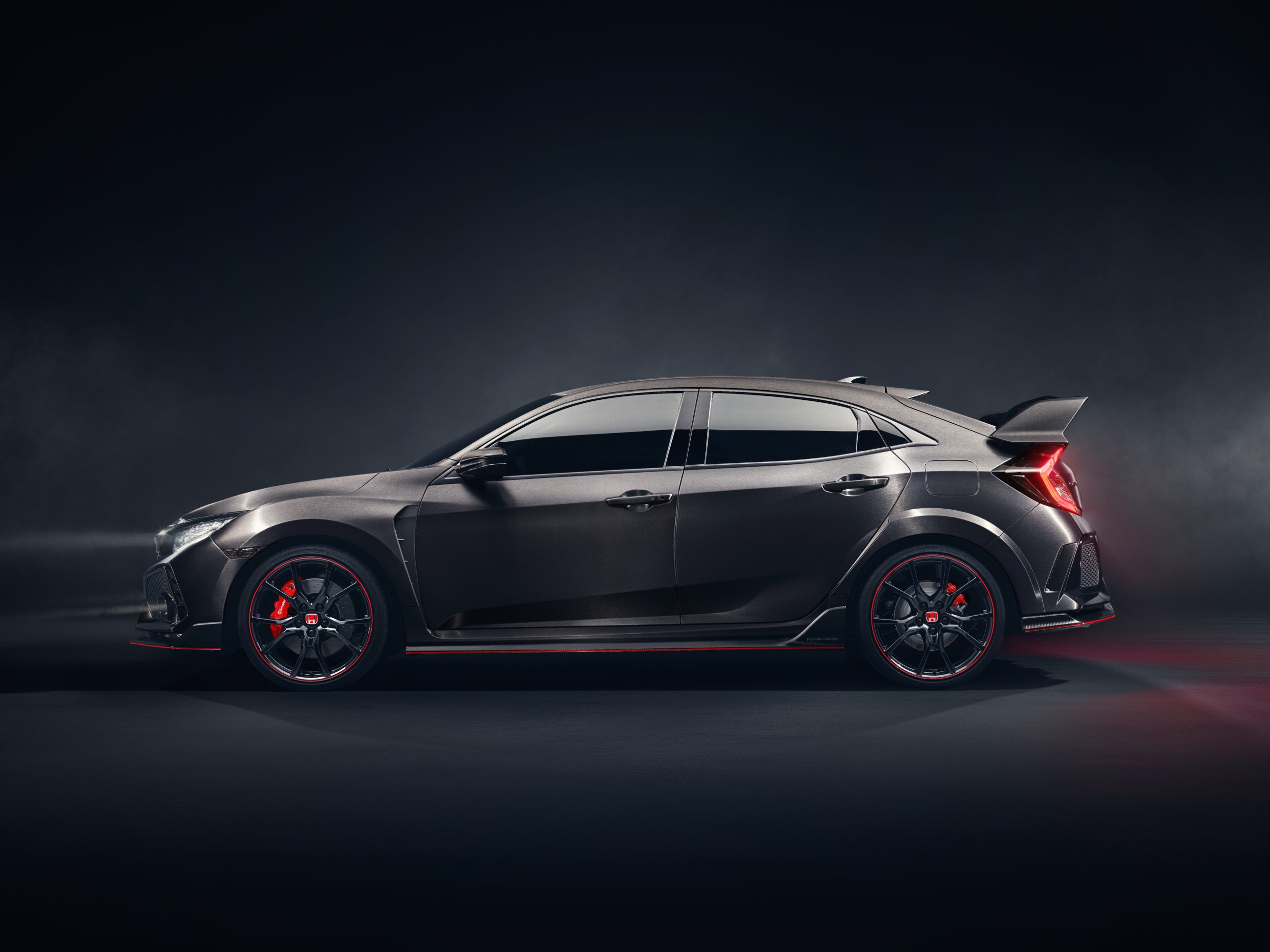 Based on the low and wide proportion of the new Civic Hatchback, the Civic Type R Prototype is enhanced by muscular body styling and modifications to aid aerodynamic performance. The exterior is wrapped in a highly reflective, finely-grained brushed aluminum-effect finish, which is unique to the prototype car. At the front, the aggressive fascia is accentuated with a winged carbon fiber splitter and sporty red accent line. Additional slatted ducts add width to the fascia, and diamond-mesh inserts fill the sculpted air intakes.

Honda’s iconic red “H” badge, which adorns all Type R models, sits prominently on the front grille at the nose of the car. There is a new intake on the hood, with an air scoop sited centrally in a trapezoidal recess. Smoked lenses for the LED headlights, indicators and side indicator repeater lights reflect the Type R Prototype’s more aggressive character.

Carbon fiber side skirts run the length of the side sills, between 20-inch piano black alloy wheels with red accents and 245-section high-performance tires. A beefy carbon fiber diffuser runs below the wider rear fascia, which frames three fully-functional tailpipes flanked by a pair of directional strakes. The smaller diameter central tailpipe is highlighted in bright metallic red. Model-exclusive vortex generators at the rear edges of the roof point backward toward a visually striking rear wing. 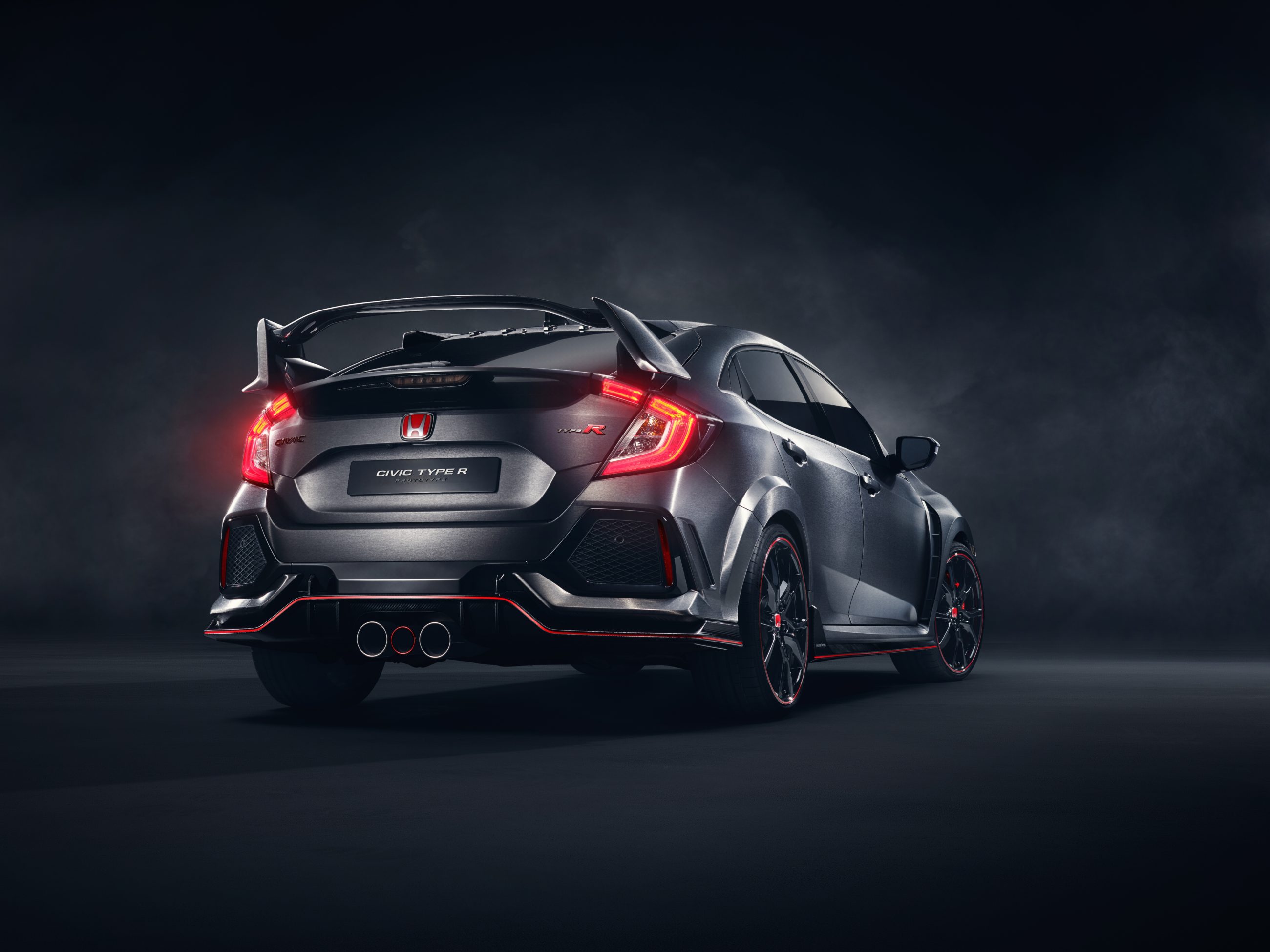 The next generation Civic Type R was developed by the joint efforts of Honda R&D teams in Europe and Japan and will be officially unveiled in production form next year. The 2017 Civic Type R will be produced exclusively at the Honda of the UK Manufacturing (HUM) plant in Swindon, the global manufacturing hub for the five-door hatchback.

About Honda
Honda offers a full line of reliable, fuel-efficient and fun-to-drive vehicles with advanced safety technologies through approximately 1,000 independent U.S. Honda dealers. The Honda lineup includes the Fit, Civic and Accord passenger cars, along with the HR-V, CR-V and Pilot sport/utility vehicles, and the Odyssey minivan.  The next generation Ridgeline pickup truck is set to debut later this year.  Honda has been producing automobiles in America for more than 30 years and currently operates 16 major manufacturing facilities in North America. In 2015, more than 99 percent of all Honda vehicles sold in the U.S. were made in North America, using domestic and globally sourced parts.

SRX Series explained by Ray Evernham; He details the cars, adjustments and type of drivers