Lewis Hamilton was well in the lead and looking to claim another win at the Sepang International Circuit. However, engine failure struck the team, ending his weekend. This gives his Mercedes AMG Petronas teammate Nico Rosberg a massive advantage as the series heads into the final 5 races of the season.

Lewis Hamilton is under the impression that only his engines fail. He wants answers and feels it to be engine sabotage from inside the Mercedes camp.

“My questions are to Mercedes – we have lost so many engines,” the Mercedes F1 driver told the BBC. “There are eight ‘Mercedes’ drivers and mine are the only ones who has failed.

Something or someone doesn’t want me to win this year.

“Someone has to give me some answers and it is not acceptable.” 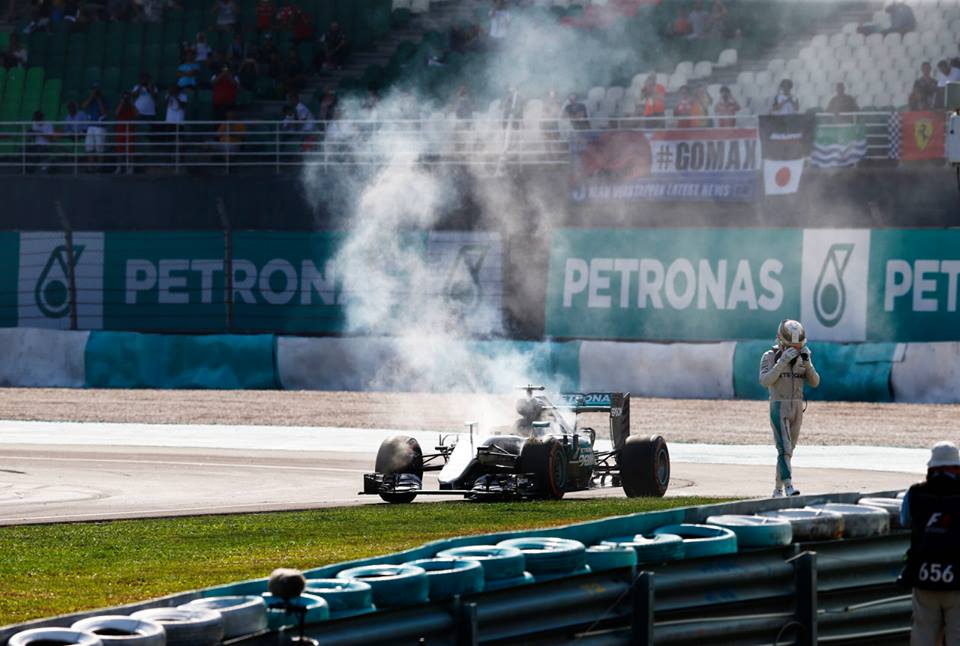 “It’s just odd. There’s been like 43 engines from Mercedes and only mine have gone. It is what it is, we’ll just move forward and try to continue to drive as we had this weekend,” he said.

“Right now, I don’t even know if my car is going to make it. These next five races, I know that I’ve got it in us, my engineers and my mechanics, I know we’ve got it in us.

“But who knows what those next engines that I have are going to do. So I’m just going to keep my head down and hope for the best.

“There’s not really much to do. I’ve just got to move on. The guys did a fantastic job this weekend, and we did everything we could. I did everything I could.

“It is difficult… this can be a very harsh sport,” Lowe told Sky. “But no failure is planned. We work as hard as we can to increase reliability and we have, year on year, increased reliability.

“But for some reason, unrelated to any intention or individual performance, a number of things have fallen on Lewis’ car this year. We have eight Mercedes power units this season – and for some reason, there is no pattern as to why they should fall on Lewis’ car. That is how some things turn.”

“I know Lewis very well and he will not accuse the team,” Lauda said. “This interpretation, I cannot accept it. Lewis knows we do everything possible to give him the best car and the best engine.

“This is ridiculous. And if you speak to Lewis directly, I guess he will not say this.

“We worked for him and for Nico in a perfect way. He’s won two championships so far with us, we’ve finished the most races ever. What do you guys think, we suddenly start to sabotage? Why? It’s completely ridiculous and stupid.”