“We are more than pleased to extend our relationship with the All Star Circuit of Champions for the next two seasons. 2016 proved to be beneficial for Arctic Cat, and I am confident that our continued involvement will only elevate Arctic Cat’s exposure and impact in the world of sprint car racing” Greg Williamson explained, Chief Marketing Officer of Arctic Cat. “All Star fans are hunters, fishermen, farmers, ranchers, outdoorsmen; these are the people most attracted to our products. Having the opportunity to interact with that demographic regularly is a privilege. We are very excited for the season’s to come.” 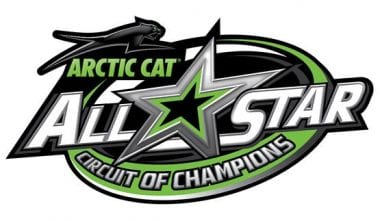 The All Star Circuit of Champions will promote Arctic Cat during 50+ events in 2017, traveling to eight states throughout all areas of the Midwest, Northeast and East Coast. In routine fashion, the Arctic Cat All Star Circuit of Champions will activate the new year with a trip to Florida, headlining five events between February 9 and February 16 at Bubba Raceway Park in Ocala and Volusia Speedway Park near Daytona.

Arctic Cat will not only act as the title sponsor for the All Stars in 2017, but it will also play a major role during a select number of events throughout the season. Similar to 2016, local Arctic Cat dealers, positioned throughout the Northeast and Midwest, will set-up displays at select tracks allowing fans to interact with new products, ask questions to company representatives, as well as engage in ride-alongs and participate in special sales offers that may be conducted throughout the year. Arctic Cat will also award products at the year end championship banquet.

“We are honored to have Arctic Cat with us again in 2017 and 2018. We molded a great foundation in 2016, and now we have the opportunity to build on that foundation during the next two years,” Tony Stewart said, owner of the Arctic Cat All Star Circuit of Champions. “This series is special. We are a family. To have Arctic Cat continue to be a part of this family is something we can all be proud of.”

About the Arctic Cat All Star Circuit of Champions:

All Star Enterprises, LLC, wholly owned by Tony Stewart, d/b/a the All Star Circuit of Champions, is a winged sprint car series. The All-Star Circuit of Champions Sprint Car Series is one of the oldest traveling 410 sprint car organizations and is a staple of grassroots, open-wheel racing. Formed in 1970 by Bud Miller, the series has largely been considered the first ‘outlaw’ Sprint Car organization of the modern era. After a 10 year stint as owner of the All Stars, Miller passed control of the series to Bert Emick in 1980; a reign that would continue through 2002. Guy Webb then purchased the series from Emick in the summer of 2002 and served as the series President for the next 12 years. Motorsports entrepreneur Tony Stewart agreed to terms with Guy Webb to become the sole owner of the original winged sprint car tour in January of 2015.

The Arctic Cat brand is among the most widely recognized and respected in the recreational vehicle industry. The company designs, engineers, manufactures and markets all-terrain vehicles (ATVs), side-by-sides and snowmobiles, in addition to related parts, garments and accessories under the Arctic Cat® and Motorfist® brand names. Arctic Cat Inc.’s world headquarters is located in Minneapolis, Minnesota. Its common stock is traded on the NASDAQ Global Select Market under the ticker symbol “ACAT.” More information about Arctic Cat and its products is available at www.ArcticCat.com.