I almost ignored the recent outcry of the NASCAR Monster Energy Girls. Almost. I caved. After all I’m in my element when I call out the dinosauric repressed portion of the population.

Last weekend NASCAR threw the green flag on the 2017 season, kinda. It was The Clash at Daytona and it was a great race. Despite the season opening with a loud bang, some aren’t happy, at all.

Though, I feel this is just the beginning. “The Clash” is a tiny audience. The real audience comes February 26th for the Daytona 500. That’s when the real backlash of the NASCAR Monster Girls will begin.

The complaints on the new Monster Energy victory lane girls mostly stem from the keyboards of the female fan base. However, it’s not just females, many are upset. They took to bashing the girls directly, on various forms of social media. The modern day bully technique.

I actually thought the rest of these dinosaurs died off at this point. Apparently I was wildly mistaken. They’ve all surfaced, at once, to voice their repressed complaints. 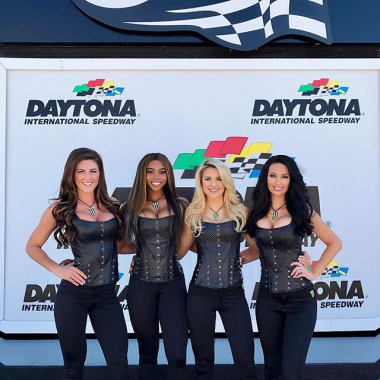 “It’s not family friendly” Ok, I guess nothing else on TV is either. You must be really busy hiding the remote from your kids and monitoring everything they do, 24/7. Almost too busy to be complaining about Monster Energy corsets. These Monster girls won’t lead your daughter to “the pole”. Though, a rebellion against your over-protective parenting philosophy might just lead them in that direction.

I’ve never even understood that argument. What is “family-friendly” anyway? Aside from my personal lack of an understanding of the term, I’m also aware it holds a completely different meaning in every country. NASCAR is global. In other words, nothing on a global scale will ever be “family friendly” for everyone.

I thought censorship would be dead by now. It’s such a ridiculous concept. It’s up to you to explain to your kids what life is, not NASCAR or TV censors. Mark Twain said it best, “Censorship is telling a man he can’t have a steak, just because a child can’t chew it.” I’ll never forget that quote. I use it frequently, I keep it stacked in my vast artillery of ammo to use against the vapid politically correct, family-friendly, and overly sensitive types.

I guess these particular human-beings haven’t been to a beach, anywhere, in the last 50 years. I haven’t either, sand is gross. But, I do know a beach is widely considered as a “family-friendly” place. Yet, men and women both wear far less clothing at any beach than these Monster girls did. The NASCAR Monster Energy Girls are fully dressed. Fully, head to toe. For Florida weather, they were borderline overdressed.

The one that really gets me going is the “too skinny” part. The politically correct portion of this participation trophy society needs a reality check. The NASCAR Monster Girls weren’t too skinny, they were toned, in-shape. Imagine that, a job that uses your physical appearance as a marketing tool requires you to look a certain way.

These are models, they worked hard for their bodies. Being fit, is part of the job requirement as a standing billboard. It’s what sets them apart from the failed models that you’ll find at the strip club. Not every human, male or female, can whip themselves into shape like these girls have. If they could, everyone would get paid to stand next to the winning NASCAR driver.

So as we understand the initial judgement, we have absolutely no intention on offending anyone and we encourage all the fans to come out to a NASCAR event this year and let us change your impression. Let us introduce you to the fun loving Women behind our bold and eye catching uniforms that we wear proudly!

“Why doesn’t Monster have any victory lane guys?” Well… I suppose when Danica starts winning it will become a solid argument. She finished 4th, so maybe soon. 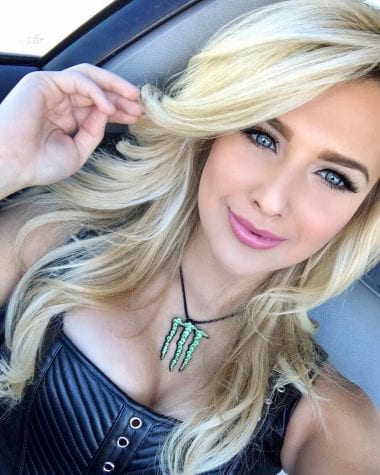 I’ll take all-black over a massive yellow “Sprint” logo any day. It’s actually far more classy than previous walking billboards. The Monster brand logo is minimal on “the girls”, you almost have to search to find it. Yet, that’s the beauty of modern day marketing.

“Too much makeup” Incorrect. I feel like I’m in Nazy Germany. Since when did you become the dictator that decides what other people can and cannot put on their own faces? These girls signed up for the job, they like it. Let them do what they want. Don’t lobby their job stripped from them, dickhead.

“Their outfits and attitude aren’t friendly, it isn’t NASCAR” When was NASCAR friendly exactly? This is a sport that was basically founded on it’s attitude. Dale Earnhardt wrecking Darrell Waltrip for the win. Dale Earnhardt wrecking Terry Labonte for the win. Matt Kenseth wrecking Joey Logano not for the win, just because it made him feel better. Hell, the entire sport basically blossomed in 1979 with the backstretch fight at Daytona, during the first televised race.

Sprint wasn’t right for NASCAR. That friendly attitude of their entire brand wasn’t a good fit. Monster Energy is the correct fit.

“Where’s their firesuits?” I’ve yet to see a car catch fire while it’s turned off, sitting in victory lane. When that happens, maybe they’ll put firesuits on the NASCAR Monster Energy Girls.

“How do I explain these outfits to my daughter?” Not sure. I don’t have a daughter. But I’m sure you’ve got it all figured out by now. If you feel this needs to be explained then I’m sure you have to explain things rather frequently.

If anything Monster could have taken a bolder approach with the trophy girls. After hearing their early NASCAR plans to bring the girls and the party, I thought they would. Aside from Sprint’s version, it’s one of the tamest we’ve ever seen in any form of motorsports. Honestly, I was hoping they’d be in an all-black long-sleeve midriff with perhaps a skirt. I guess, that was just overly-ambitious wishful thinking on my part.

As I write this I can imagine the tears running off your beat red, puffy face. The salt water hitting your keyboard with a sizzle. Get out the crayons, draw up your protest signs. I never show much emotion. Just know, deep inside, your sign makes me smile.

Did I take it to far? Was it family-friendly? I can never tell the difference. In this whole thing, I didn’t use the f-word, not once! Surely that gives me bonus family-friendly playoff points.