The grid wasn’t set in typical fashion. The field was actually set, via race results. The Daytona Duel’s earlier in the week set the inside and outside row.

It was great! There’s nothing worse than single car qualifying at Daytona. Can-Am Dual at Daytona race #1 set the inside row. Can-Am Duel #2 set the outside row.

Except for the front row. The front row was set on single car qualifying results. NASCAR threw that in there just to make things confusing. 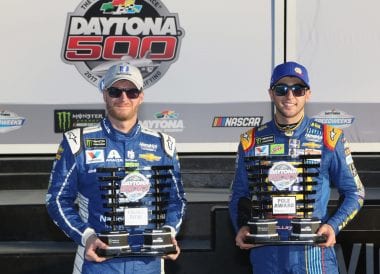 But it’s not that confusing. Polesitter, Chase Elliott and outside row Dale Earnhardt Jr will lead the field based on their qualifying times. Their results in the Dual had no effect on starting position.

This is Dale Earnhardt Jr’s first race since missing most of the 2016 NASCAR Cup Series season. He makes his return, today, where he starts 2nd.

36 teams were gifted an automatic starting spot in the 2017 Daytona 500. The rest of the teams, were battling for the remaining 4 spots in the field. Elliott Sadler and Brendan Gaughan grabbed two of those spots in single car qualifying. Corey Lajoie and DJ Kennington raced their way into the show!

Daytona International Speedway is a 2.5 mile high banked over. The track features restrictor plate racing. Plate racing keeps cars in a pack and your eyes glued to the screen. New for 2017, that restrictor plate is a bit smaller.