Below is a recap including the 2017 Daytona 500 results sheet from today’s wild race! A spoiler free race report as the winner is purposely excluded in the titles above. 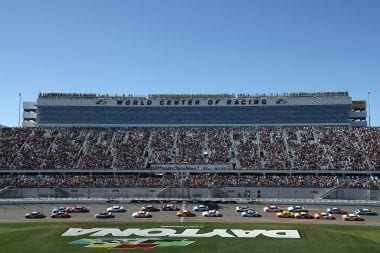 The 2017 Monster Energy NASCAR Cup Series began with issues right out of the gate. The start of the race had a slight delay to the start. Scoring issues had to be sorted out before officials dropped the green flag.

Green. Chase Elliott and Dale Earnhardt Jr led the field up to speed. The 500 mile race started aggressive. 3 wide on mile 10 of 500. Earnhardt slipped through the middle.

Joey Logano had a lose wheel around lap 10. Interesting, given those are the shoes he left the garage wearing. They had days to make sure they were tight. The #22 caught the head of the field, he stayed there. 1 inch from going a lap down as fellow Ford driver Kevin Harvick pushed him to the lead lap.

The Toyota drivers had an interesting take on a Stage racing strategy. Lap 15, every Toyota driver pits at once. That’s the fuel window. The plan was for them to all enter and leave pit road then wait until after stage 1 was complete before pitting again.

However, multiple drivers had issues on pit road; flat spots, speeding. It’s a wet dream for the vast anti-Toyota camp. Multiple Toyota’s go a lap down, or several laps down early and all at once. However, it likely would have been all of them if they weren’t saved by a caution a few laps later, they were saved by 3 seconds.

The anti-Toyota NASCAR fans had a short party. 22 laps to go in stage 1, the Toyota drivers all reached the front of the field again.

A battle of Ford vs Toyota was forming up for the first stage win. Kyle Busch leading the Toyota camp. Brad Keselowski, Ryan Blaney and Kevin Havick swapping roles of the lead Ford driver.

10 to go in stage 1. David Ragan slaps the front straight away wall right in front of Dale Earnhardt Jr and the rest of the field. 3 wide gone wrong but no caution. Meanwhile, Wood Brothers Racing is fighting Kyle Busch for the lead.

5 to go. Dale Earnhardt Jr, Jimmie Johnson and few new faces have surfaced. They are after stage ending points as well. 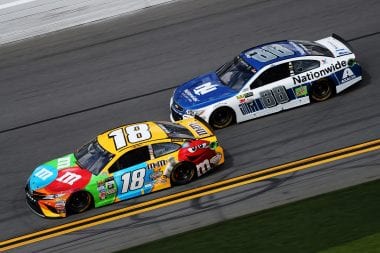 Brad Keselowski slides through his pit box. More Toyota’s take the wave around.

Green flag on stage 2, lap 67 of 200. Kyle Larson leads the field. Denny Hamlin pulls to the inside, a deliberate move to let the field go by. He told the crew he didn’t have a good feeling about how they were racing.

The race is on repeat. Lap 22 of stage 2, all the Toyota teams pit again under green. Enter together, leave together. Matt Kenseth gets lapped, a lap later Denny Hamlin falls as well. Kyle Busch and Erik Jones catch the front of the field and stay ahead of the leader. They lead the field, on the tail end of the lead lap as Kevin Harvick try’s to lap the stage 1 winner.

Lap 31 of stage 2, now all the Ford’s take their turn on it road. Chevrolet has the top 8 positions on the track, they’ve yet to pit. Dale Earnhardt Jr is your leader. 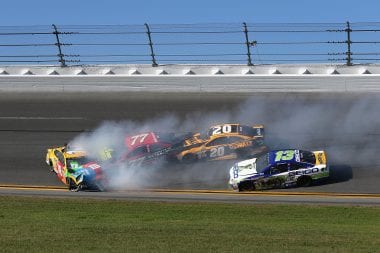 Big crash! Kyle Busch spins, out of nowhere. Left rear tire flat, he collects the Toyota’s of Matt Kenseth, Erik Jones, a few others including the race leader. Dale Earnhardt Jr drives over the top of Kyle Busch, airborne goes the #88. Dale Earnhardt Jr is on the 5 minute clock. Red Flag.

Kyle Busch drives to the garage, the stage 1 winner is officially out of the race. He comments from the garage, “Nothing we did wrong. Goodyear tires just aren’t very good at holding air.”

Red flag is still out. It’s been a 20 minute plus clean up time. Not sure why? Now would be a great time to show the Monster Energy Girls, or something that’s moving!

Red flag lifted. Elliott Sadler is your leader, with minor right front damage. He pits and takes 1/2 the field with him. Dale Earnhardt Jr drives his car back to the garage, he’s officially out of the Daytona 500.

Kevin Harvick, Danica Patrick and Kurt Busch lead the field. In fact, it’s an ambush, a Ford take-over. The first car that isn’t a Ford, you have to go all the way back to 7th. Two Chevrolet’s in the top 12, the rest of the cars feature blue ovals.

Green. Under 10 laps to go in stage 2. Kevin Harvick jumps out to the lead.

Coming to the line, they are getting racey. Joey Logano and Kurt Busch aren’t satisfied with their positions. Their weaving all over the track. Joey Logano fakes a move to the outside, end up on the inside of Kevin Harvick. He comes up a 1/2 car length short of the stage win. 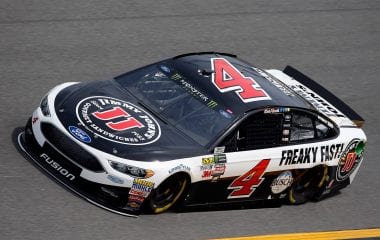 Dale Earnhardt Jr has exited the medical center. He comments on the race, “At least we went out from the lead.” 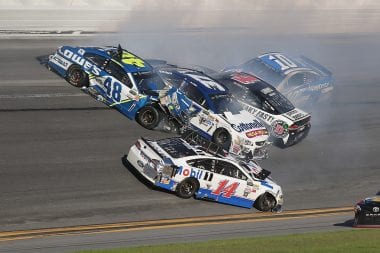 Jimmie Johnson comments on the wreck. He speaks over the radio. “Really? I mean the whole back straightaway, two of them trying to crash me.”

They are 3 wide again. 64 laps to go. The #21 of Ryan Blaney is heading to pit road. Elliott Sadler, the trailing car got the message. Jeffrey Earnhardt and others did not. Another pile-up. 8 or so more cars are collected.

Green. Joey Logano and Austin Dillon lead the field. Caution. The #23 car comes across the nose of Chase Elliott. Pit lane opens, most of the field pits.

Green again. Cole Whitt leads the field, Aric Almirola on the outside. Joey Logano and Kyle Larson waste no time. They lock directly to the bumpers of the front row. Meanwhile, 3 wide again for 10th. Martin Truex Jr is sideways, he saves it. Continues rolling. Chase Elliott makes it 4 wide on the back-straight. So far, they’ve all survived.

Less than 40 laps to go. Joey Logano has returned to the lead. He takes it from Kyle Larson.

27 to go, Chase Elliott is on fire. He wants the lead from Joey Logano. He has help from Martin Truex Jr and Kurt Busch. Chase Elliott completes the pass.

18 to go, single file behind race leader Chase Elliott. The entire field is running the high side of the racetrack. The calm before the storm. Former leader, Joey Logano is at the tail of the line, around 15th.

Kurt Busch sits 3rd. He’s just been told he will need to flip the fuel reserve switch with 1 lap to go. He can’t make it to the end on the primary tank.

5 to go. The field is still single file behind Chase Elliott. Unique, it’s single file at the high-side of the racetrack.

Who’s going to make the move?

Chase Elliott is out of gas! He flipped the switch, continues but he lost the lead to Martin Truex Jr. 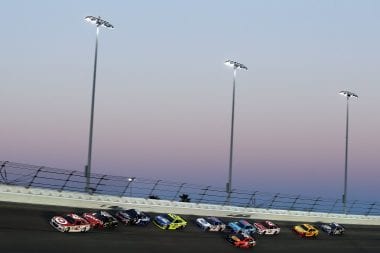 Kyle Larson takes the lead from Martin Truex Jr. Still single file at the top of the racetrack?? I haven’t seen this in the closing laps at Daytona before.

1 to go, Kyle Larson is out of gas. Kurt Busch inherits the lead.

From victory lane Kurt Busch speaks on the amazing race. How did he do it? He explains, “The more that becomes unpredictable about Daytona the more it becomes predictable, to predict unpredictability.”

He continued, “I mean this car is completely thrashed. There’s not a straight panel on it. The strategy today, who knew what? To pit when. What segments were what? Everybody’s wrecking as soon as we were done with the 2nd segment. I don’t know. I mean the more that I’ve run this race the more I’ve just thrown caution to the wind and let it rip and just elbows out. That’s what we did.”

The 2017 Daytona 500 winner is Kurt Busch. He was followed by Ryan Blaney, AJ Allmendinger, Aric Almirola and Paul Menard. All names that were hardly mentioned all day. What a race! 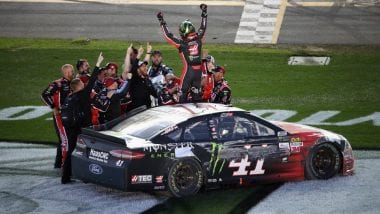 Kurt Busch wins his first Daytona 500. At the same time, this was the debut race for Stewart-Haas Racing in their new Ford machines. A win in their first race with the new manufacture.

The cars look like they’ve run 500 laps at Bristol, not 500 miles at Daytona. This race was something special. Nearly every car has some sort of damage, at some corner of the car. In some cases, like the race winners car, all corners of the car were damaged.

A total of 5 cars had no damage. Michael Waltrip was one of those cars. He finished 8th, in his final NASCAR Cup Series race. 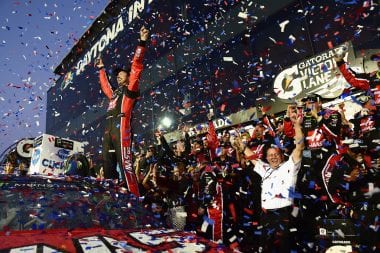 NEXT POST
COTA NASCAR Race Wanted by Circuit of the Americas