Today is the 2017 Daytona 500! It’s Daytona Day and here’s a list of storylines you you need to know before you watch the race.

Maybe you tune out NASCAR news during the off-season. Or maybe you’re no longer a fan, but you’ll watch the Daytona 500 anyway. Possibly to give it one last shot, or maybe just out of pure tradition.

A lot has changed since 2016, a lot. Beyond rule changes there’s lots of interesting things going on within the upcoming 2017 Daytona 500. 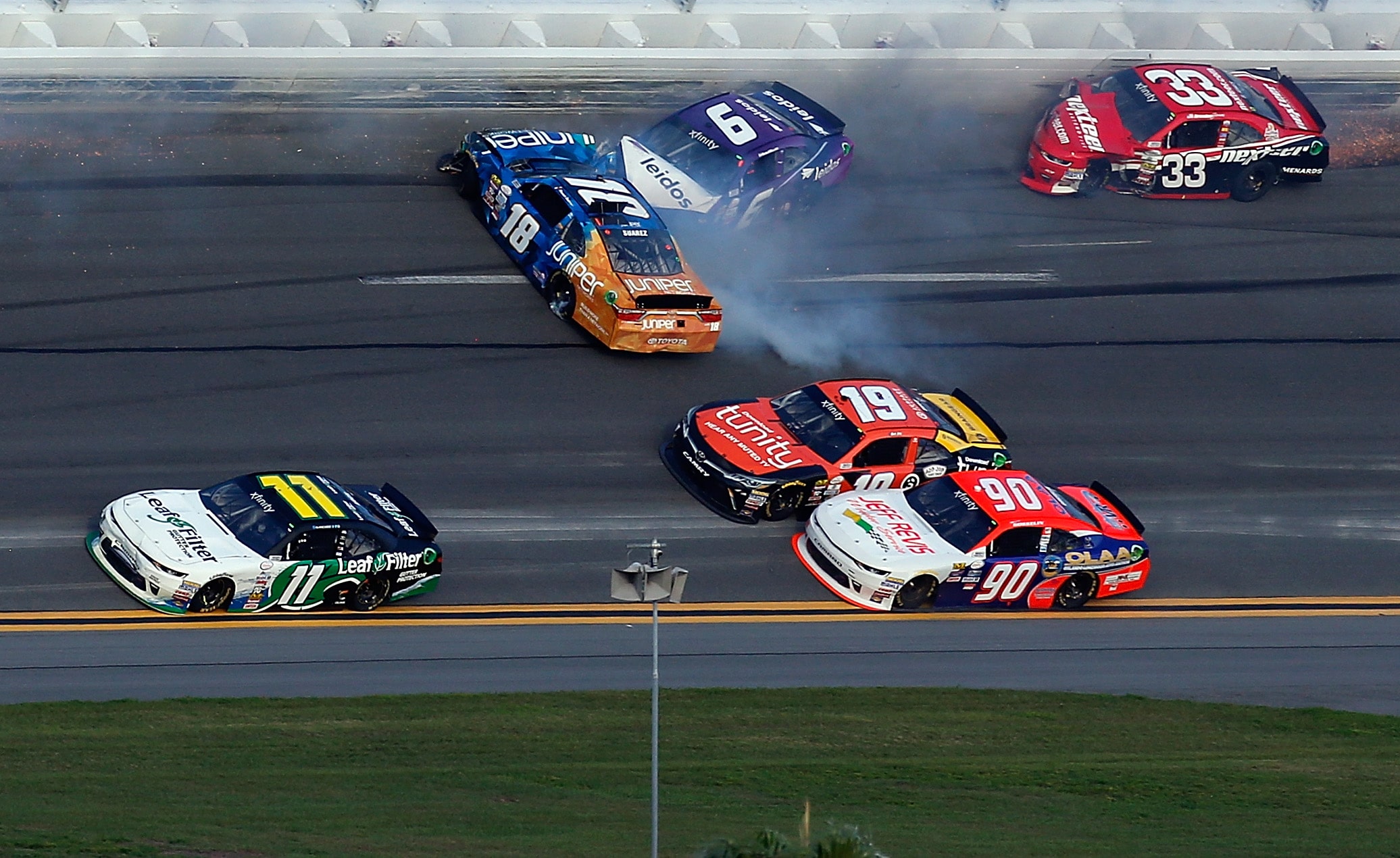 I think that was the whole idea, chaos and excitement.

Well, based on what we saw in both the NASCAR Camping World Truck Series races and the NASCAR Xfinity Series, mission accomplished. For the most part, it’s a real mess.

Last night’s Xfinity Series has had more “big-one’s” than “small-one’s”. At least 5 incident’s involved 5 or more cars in last nights race. The goal was to make drivers race harder, throughout the duration of the entire race. It certainly did that. At the superspeedway’s, instead of everyone crashing on the final lap, drivers are given 3 total attempts to crash the field for the sake of the win. 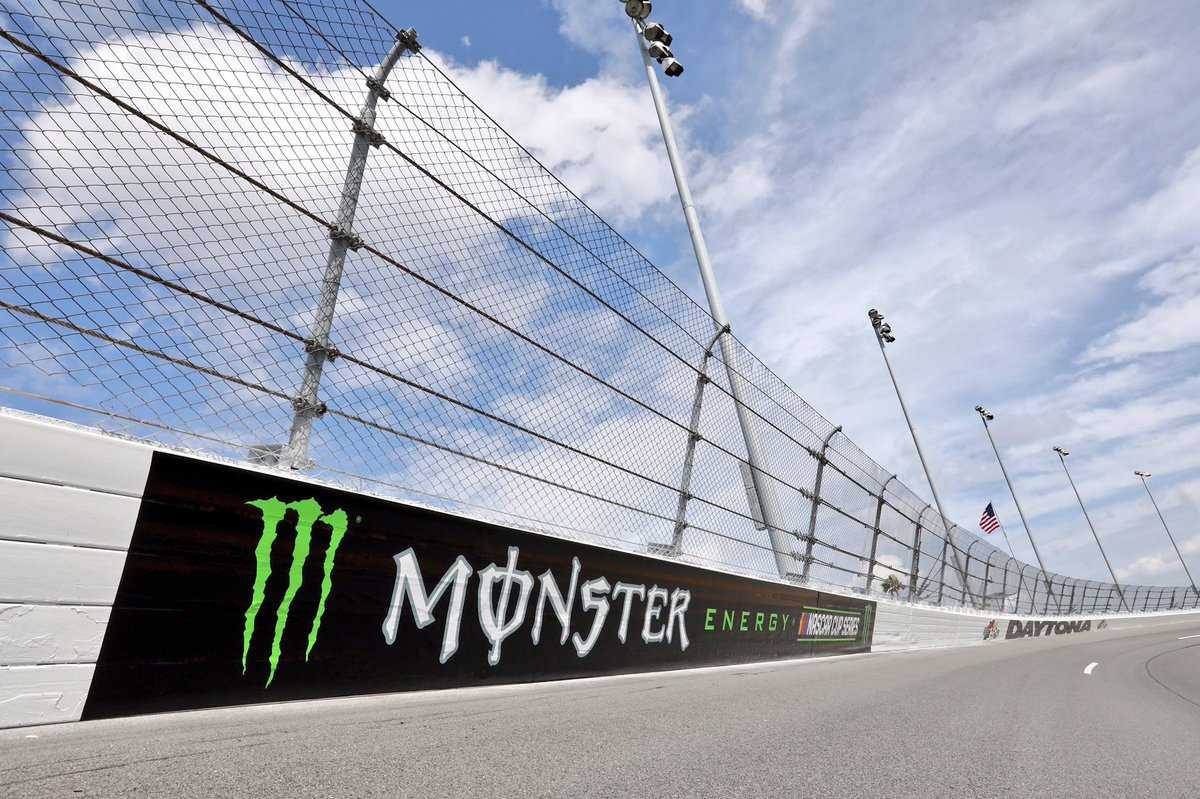 They are here to stay. In the offseason NASCAR was scrambling to find a replacement entitlement sponsor for the premier series of the sport. The deal was signed, late. Very late, so late that a lot of the Die-casts being sold at the Daytona International Speedway this weekend don’t feature the Monster Energy logo.

Monster Energy was one of the few candidates that Brian France personally reached out to. Over here, we aren’t usually on the same side as Brian France. However, in this case, he made a good choice. There’s very few companies out there that fit with the NASCAR brand better. 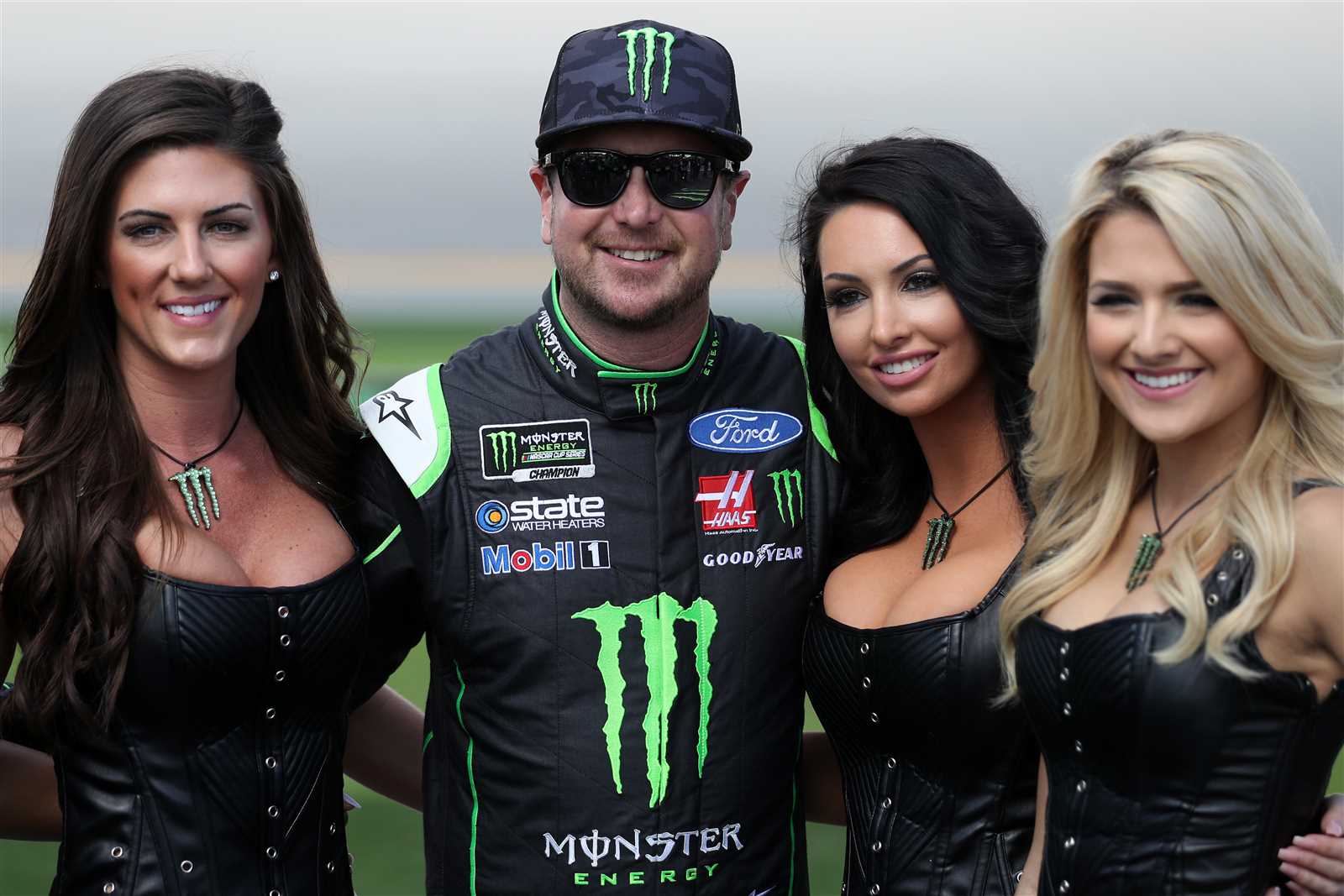 In the eyes of some, that new sheriff is a bit of a Banshee.

Monster Energy joined NASCAR with the plans of “bringing the party and the girls” back to NASCAR. In early presentations of their marketing campaign were on display for the first time this week. It’s flustered the wildly repressed side of the NASCAR Fan Base.

It’s a rather disappointing statement from a significant percentage of the fan base, mostly, the female portion. In the opinion of RacingNews.co the Monster Energy Girls are one of the best things to happen to NASCAR. The sport should be edgy, that’s important.

That was just The Clash at Daytona. For the Daytona 500 Monster Energy is bringing a whole gang of girls to the show. 19 Monster Energy Girls will invade Daytona International Speedway today.

4) Dale Earnhardt Jr Makes His Return to the Sport 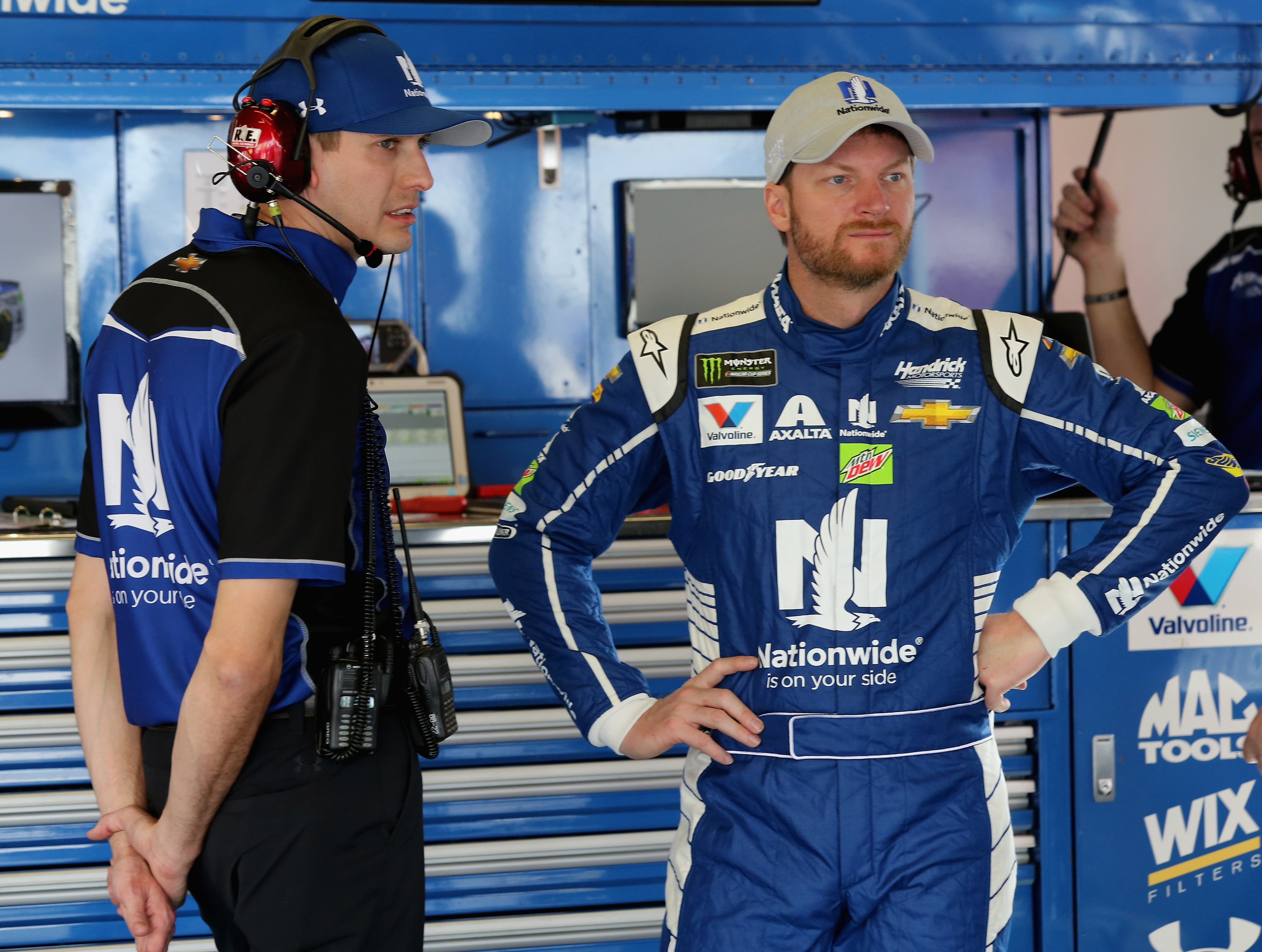 This is a big deal.

Dale Earnhardt Jr was sidelined for most of the 2016 NASCAR Cup Series season. His last NASCAR race was July 2016.

Two incident’s early in the 2016 NASCAR Cup Series season brought concussion like symptoms to Dale Earnhardt Jr. Those symptoms forced him to climb from the car. Alex Bowman and a semi-retired Jeff Gordon filled the seat.

Dale Earnhardt Jr immediately went into a long recovery process. He’s worked hard to get to the starting grad today. A daily task of jobs that stimulated his mind, stimulated his symptoms, within a controlled environment.

Now, Dale Earnhardt Jr returns to the track a changed man. He’s noticeably different. Sirius XM Radio (Channel 90) nailed it with their explanation. They believe Dale Earnhardt Jr has found himself, his true personality has come out during his time away from the sport. They noted on the show they Dale Jr might have been trying to be his dad in previous years. This year, he’s noticeably changed, morphed into his own-self.

He’s also a married man. During his time away from the sport he married his now wife, Amy Reimann.

He’s NASCAR’s most popular driver. So popular that he’s won the award to go with it. Won it 14 times, in a row. He also happens to be damn-good at superspeedway racing.

His return is a big deal for viewership of the 2017 Daytona 500. It certainly helps that he qualified 2nd!

What effect will this have? It basically just makes the car slower. This smaller restrictor plate is in addition to a 20lbs increase of the car itself, which also slows it down.

This is big news. In the NASCAR Xfinity Series race, the #3 car basically ran out of tires. Partially, due to their own fault. They cleaned 4 tires before the start of the race with chemicals. That’s illegal. So, NASCAR took that set away. Leaving them with 1 less set on-top of the reduction.

If a team flat spots a set of tires in the 500 mile race, they could put themselves in a similar situation. Tires aren’t of huge importance at Daytona or Talladega but it is something you should be aware of.

Last year upon the announcement NASCAR commented on the new tire rules, “It’s not a huge reduction, it’s a comfortable reduction but it’s kind of moving in that direction.”

7) 4 Teams Qualified/Raced Their Way Into the Daytona 500

36 teams were gifted an automatic starting spot in the 2017 Daytona 500. The rest of the teams, were battling for the remaining 4 spots in the field. Elliott Sadler and Brendan Gaughan grabbed two of those spots in single car qualifying. Corey Lajoie and DJ Kennington raced their way into the show!

8) Who is the hell is DJ Kennington? 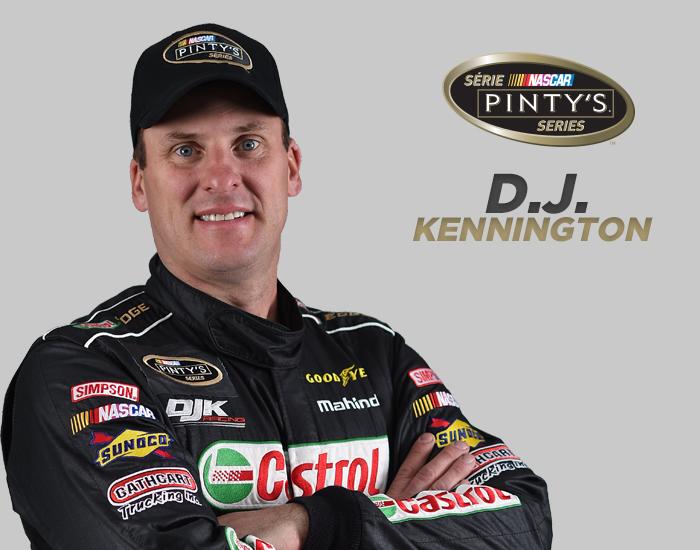 Until this week, I had no idea!

DJ Kennington is a Canadian stock car racing driver in the NASCAR Pinty’s Series (Canadian NASCAR). They run a mix of road-courses and short tracks throughout Canada.

If I can through in a snarky comment… the NASCAR Pinty’s schedule is 1000 times better than the NASCAR Cup Series schedule!

The Daytona 500 has a somewhat leveled playing field. The underdog has a chance. If you’re the type to root for the little guy or the little team, DJ Kennington is your man! 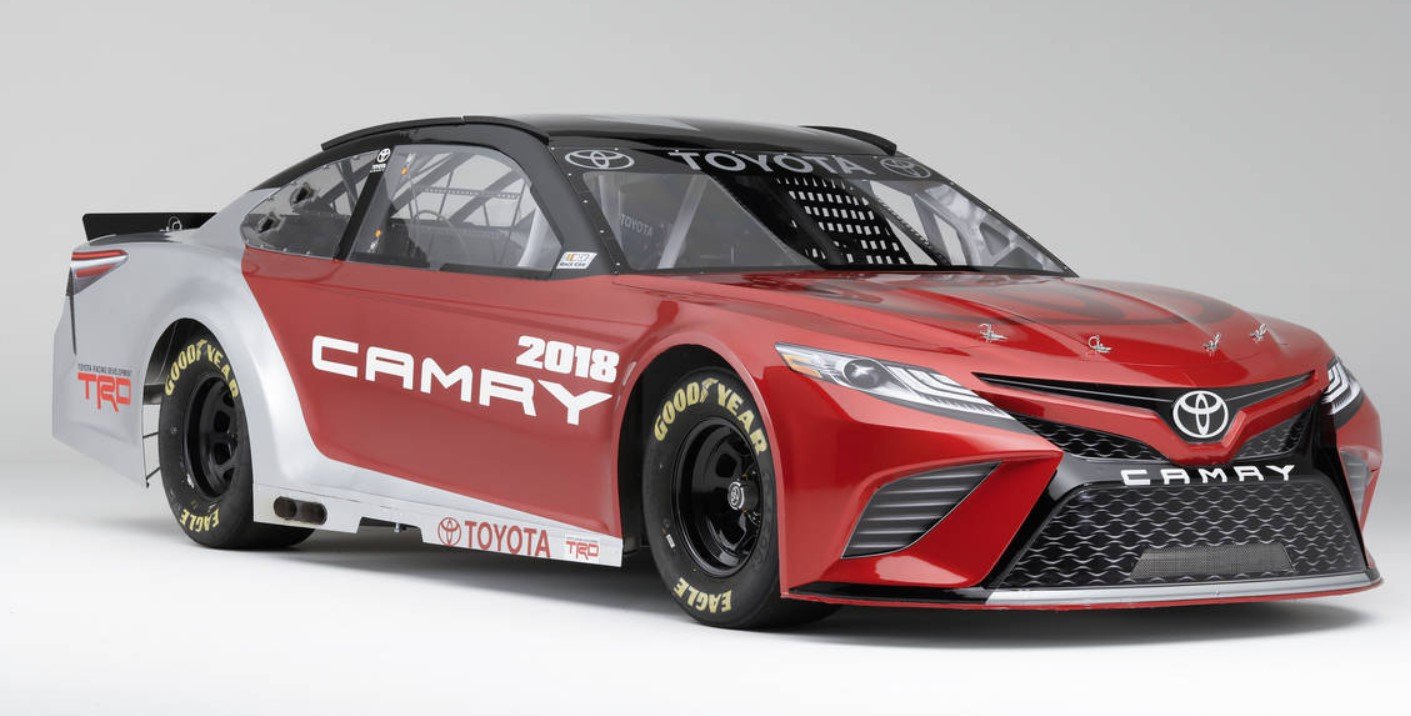 There’s a new template on the grid in this year’s Daytona 500. The Toyota teams have a boldly styled 2018 Toyota Camry, which they are running in the 2017 Monster Energy NASCAR Cup Series.

Appearance wise, it looks like a massive difference. However, the downforce levels on the new Toyota Camry are actually “about the same” as the previous version of the same car. The downforce levels were of course approved by both NASCAR as well as the other manufactures competing in the sport.

Beyond that, it just looks striking!

When it comes to superspeedway racing, the Toyota drivers have figured out how to work together. In The Clash at Daytona earlier in the week, Joe Gibbs Racing dominated. The results fail to show their true domination of that event. It took a gaggle of Ford machines to break of the party in the final laps. 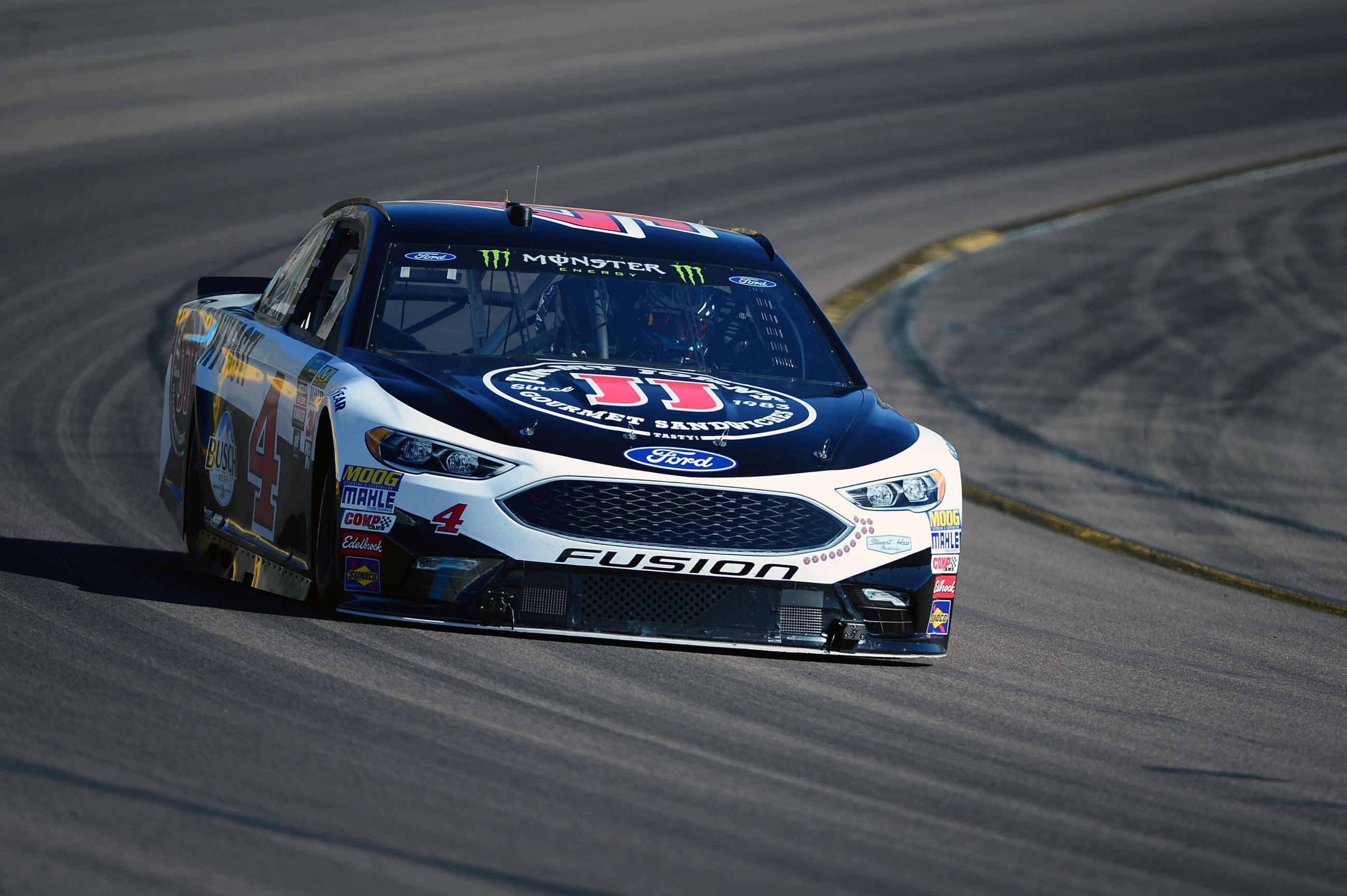 The Penske drivers used to be the only two Ford cars in the field, basically. Now, they have 4 more drivers that they’d prefer to work with.

This was proven very important in the Clash race spoken about earlier. I mentioned the Joe Gibbs Racing domination, which was broken up in the final laps. It was broken up by Brad Keselowski, Joey Logano and Kevin Harvick. 3 Ford machines worked together to break up the 1-2-3-4 running order of the Toyota’s. 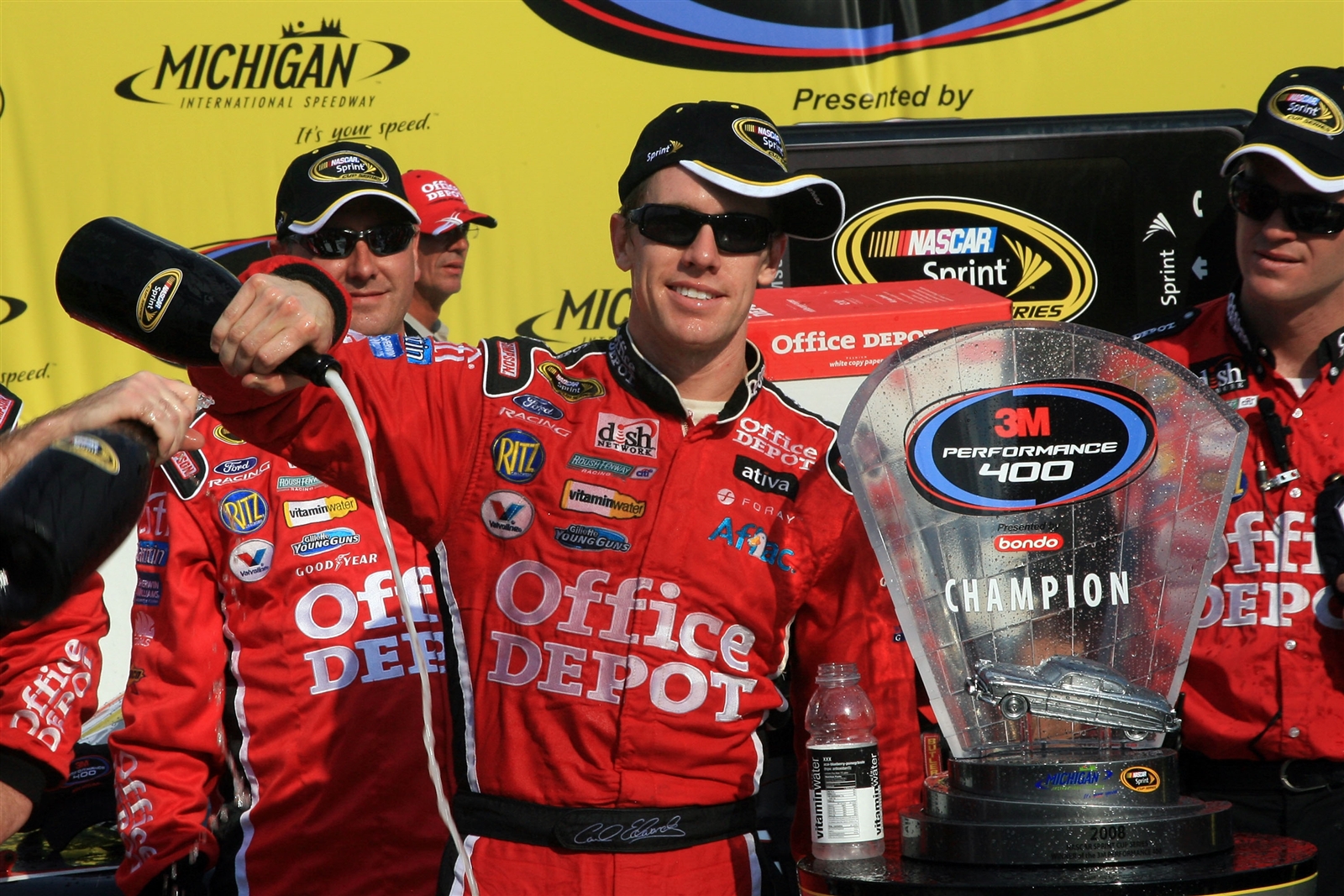 The man made the final 4 in 2016. He was battling for a NASCAR championship, just a few months ago. Now after a shock announcement, he’s absent on the 2017 grid.

“This has been a very difficult decision for me but I’m confident that it is the right one,” Edwards said in a statement provided by JGR. “I could not have a better situation in racing than the one I currently have, so stepping away from that certainly took a lot of consideration.”

It’s fishy. He could be going into politics.

Another rumor is that Team Penske handed him a big check to sit out during the 2017 season. Penske could be adding a 3rd full-time car in 2018, driven by Cal Edwards. At this point, that’s strictly a rumor but worth noting. After all, that’s the only way any of this would make any sense.

The 2016 NASCAR Xfinity Series champion has filled his seat. Daniel Suarez will drive the #19 in today’s race at Daytona International Speedway.

RELATED: Carl Edwards Retiring Simply because He Wants to

Greg Biffle hasn’t really retired. He still believes that he will return to the Monster Energy NASCAR Cup Series.

However, for 2017 he doesn’t have a ride. He made the decision to leave Roush Fenway Racing over the winter.

Since then, Roush Fenway Racing hasn’t replaced Greg Biffle. They couldn’t sign a full-time sponsor to field his former car. Thus, the team has downsized to get a two car team. 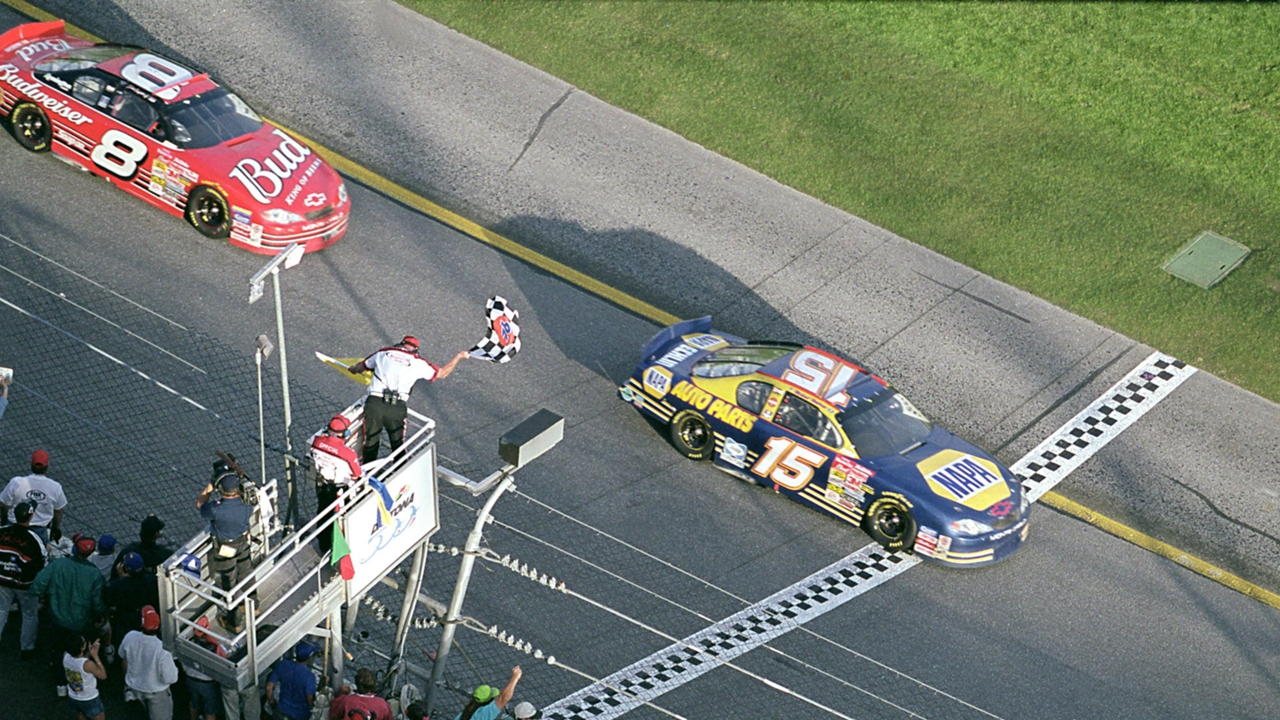 Today is Michael Waltrip’s final race. He picked a good one.

Michael Waltrip will drive the #15 fielded by Premium Motorsports. HScott Motorsports sold their #15 NASCAR Charter to Premium Motorsports recently. The team ran the #55 & #98 in 2016. They recently became owners of the number #46, which was sold to Furniture Row Racing and transformed into the new #77 team for ErikJones.

Michael Waltrip has collected 4 wins and an equal number of poles in the NASCAR Cup Series. 3 of those wins came at Daytona International Speedway. His 4th and last win, came at Talladega Superspeedway in 2003. All four were collected between 2001-2003 while driving for Dale Earnhardt, Inc. 132 top 10’s were gathered over his 32 year career.

The grid is set. It was weirdly set, unlike any event in years past.

Chase Elliott and Dale Earnhardt Jr will lead the field to the green flag on the 2017 Great American Race.