DAYTONA BEACH, Fla. (March 8, 2017) — NASCAR today announced the 20 nominees for the NASCAR Hall of Fame’s Class of 2018, as well as the five nominees for the Landmark Award for Outstanding Contributions to NASCAR. Each name made an indelible mark on the sport, whether from behind the wheel or atop a pit box … or even from inside a broadcast booth. After long careers that have helped shape NASCAR, all are now one step closer to its highest honor – enshrinement into the NASCAR Hall of Fame.

Included among the list are five first-time nominees, all racing heroes who earned race wins, championships … and millions of fans.

Among them are two owners who have each eclipsed the 100-win mark (Joe Gibbs and Roger Penske), a driver who combined for four championships in NASCAR’s Modified and Late Model Sportsman division (Red Farmer), an extreme talent who collected 19 wins before his too-soon passing (Davey Allison) and the 2000 premier series champion (Bobby Labonte). For a full list of nominees, please see below.

The nominees were selected by a nominating committee consisting of representatives from NASCAR and the NASCAR Hall of Fame, track owners from both major facilities and historic short tracks and the media. The committee’s votes were tabulated by accounting firm EY.

Added to this year’s list of Landmark Award nominees are Jim France and Alvin Hawkins. Three nominees return for the Landmark Award: Ralph Seagraves, Janet Guthrie and Squier (more on each below).

Potential Landmark Award recipients include competitors or those working in the sport as a member of a racing organization, track facility, race team, sponsor, media partner or being a general ambassador for the sport through a professional or non-professional role. Award winners remain eligible for NHOF enshrinement.

Following are the 20 nominees for induction into the NASCAR Hall of Fame, listed alphabetically. 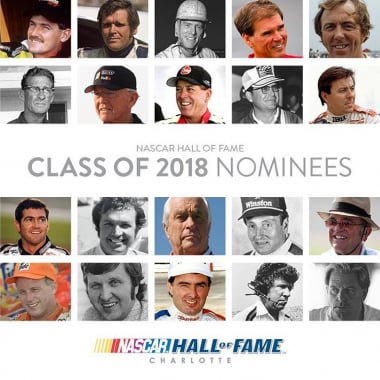 Buddy Baker, won 19 times in NASCAR’s premier series, including the Daytona 500 and Southern 500

Bobby Labonte, won a championship in both the premier series and XFINITY Series

The five nominees for the Landmark Award, listed alphabetically, are as follows…

–       Drivers who have competed in NASCAR for at least 10 years and been retired for two years are eligible for nomination to the NHOF.

–       In addition, drivers who have competed for a minimum of 10 years and reached their 55th birthday on or before Dec. 31 of the year prior to the nominating year are immediately eligible for the NHOF.

–       Any driver who has competed for 30 or more years in NASCAR competition by Dec. 31 of the year prior to the nominating year is automatically eligible, regardless of age.

–       Drivers may continue to compete after reaching any of the aforementioned milestones without compromising eligibility for nomination or induction.

–       For non-drivers, individuals must have worked at least 10 years in the NASCAR industry.

–       Individuals may also be considered who made significant achievements in the sport, but left the sport early due to a variety of circumstances.