2013 Daytona debris lawsuit has been resolved. One more, of many NASCAR lawsuits filled from the same crash.

In February 2013, Kyle Larson found himself grinding across the top side of the wall. Grinding against the fence, his NASCAR Nationwide Series machine was against the catch fence. A catch fence that became a racecar cheese grader.

Larson crossed the finish line in 13th. He did that without an engine or either front wheel. One of the wheels and many other parts were sent into the grandstands.

As the field collided, the grandstands erupted. Far too many ‘racing fans’, were thrilled to see the big one at Daytona. They were most excited to see Kyle Larson sliding across the fence than they were to see a great race. It was a crash that could have taken a life on either side of the catch fence. 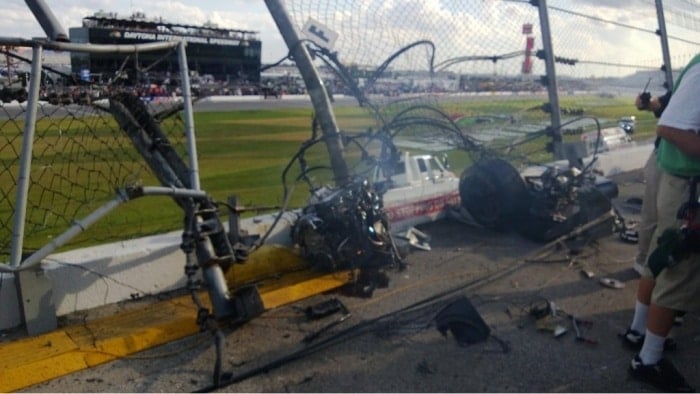 When the dust settled and the engines were shut down, there was a hole in the catch fence. The barrier between racetrack and grandstands, was torn away.

Several fans were injured from the debris. The number of fans reported with injuries varied. As many as 33 fans suffered various injuries.

The news out of Daytona went National. In the eyes of most, 33 fans were injured at Daytona. What I saw, 33 fans that will never cheer for a crash ever again.

NASCAR has been settling a bulk of these lawsuits out of court. Since the 2013 Daytona crash incident, groups of lawsuits have been issued. NASCAR has settled several per year.

Gregory A. Presnell, Judge for the United States District Court for the Middle District of Florida has just dismissed the lawsuit. 2013 Daytona debris lawsuit case dismissed after a settlement was reached last month.

NEXT POST
What the hell is NASCAR doing at Indianapolis Motor Speedway anyway?