MOORESVILLE, N.C. — Action sports legend Travis Pastrana will join Niece Motorsports for select events during the 2017 season, kicking off with a test on Tuesday at Charlotte Motor Speedway in the No. 45 Chevy Silverado.

Pastrana’s most recent NASCAR Camping World Truck Series start came in 2015 at Las Vegas Motor Speedway. In addition to his NCWTS experience, Pastrana has one pole and four top-10 finishes in the NASCAR XFINITY Series, all coming in 2013.

He’ll get behind the wheel of a NASCAR ride once again at Las Vegas Motor Speedway on Saturday, Sept. 30 at 8 p.m. ET on FS1 in the Las Vegas 350.

“I love NASCAR, and Las Vegas is always a good time, so I’m really looking forward to racing there later this season,” said Pastrana.

“The seat time at Charlotte will be a huge help for me to get up to speed and for the team to get a solid base setup for when we show up to race later in the year. I’ve actually worked with several of the people on this team in the past. It’s a fun group and we have a good rapport.

“NASCAR is something that challenges me. I’ve done a lot of work over the past couple of years to try and improve my pavement skills. I’m racing my first full year of Rally since 2010, and I’m fresh off my first win in over a year, so it’s really exciting to be able to get behind the wheel again and see what we can do in the Truck Series.”

To get the week started, Pastrana will host an event in conjunction with K1 Speed in Concord, North Carolina from 6-7 p.m. ET, including autographs with fellow Niece Motorsports driver T.J. Bell. More information on the event can be found here. 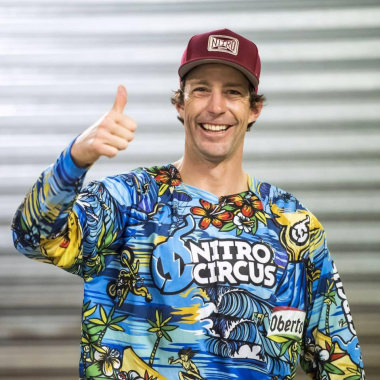 Pastrana reunites with Cody Efaw, who served as his car chief in the NASCAR XFINITY Series in 2013. In 2017, Efaw has assumed the role of crew chief of the No. 45 Chevy at Niece Motorsports.

“Any time you can team up with someone you’ve worked well with in the past, there’s obviously a level of comfort there,” said Pastrana. “I know the group of guys that Niece Motorsports has assembled is going to give me a great shot at running well.”

Serving as the primary sponsor for Travis Pastrana’s NASCAR return in the race at Las Vegas Motor Speedway will be Weinerschnitzel. Additionally, Black Rifle Coffee Company, SilencerCo, Nitro Circus, Alpinestars and Palms Casino Resort will provide sponsorship support to the No. 45 team for the race.

Niece Motorsports, which is owned by Marine Corps veteran Al Niece, has competed in a partial schedule during the 2017 season, with plans of running full-time moving into 2018 and beyond. “We are thrilled to have Travis behind the wheel this season,” said Niece. “He’s extremely passionate about NASCAR and committed to working with us to have the best run possible in Las Vegas.”

NASCAR: Once Recovered, Travis Pastrana to Focus on NASCAR