Dale Earnhardt Jr.’s No. 88 Chevrolet SS will have a very different look this weekend at Kansas Speedway. The patriotic look is in promotion of a brand new flavor of Mountain Dew, created by JR Nation.

The soda flavor is called DEW-S-A. It was created by PepsiCo after polling NASCAR fans.

Fans were asked how they choose to mix the various Mountain Dew flavors. When the poll was complete, Pepsi went to creating that very mix. 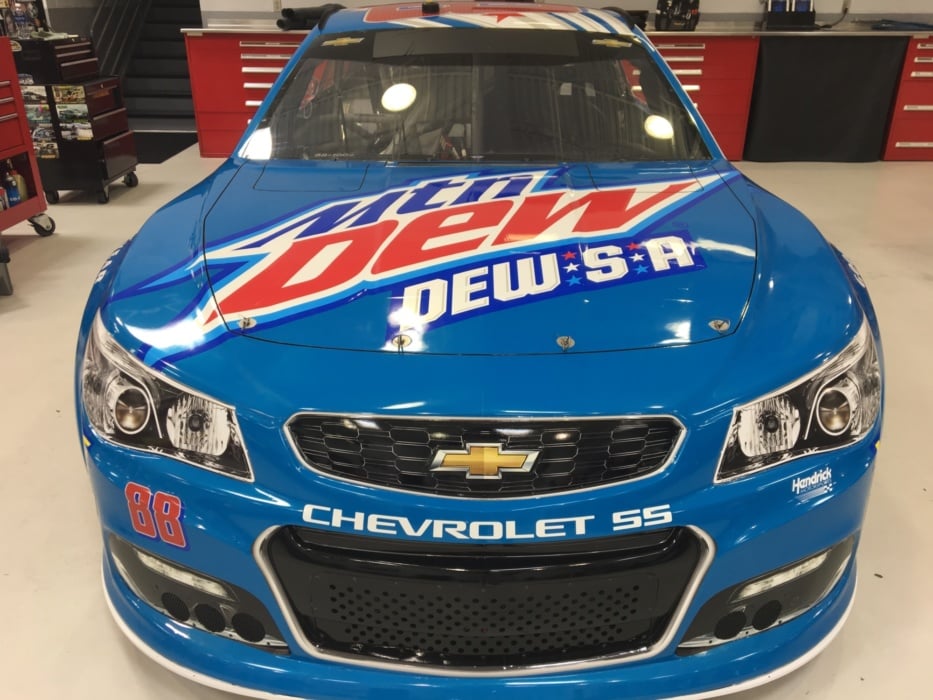 Now, we have some info into the red, white and blue beverage it represents. The new DEW-S-A flavor is a mix of Mtn Dew Code Red, Mtn Dew White Out and Mtn Dew Voltage.

Today, Mountain Dew released a late-night TV infomercial with Earnhardt as the pitchman. It was the debuted of the new drink.

Get ready for a brand new 3-in-1 soda sensation that’s sweeping the nation– Mtn Dew DEW-S-A!

As a nod to DEW Nation, who loves mixing DEW flavors to create one-of-a-kind drink concoctions, Mountain Dew teamed up with decade-long partner Earnhardt to introduce DEW-S-A. a new soda created from a combination of the three fan favorites.

The result of the bold new Mountain Dew DEW-S-A is a united blast of flavor. The drink is, “guaranteed to give DEW Nation a star-spangled way to enjoy summer.”

The humorous infomercial features a very real call-in number – 1-877-DEWSA-88. Fans can call to hear from NASCAR’s 14-time most popular driver. They are also able to purchase the product, while supplies last.

The new Dale Earnhardt Jr MTN Dew paint scheme will be on track for the first time today. Practice at Kansas Speedway begins in just a few moments.

Check out the Dale Jr DEW-S-A video below.

PREV POST
NASCAR Doesn’t Have Control of the NASCAR Schedule