Less than 100 miles separate the 3GT Racing shop in East Lansing, Michigan and Detroit’s Belle Isle Park where the Chevrolet Detroit Belle Isle Grand Prix presented by Lear will take place on Saturday, June 3. It will be the fifth race in this year’s IMSA series for the team’s Lexus RC F GT3 cars, No. 14 and No. 15.

Two of the Lexus cars pilots are from California and two are recent transplants to Michigan. Veteran sportscar legend Scott Pruett and Robert Alon are California natives and their co-pilots, Jack Hawksworth of England, driving with Alon in the No. 15 and Sage Karam of Nazareth, PA, partnered with Pruett in the No. 14, have moved to the mitten state, where they share an apartment in East Lansing, not far from the race shop. 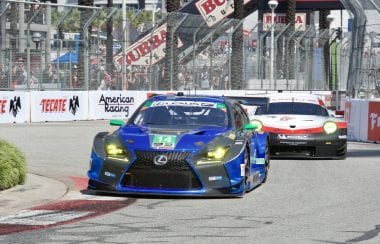 Karam, who finished ninth in the GTD class at Circuit of the Americas in early May, drove in the 101st Indy 500 during his break between the IMSA race in Austin and the June 3 race on Belle Isle. He said he’s happy to get back to his full-time ride with Lexus and 3GT Racing, and particularly happy to get back to Detroit. Karam came up through the open wheel ranks before taking his seat with Lexus and 3GT, and it was during an Indy car race in Detroit in 2015, that he fell in love with Detroit’s street course.

“Yes, the cars are hugely different, the race track is different, but Detroit is definitely one of my favorite and most successful tracks. I’m excited to get there,” he said. “With the strong showing we had at Long Beach, and Detroit reminds me a lot of Long Beach, I think if we keep the pace like we did at Long Beach, we could have a great race.” At Long Beach, the No. 14 Lexus RC F GT3 finished sixth in the GTD class.

Hawksworth also drove in the 2015 Indy car race at Detroit. The two had a rather notorious bump shortly after a restart during lap 46 that year. Hawksworth smiles at the memory, but his focus is the future.

He and co-pilot Alon earned an 11th place finish at Long Beach in the No. 15 Lexus RC F GT3 and a 13th-place at CoTA in Austin, despite earning a second pole position during qualifying. Both are looking for a strong finish at Detroit.

“We proved we have speed in our car,” Hawksworth said, “but a technical inspection put us in the back at the start of the race at CoTA and I had an incident that earned a drive-through penalty, and that prevented us from having the ending we all wanted. I’m confident that if we have no issues in Detroit, we have a great chance to get the result we all want.

Paul Gentilozzi, 3GT Racing Managing Partner said the team continues to refine the knowledge they gain at each race with both cars.  “We’re steadily building the program,” he said. “It started out with big steps, now we are focused on optimizing the performance at each race. Dealing with new strategies each time. I’m really proud of the work the team has put into this.”

How to watch the race: Practice and qualifying for the Chevrolet Detroit Belle Isle Grand Prix presented by Lear will be Friday, June 2. Qualifying will be streamed live on IMSA.com with IMSA Radio commentary beginning at 4:50 p.m. (ET).  The green flag will drop at 12:30 p.m. on Saturday, June 3 and the race will be broadcast live by IMSA Radio and live on FS2-TV in the U.S.

Robert Alon, No. 15, Lexus RC F GT3: “I raced at Detroit with PC last year. It was fun, bumpy but I liked it. I’m looking forward to our Lexus there. Our car was pretty strong in Long Beach and that’s the only other street course we’ve been on. I think if we do our jobs well, earn no penalties and have good pit stops, we’ll do well.”

Scott Pruett, No. 14, Lexus RC F GT3: “I’ve always liked Detroit. I’ve won a lot in Detroit and got my first Indy car pole there in 1995. It will be great to be so close to 3GT Racing and we have our primary car sponsor, Mark Levinson Luxury Audio (in Novi) in our backyard there. It’s going to be great to be back in the Motor City. It’s is a great place to keep building on the momentum we have.”