Qualifying
Shannon Babb circled the 1/5 mile speedway in 10.367. Over a full two tenths of a second quicker than 2nd quickest Brent Larson.

Heat 1
Shannon Babb and Brandon Sheppard setup row 1 in the first heat race of the night. They run side-by-side into turn 1, turn 2, turn 3 and turn 4.

Still even. Brandon Sheppard catches the cushion and the power early. He beats Babb off the corner. Clear race track.

Caution. Bobby Pierce is in trouble. I missed it but the LOLMDS official is pulling on fenders. Pierce had no power. He’s won 2 of the last 3 Lucas Dirt races here. 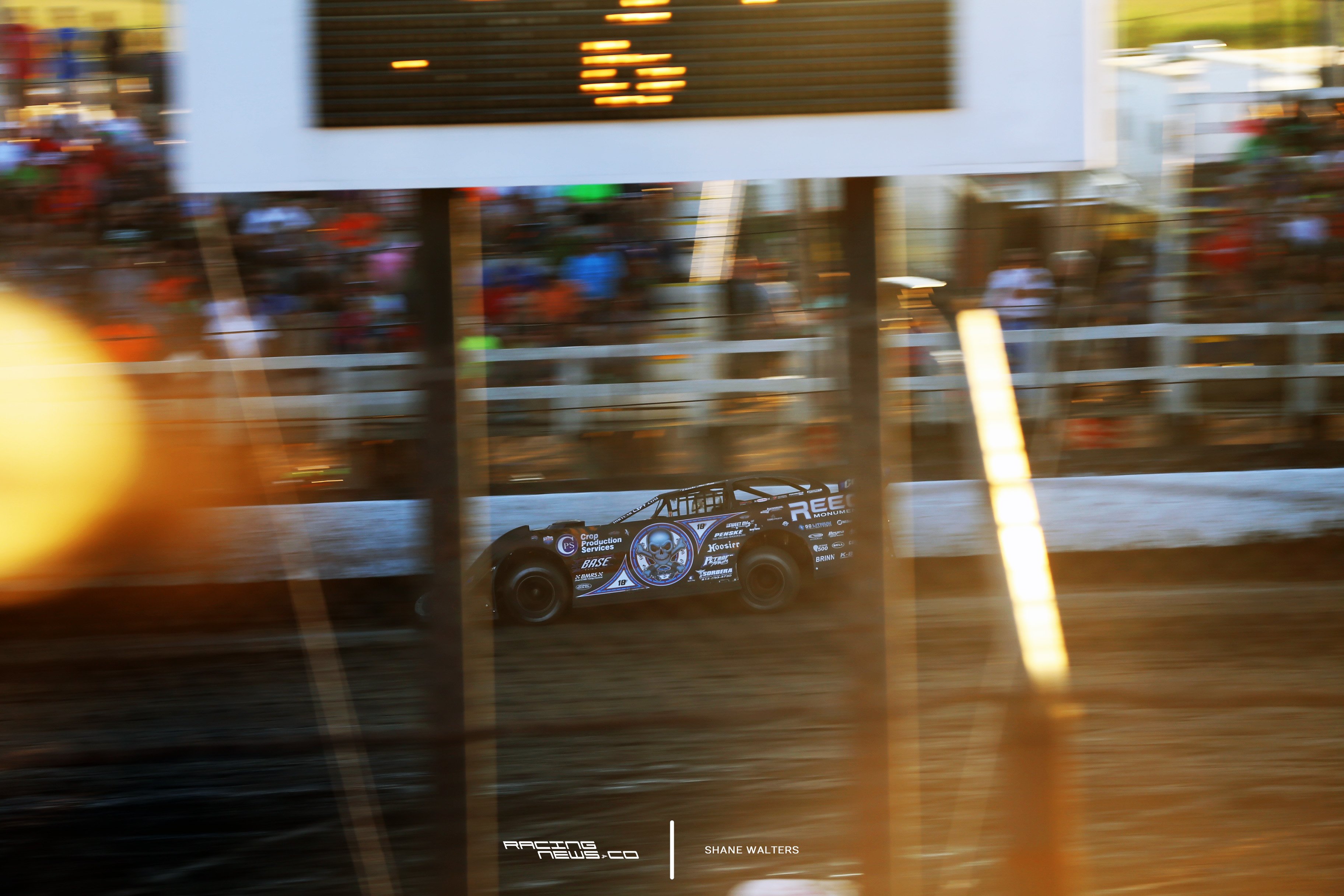 Heat 2
Brent Larson and Scott Bloomquist lead the field to green in heat race number 2. Bloomquist takes the lead on the high side in turn 2. 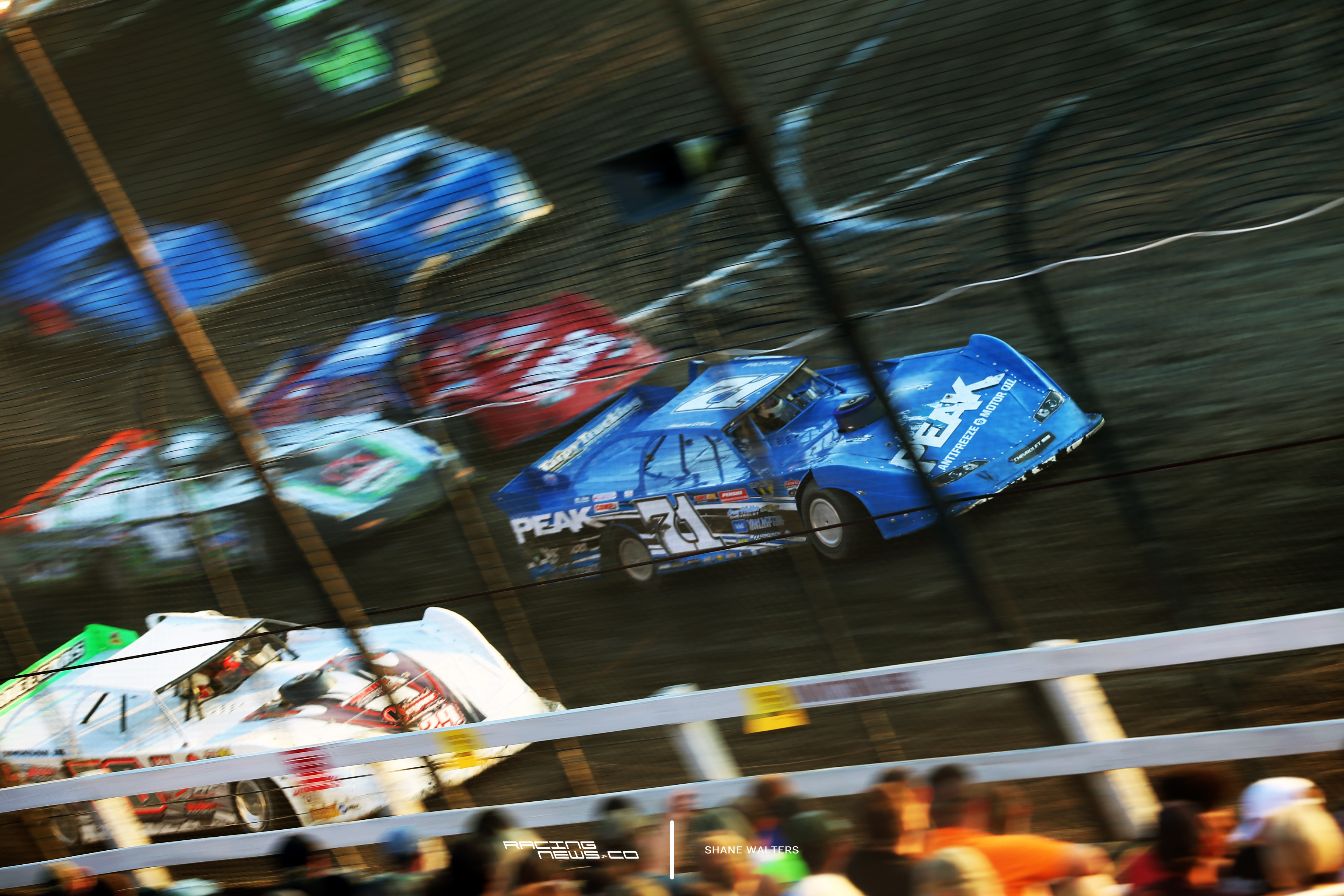 Heat 3
Hudson O’Neal and Tony Jackson Jr set row 1 in the final heat race of the night. Hudson O’Neal carries it to the lead off turn 2.

Jackson Jr drives it deep on the bottom in 3-4. He slides right in front of O’Neal. The #71 stomps the brakes, rotates, nearly roles on two wheels. Back on the gas, he drives down the banking. He’s back under Jackson in turn 1.

Hudson O’Neal is back in the lead. He drives away and wins the final heat race of the night.

No B-Main’s tonight. All 25 cars will start the feature event at Macon Speedway.

Main Event
100 laps around the bullring at Macon Speedway. At 10 seconds per lap, it will be over quick. 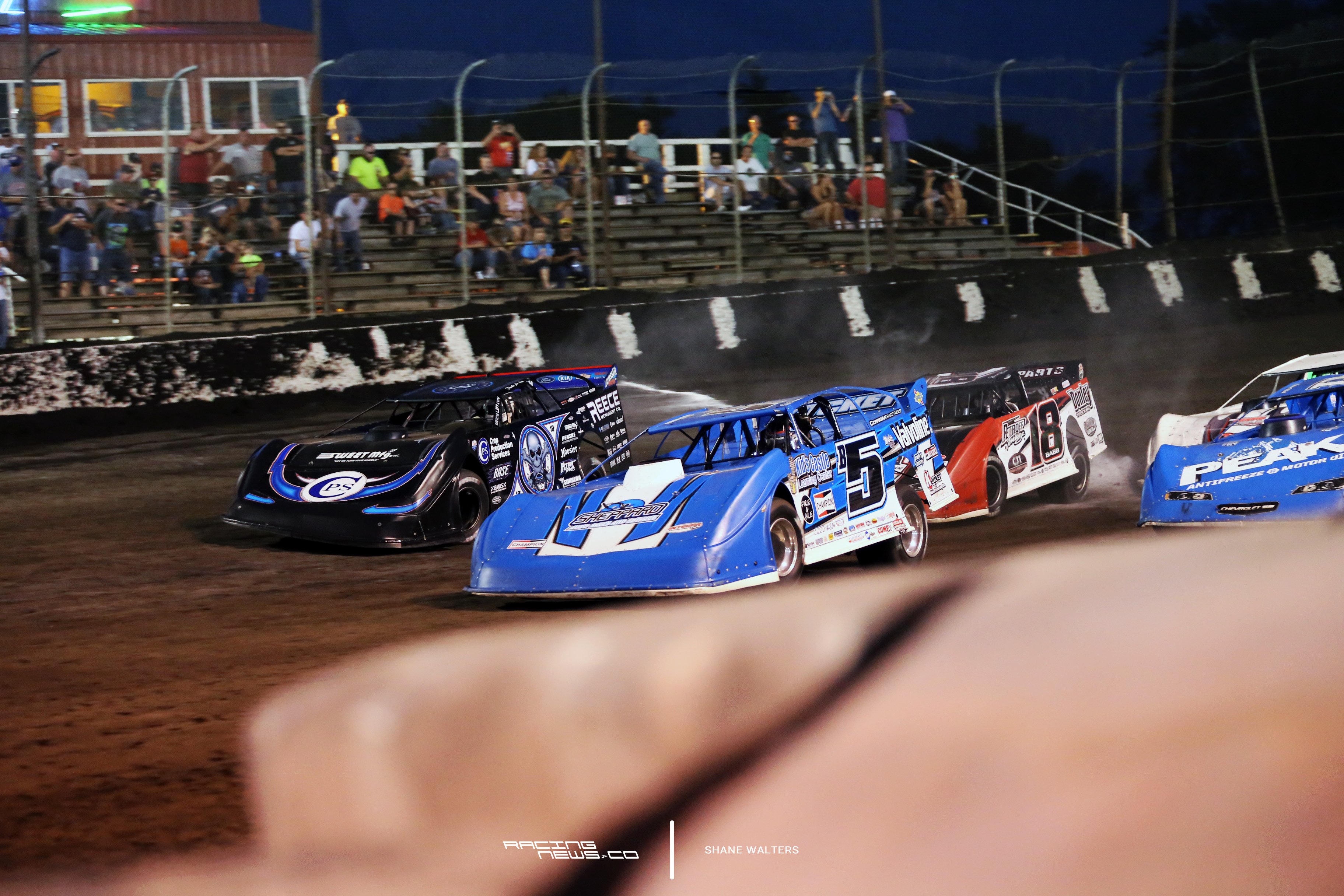 Brandon Sheppard and Scott Bloomquist lead the field to green. Bloomquist takes the lead in turn 1 on the outside.

Green. Shannon Babb is around Sheppard. It’s a repeat of the Gateway Dirt Nationals. On a track identical.

Bloomquist and Babb run the bottom. But they’ll be deep in lapped traffic, in no time. Lap cars on the bottom, Bloomquist goes high. He picks the first one off, many more to come.

Green. Sheppard drives it hard into turn 1. He bounces it off the cushion, to the power and around Shannon Babb. Now Sheppard is after the lead. He tries it again in 1. Too hard, the car didn’t want to rotate.  He has to get out of the gas. Babb pulls even but Sheppard pulls back around in 3.

Lap 31, caution. Boom Briggs is around.

Green. Same thing for Sheppard. He slams the cushion so hard that the car jumps to the right. Babb and Richards are both around. Caution. He’ll get those spots back. Still lap 31. 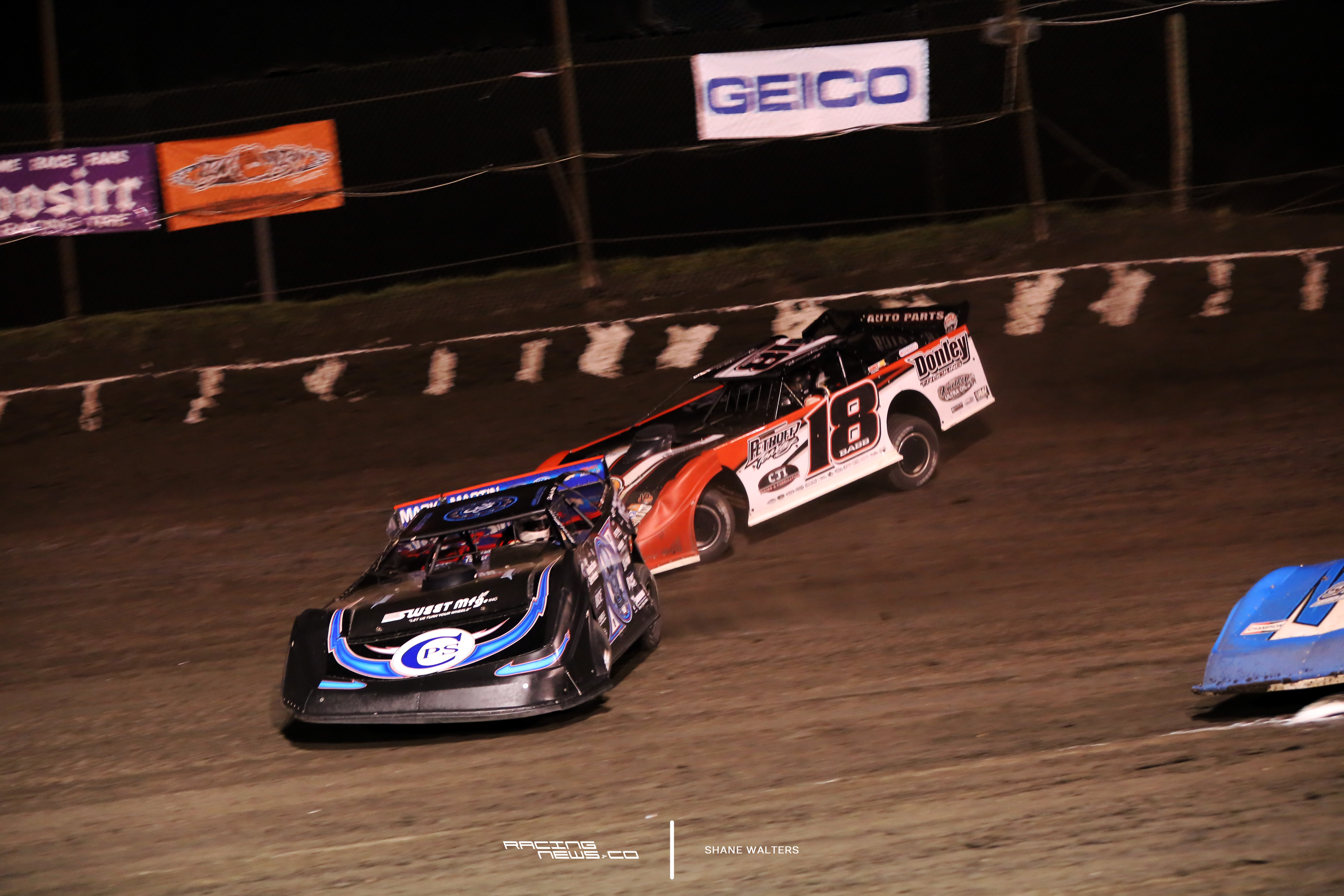 Green. Bloomquist spins his tires down the front straight. Shannon Babb gives Scott Bloomquist the bumper in turn 2. A replay in reverse of the bump at the Gateway Dirt Nationals. Light contact on corner entry but it gets Bloomquist completely sideways. Bloomquist has to lift off the throttle completely, he falls back to 7th. Babb leads! Tim McCreadie got turned in the stack up of that mess as well. No caution.

Caution, lap 37. Bloomquist and Erb to the pits. The are both back out.

The leader has knocked off the right side of his rear spoiler. 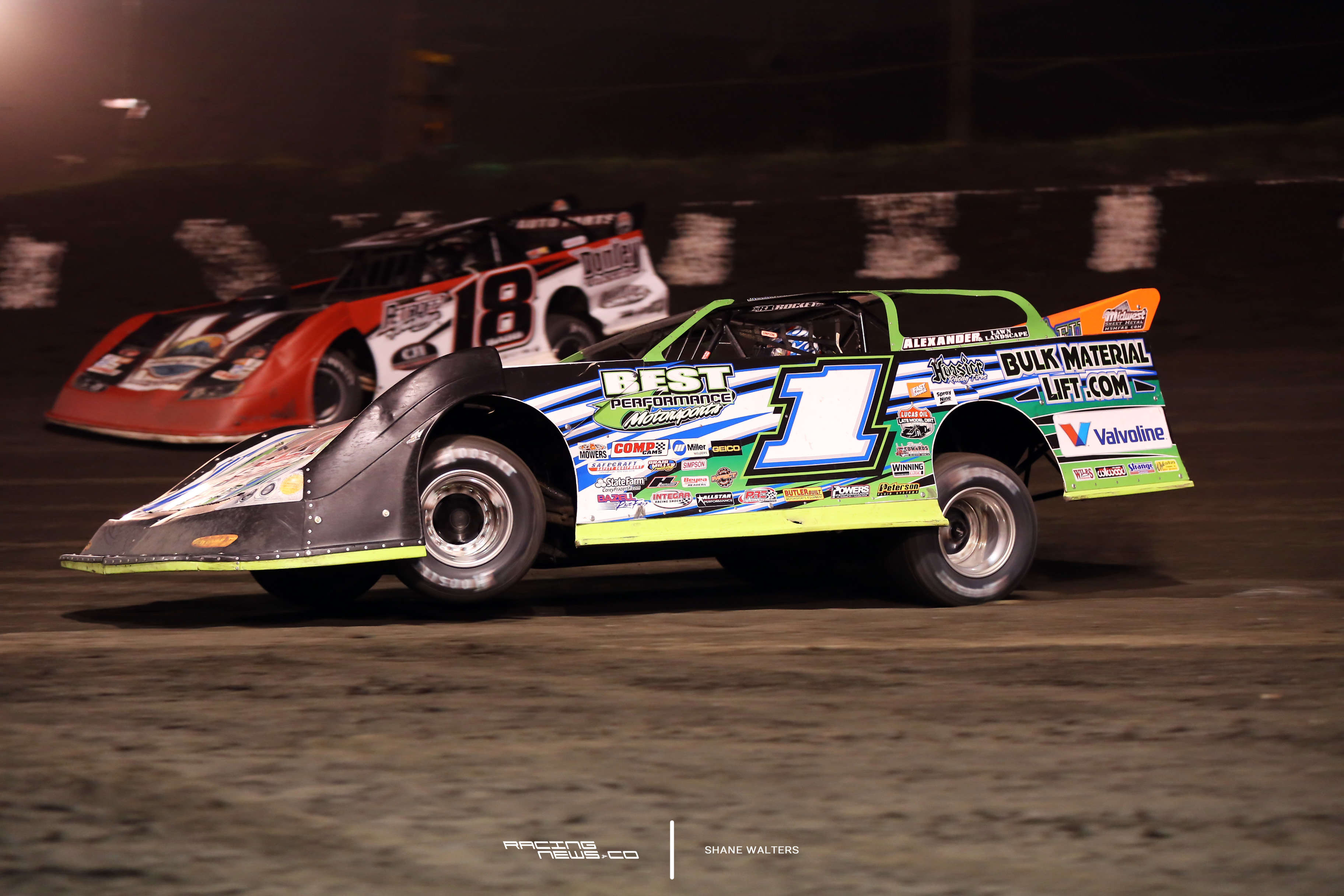 Green. Josh Richards is clicking off fast laps on the bottom. Babb bouncing off the wall on the top. Inch by inch, Richards is nearly clear. A mistake by Babb, Richards to the lead. 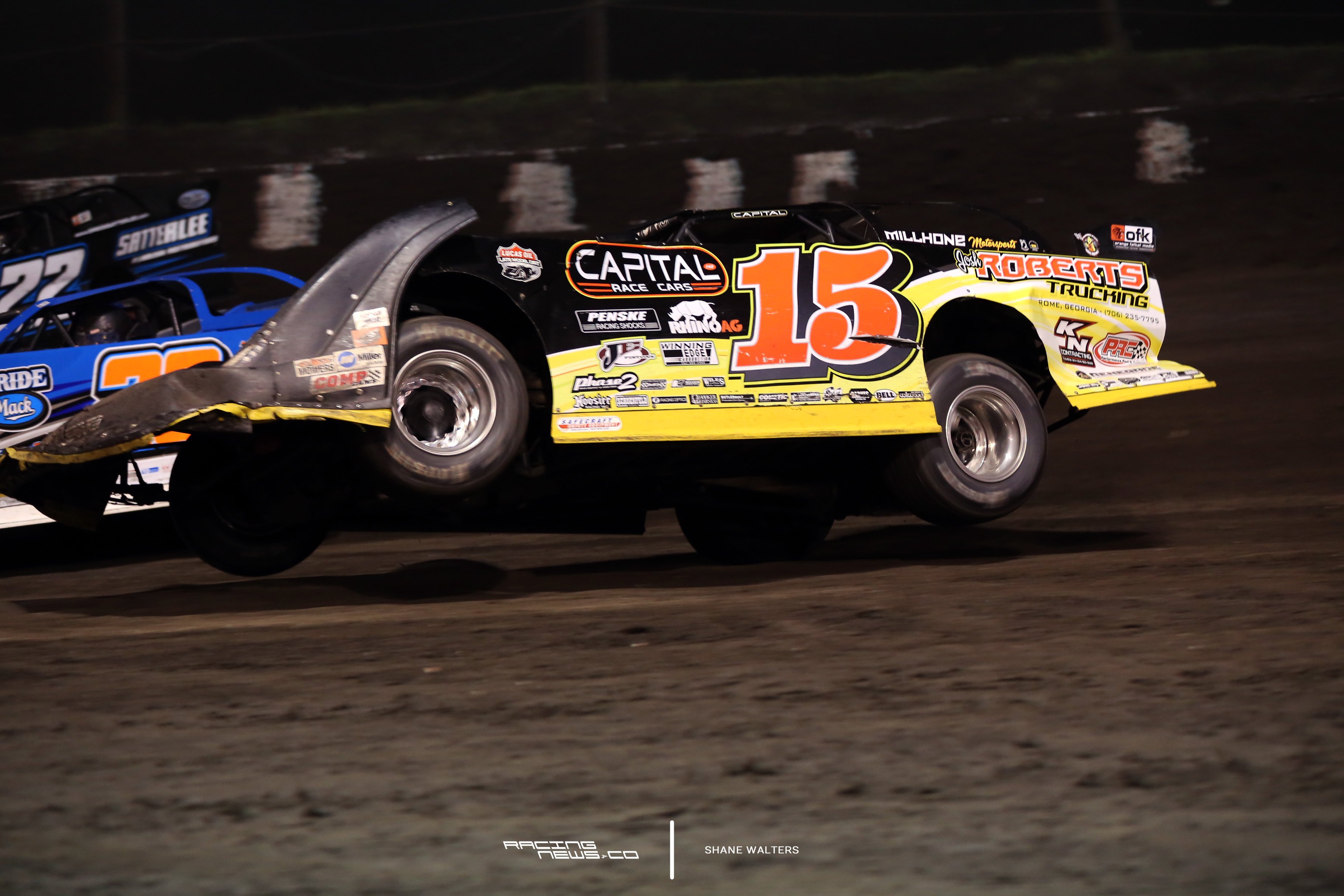 Most drivers that are running the bottom are flirting with the inside tire barrier. They roll over it and launch in the air as they set their car for exit.

Lap 68, caution. Gregg Satterlee threw it in to hard in turn 1. He slammed the cushion and the engine revved. Probably a broken gear. 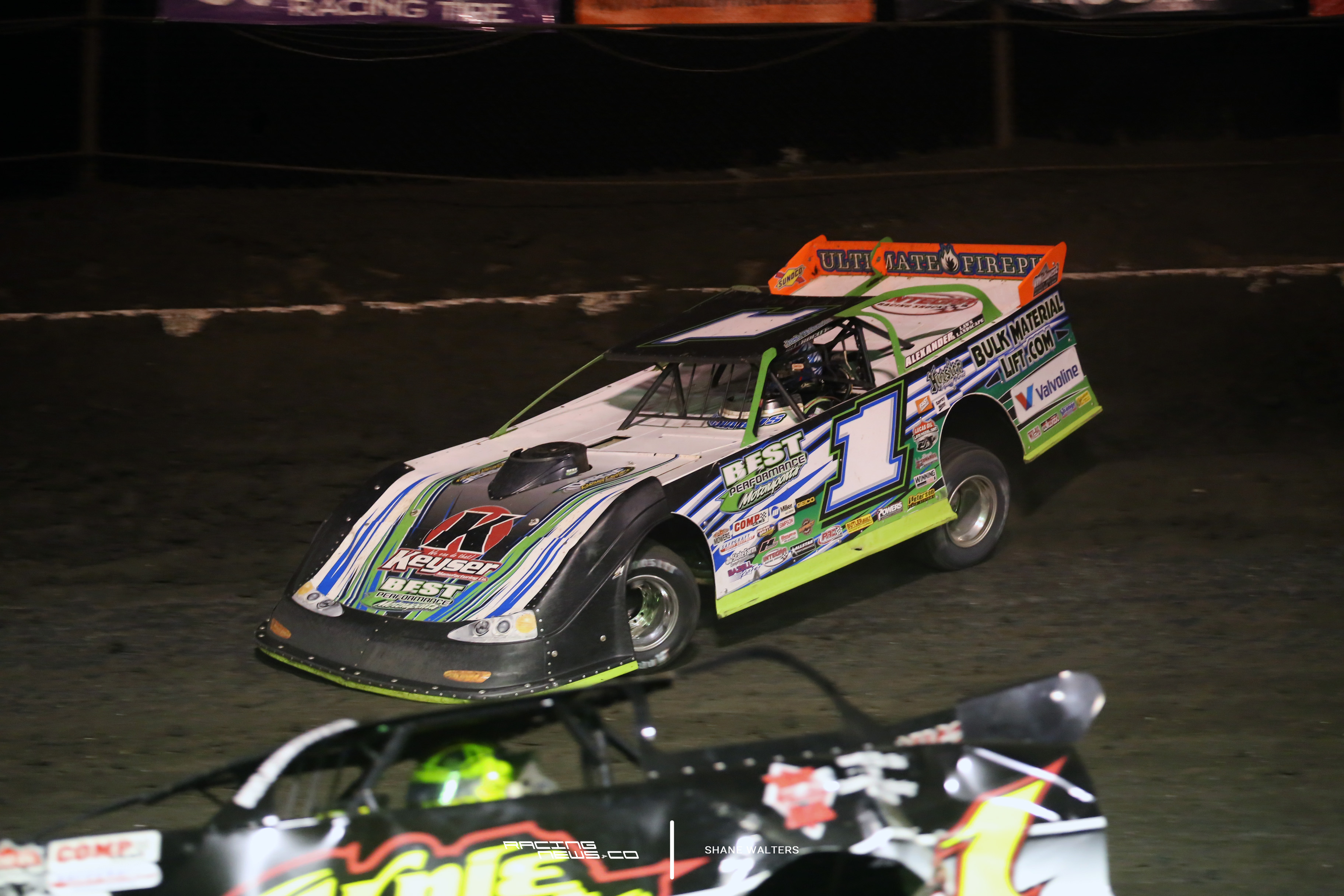 20 to go, Richards is deep in lappers. He’s forced to go high. Babb has a window of opportunity down low. He takes it and pulls even with Richards. But Babb hits the same road block.

Richards has a clear land up top. He clears Babb. Babb follows in line.

1 to go, Bobby Pierce is around. He’d been battling hard with Jason Feger. It looked like Feger returned a bumper. Caution.

1 lap shootout, Josh Richards gets a huge jump. 10 seconds after the green, he’s at the finish. Josh Richards wins at Macon Speedway!