Tonight, the show gets underway. They call it the North South Shootout. 67 dirt late models have unloaded in the pits.

Gregg Satterlee got into the wall, dinging the right rear spoiler. He coasted it across the line. Steve Casebolt also tagged the wall.

Hudson O’Neal has been hot lately, he sets overall quick time. Darrell Lanigan was quickest in group B.

Hudson O’Neal and Josh Richards set the first row of the night. Green, even at the flag. 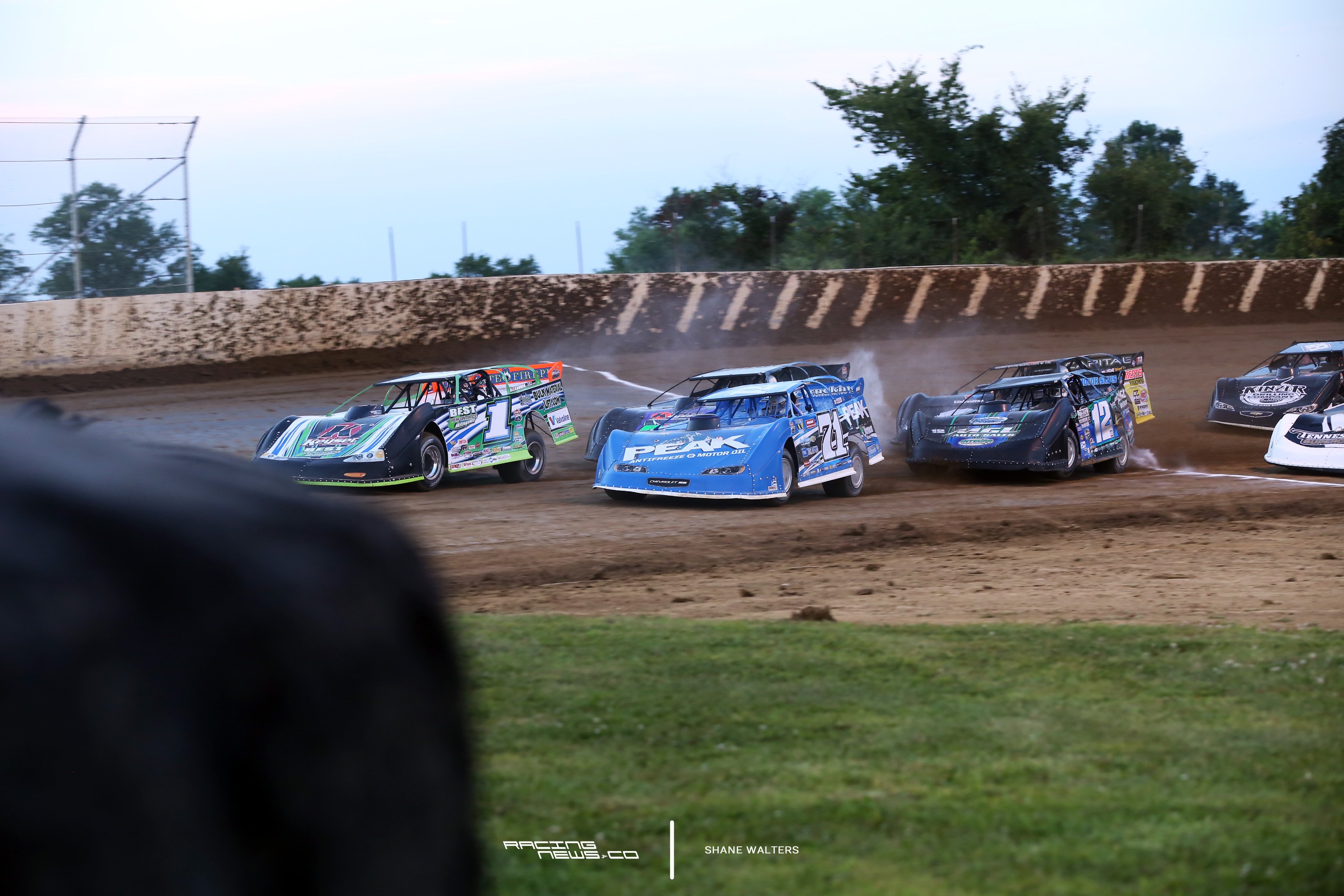 O’Neal takes the lead on the bottom in turn 1. Steve Francis is scraping the wall out of turn 2. The field stacks up and Billy Green goes around. Jason Jameson has a flat. Caution.

Green, O’Neal leads into 1. This time he goes high. Richards stays low in turn 1. Lap after lap, Richards pulls even with O’Neal in 1 and 2. They both run low in 3-4.

O’Neal drops to the bottom. Richards tries high. He has a shot on the high side with 1 to go, slips out of 4. O’Neal wins the first heat of the night. 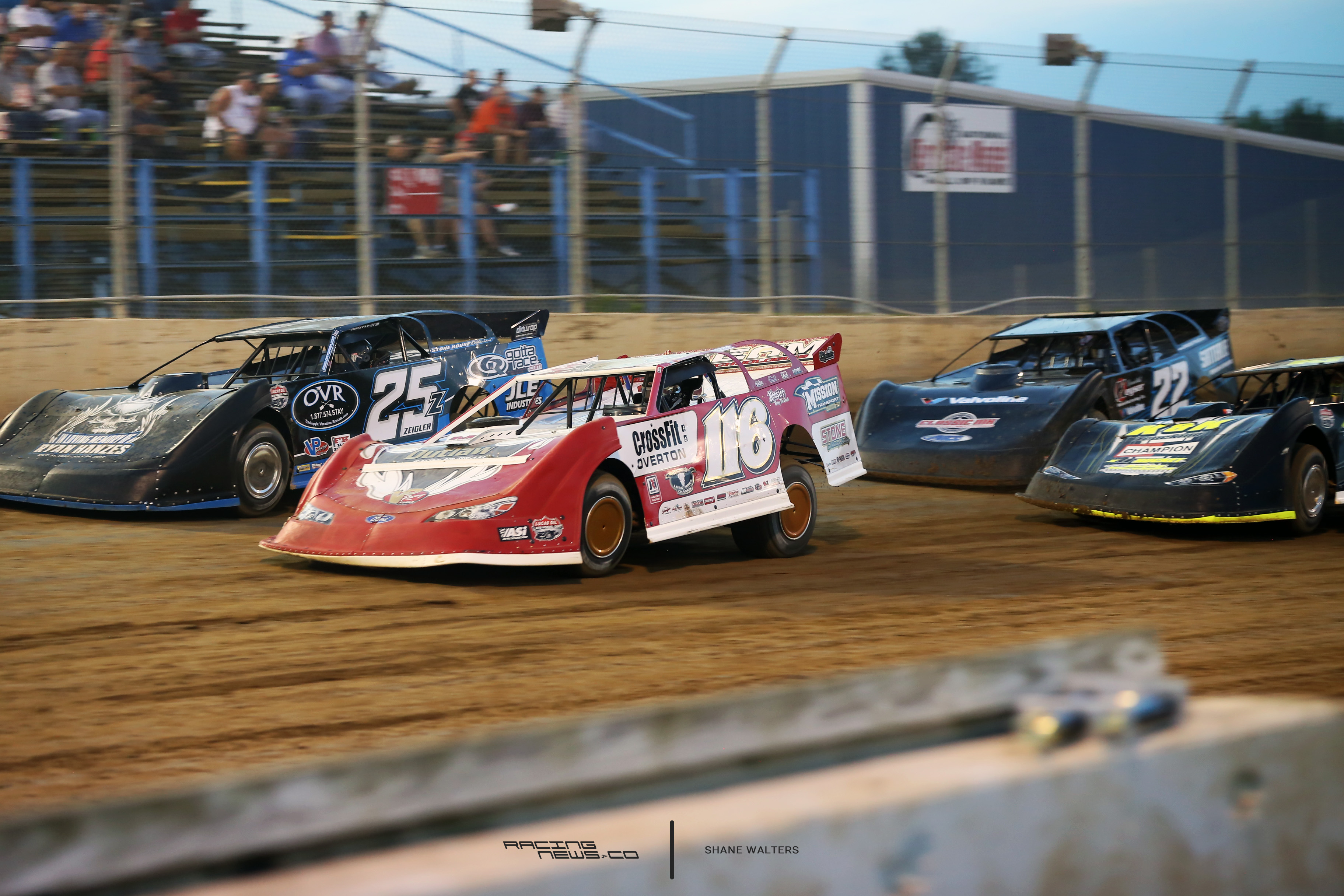 Mason Zeigler scraps the wall out of turn 2, still on the throttle he moves into 2nd.

Zeigler starts dropping. Don O’Neal looks low in 3-4. He slides up on exit, Zeigler still there. Zeigler bounces off the wall. He comes back into traffic, doors Satterlee. They all continue but drop through the field.

Overton is gone. He wins heat 2.

Jimmy Owens and Dale McDowell lead them to green. Point leader, Scott Bloomquist is buried on the starting grid, he rolls 7th. The leaders fight for space on the bottom. Mike Marlar picks the open lane. On the top he looks to jump from 3rd to first. Caution, spinner.

Owens checks out. Marlar makes it work on the high side. Bobby Pierce is also making the top work. They fight for 2nd but maintain positions as Owens takes the win. 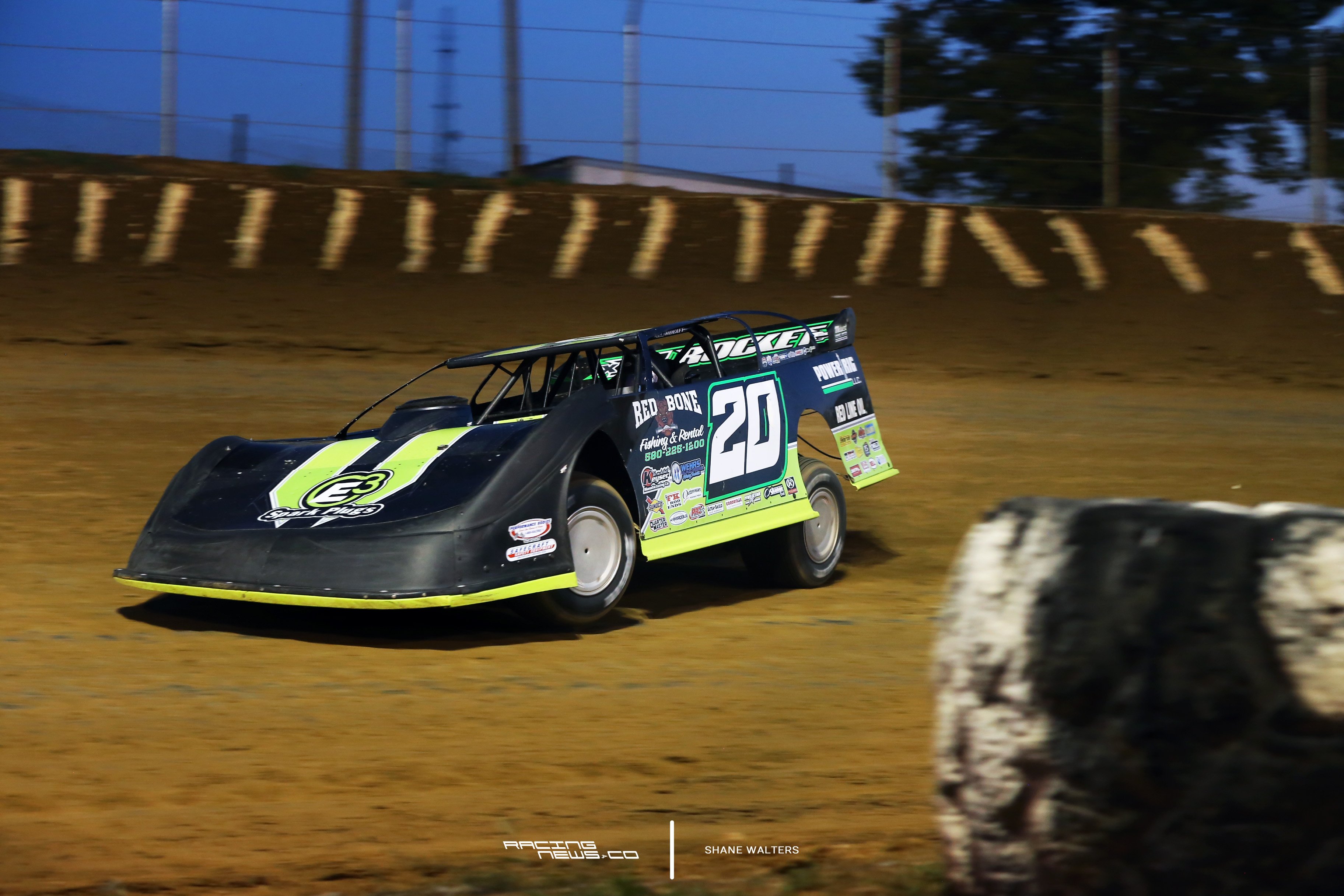 Darrell Lanigan and Billy Moyer Jr line up first. Lanigan leads the field into turn 1. Lots of minor contact all over this heat. Bronson has trouble, to the pits. Caution.

Green, Lanigan is gone again. The top 3 spread out as Billy Moyer Jr and Devin Moran battle side by side for 4th.

Lanigan drives to the win. 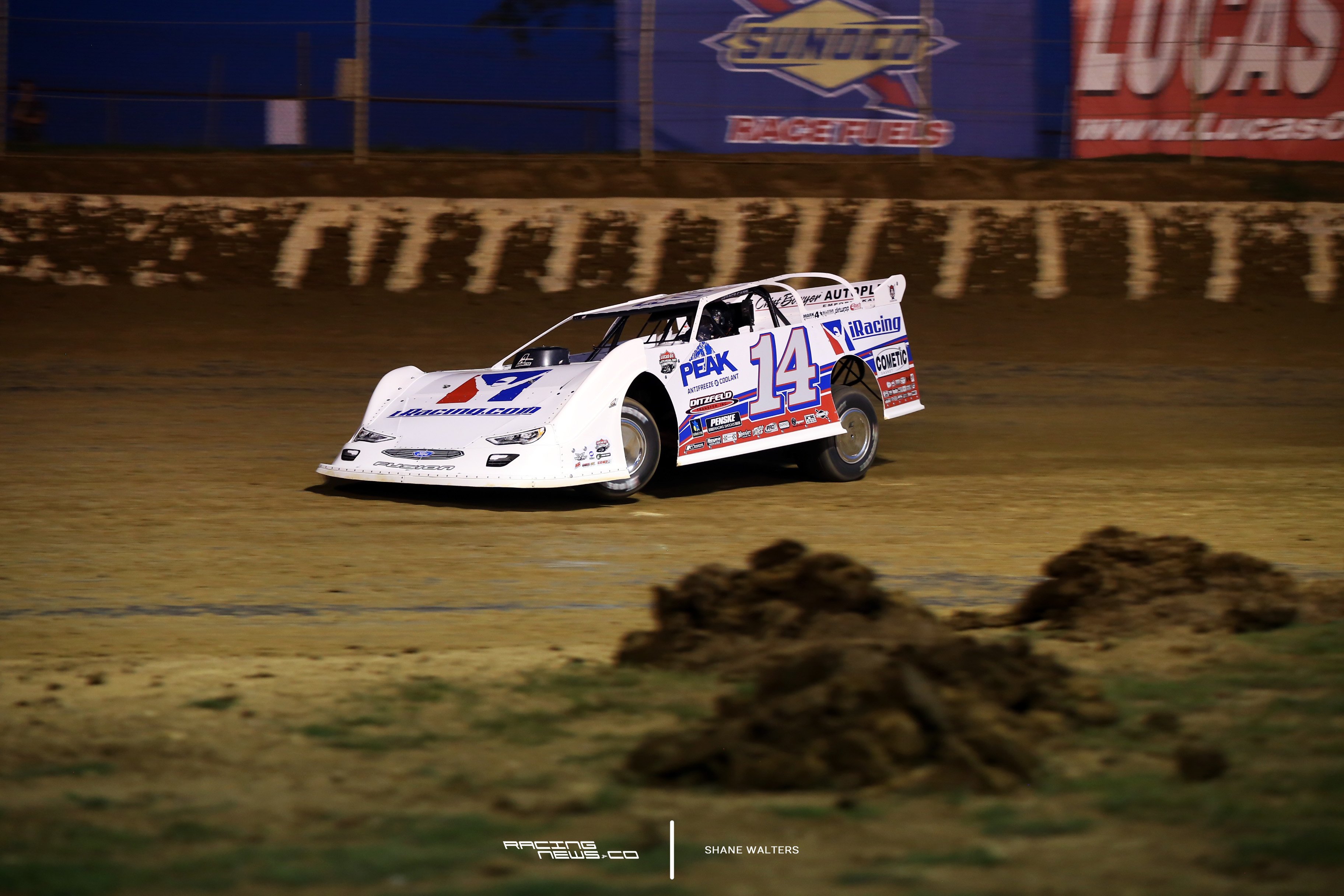 Dustin Nobbe and Tim McCreadie roll out behind the pace truck. McCreadie to the lead, RJ Conley to 2nd. Both did it on the top. Robby Hensley has a flat. Caution.

Green. McCreadie is gone. Dennis Erb Jr is charging hard on the bottom. He’s under Scott James in 3-4. 3rd for Erb.

1 lap to go, James throws it in high, pulls even with Erb. Conley slips in 3-4! He drifts high, blocking James’ line. Erb is under the both of them, he nips Conley at the line for 2nd. McCreadie crossed the line an hour ago, he wins heat 5. 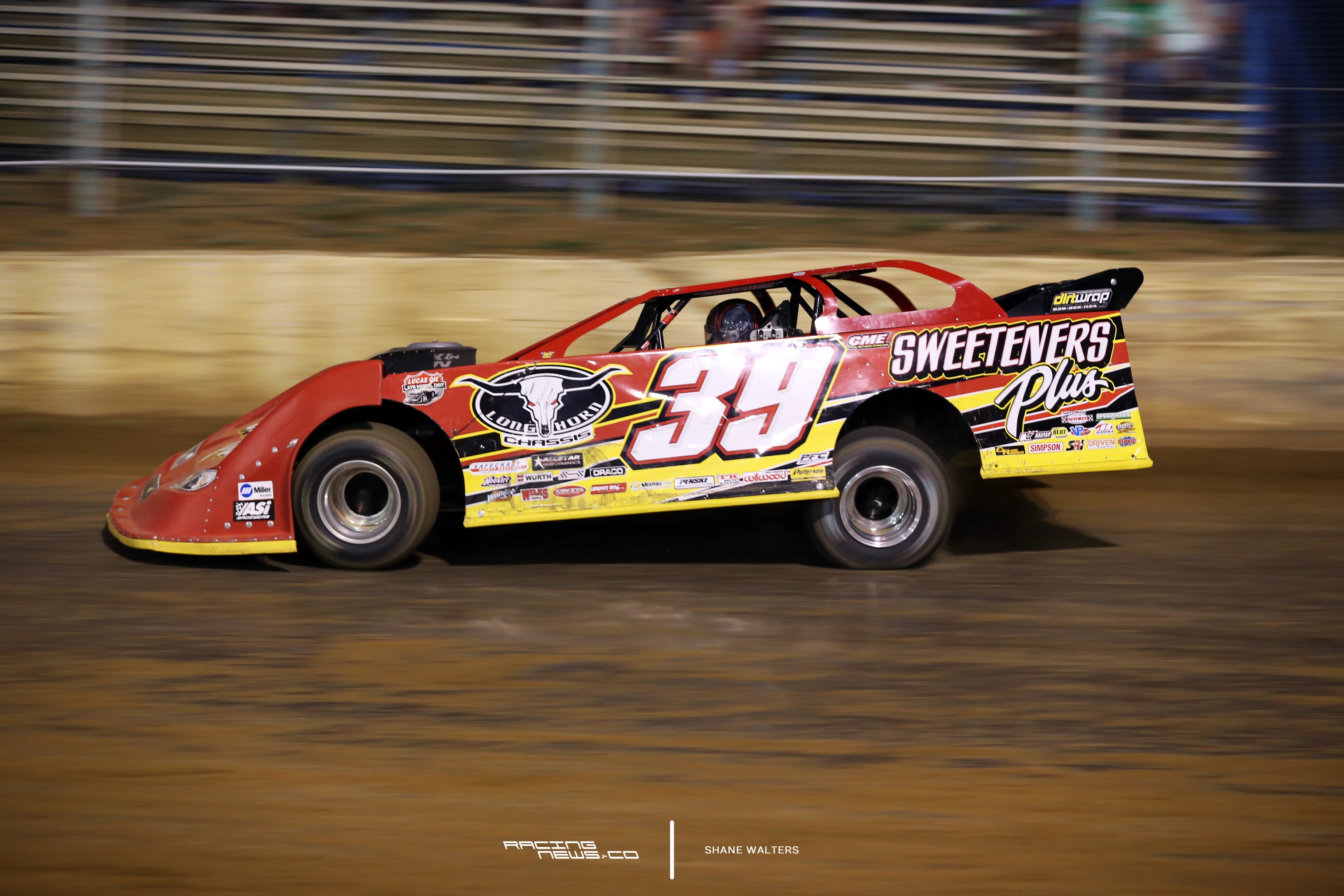 Rick Eckert and Zach Dohm set row 1 in the final heat of the night. Eckert leads in turn 1. 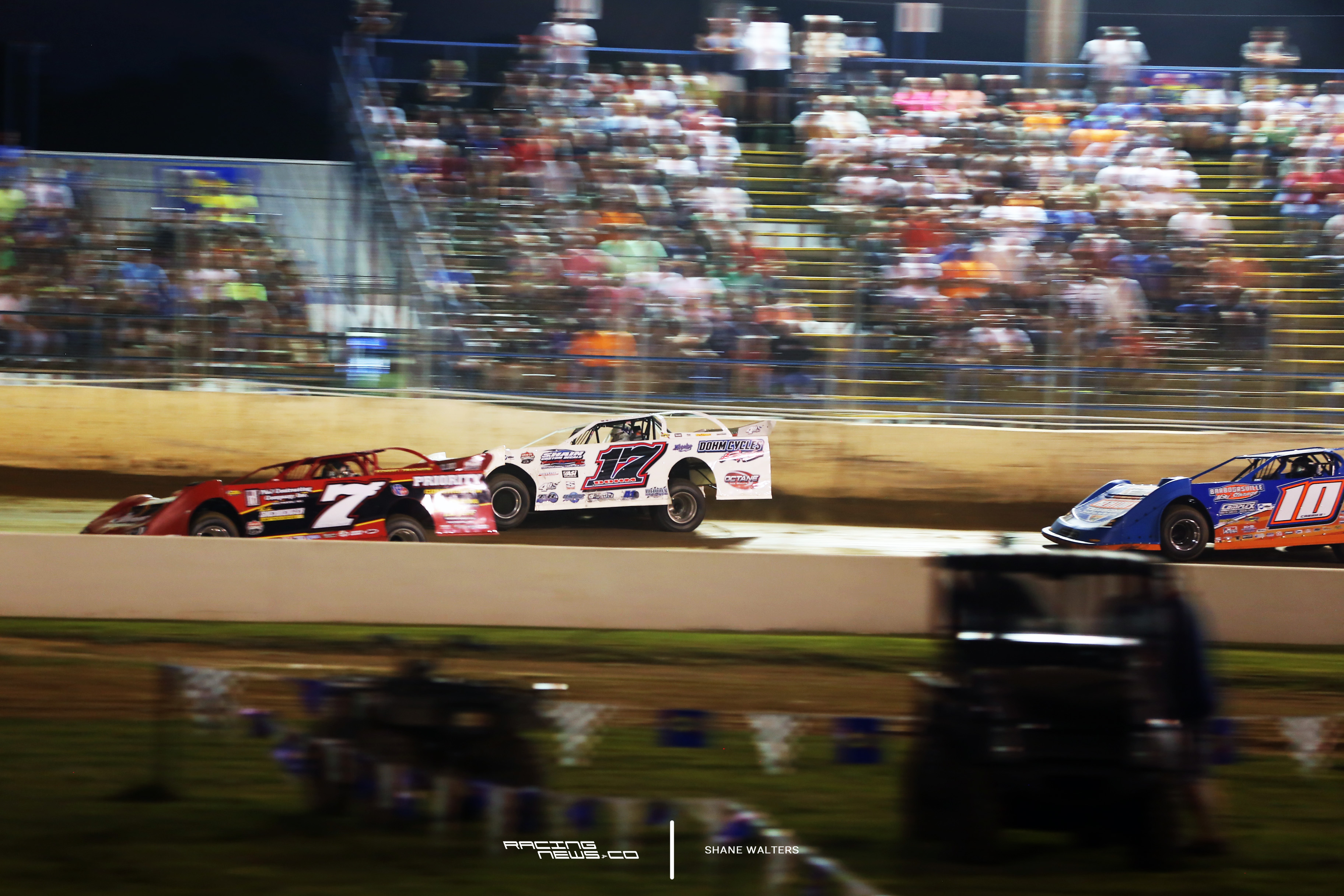 Steve Casebolt slides from the bottom to the top, taking 2nd from Zach Dohm. But, Casebolt has to get out of the gas to avoid the wall out of two. Dohm and Eddie Carrier Jr both get by.

Scott Bloomquist started 6th but he worked his way to the lead in no time. Then he began falling through the field, just as quickly as he got there. 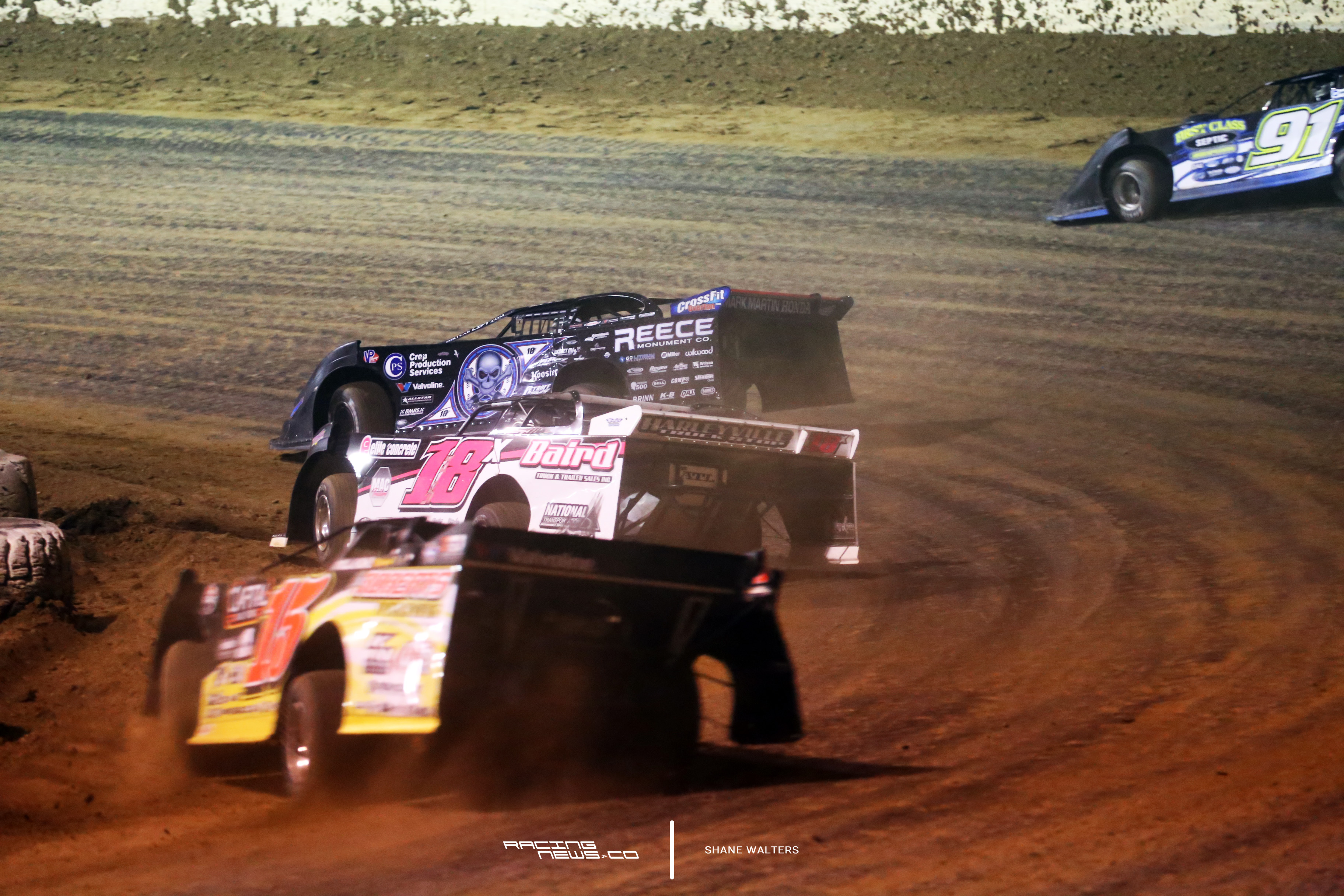 Contact with Buckingham sent the #50 around. Steve Francis has a bit of damage as he squeezed between Buckingham and the wall.

Bloomquist has pulled off. Satterlee is the pits. Tyler Erb is the leader. Green, Erb drives off to the win.

Green. Moran jumps out to the lead. He’s running lower than anyone down the back-straight. James and Moyer Jr run side by side for 2nd, James wins that battle as Moran takes the win. 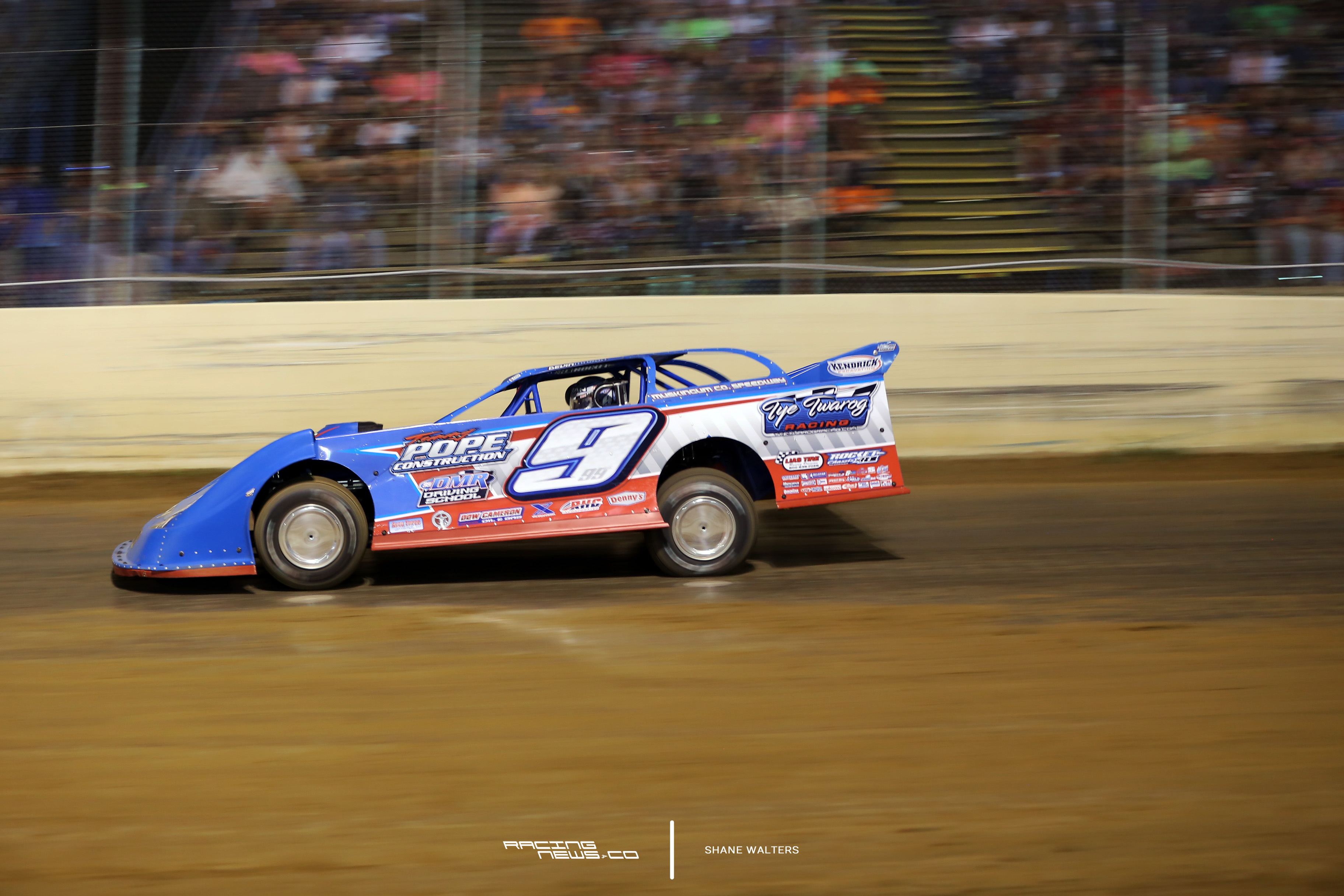 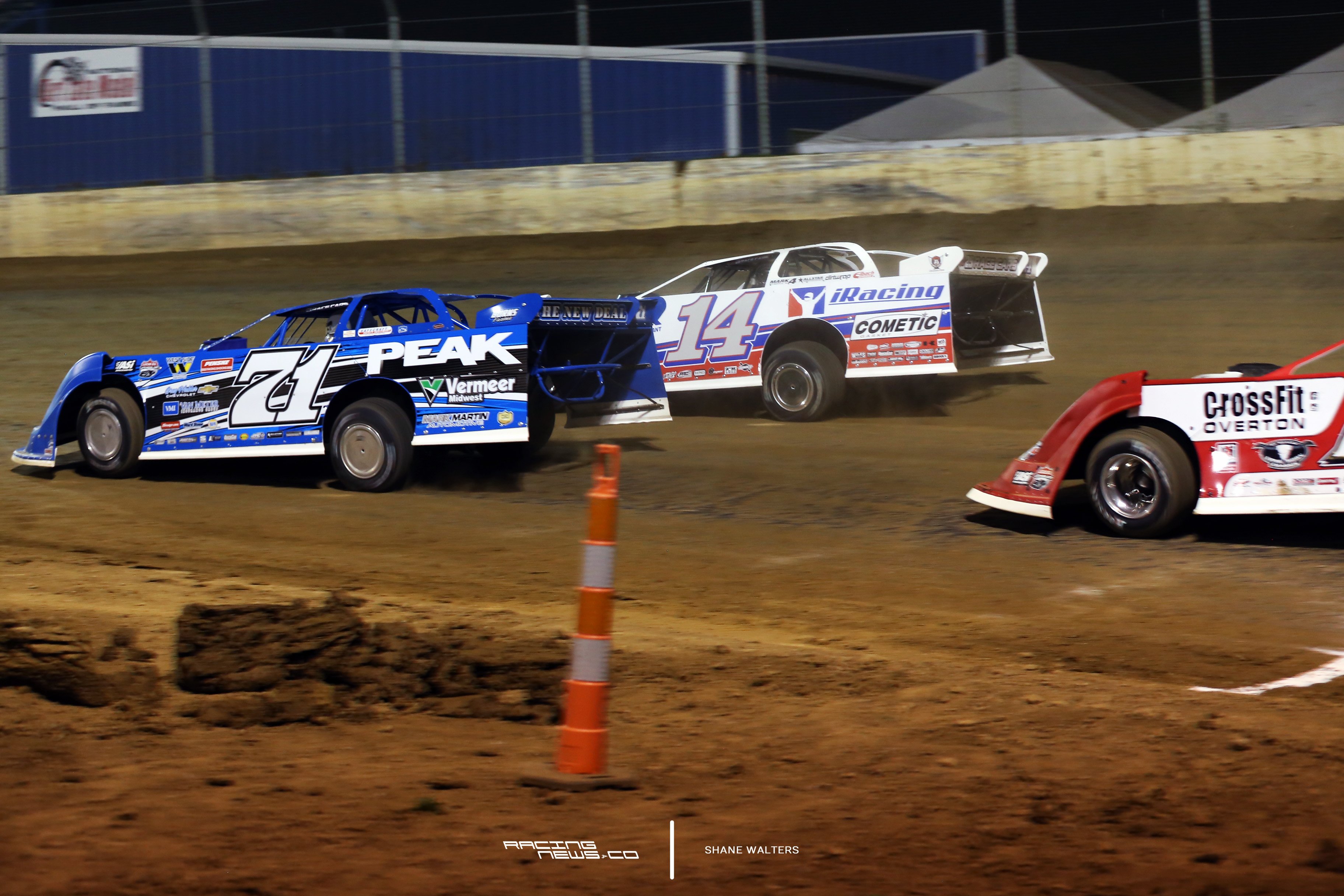 Hudson O’Neal and Darrell Lanigan lead the field to the start. Green flag. Lanigan to the top and to the lead. He stays there as Owens goes to the bottom. 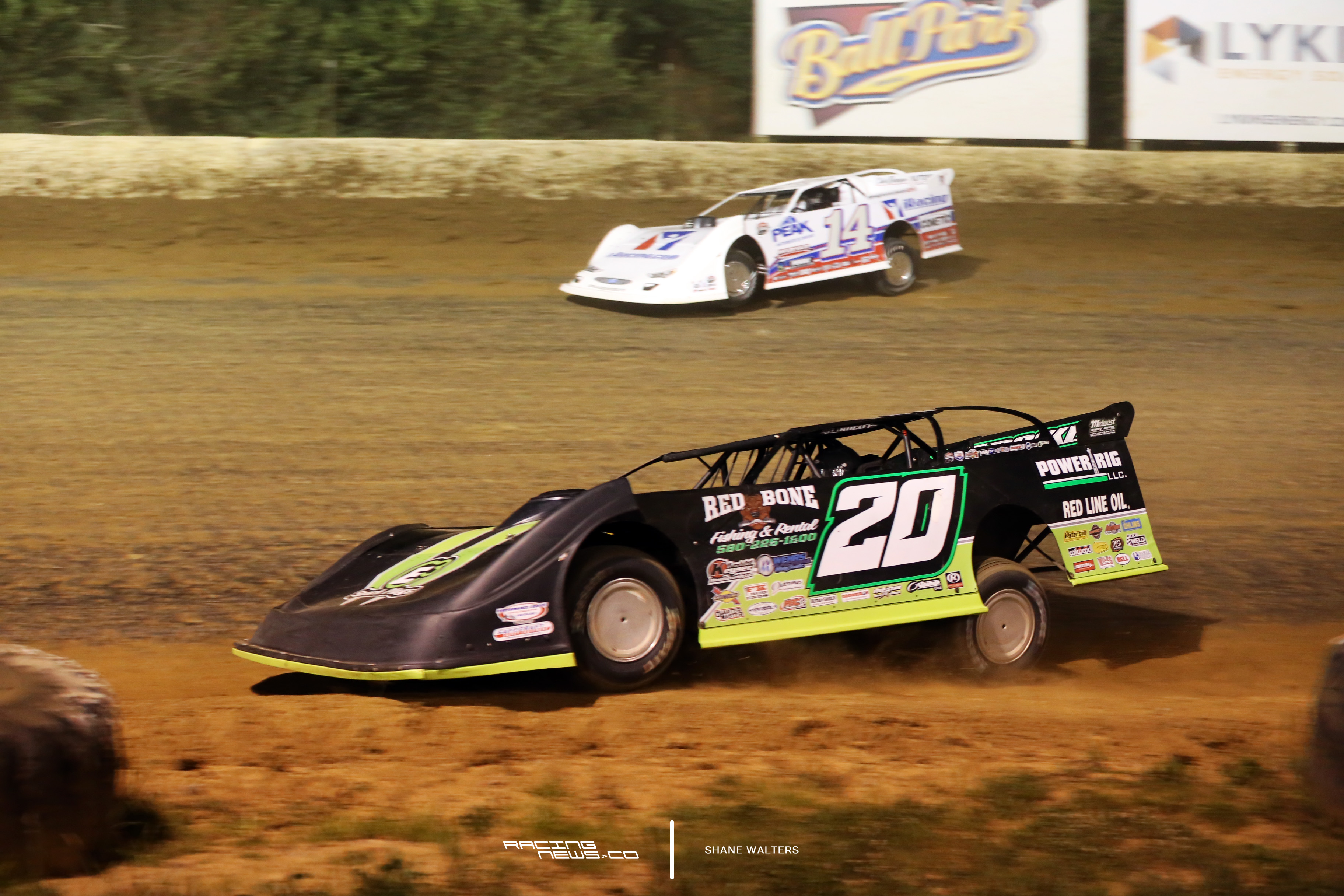 He’s there. Owens to the lead by a few feet. Lanigan fights back. They swap again. 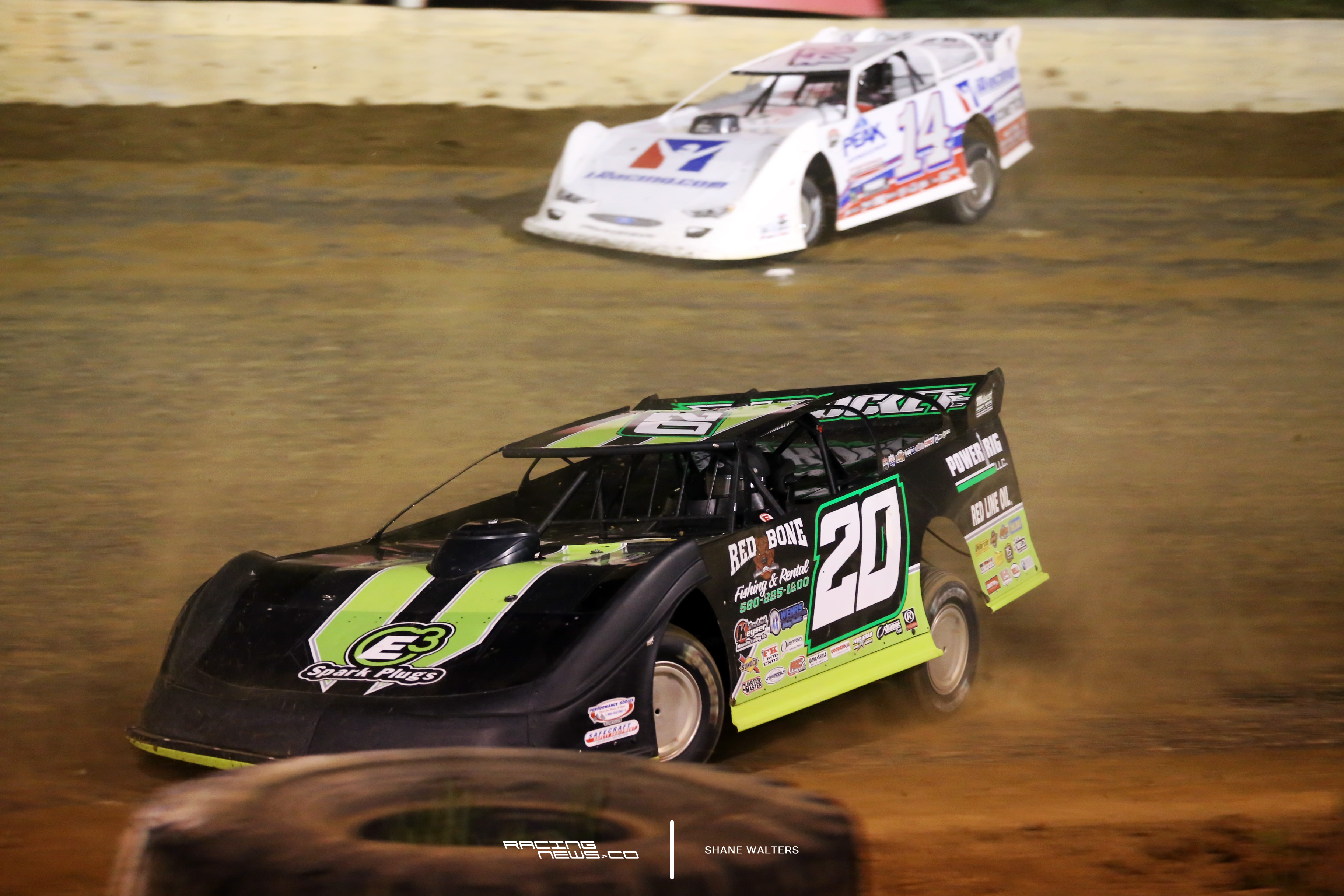 Owens to the bottom one more time in turns 3-4. He gets it done, new leader, Jimmy Owens.

They’ve caught lapped traffic. Owens gets hung up. Lanigan dives from the top to the bottom on the exit of 4. He’s under Owens in turn 1. Contact possibly, big slid from Lanigan. Lanigan falls to 3rd Hudson O’Neal to 2nd.

Lap 37, Owens can’t get around Bloomquist. Hudson O’Neal, Darrell Lanigan and Tim McCreadie are nose to tail catching him. Lanigan slides O’Neal for 2nd, Tim McCreadie does the same. 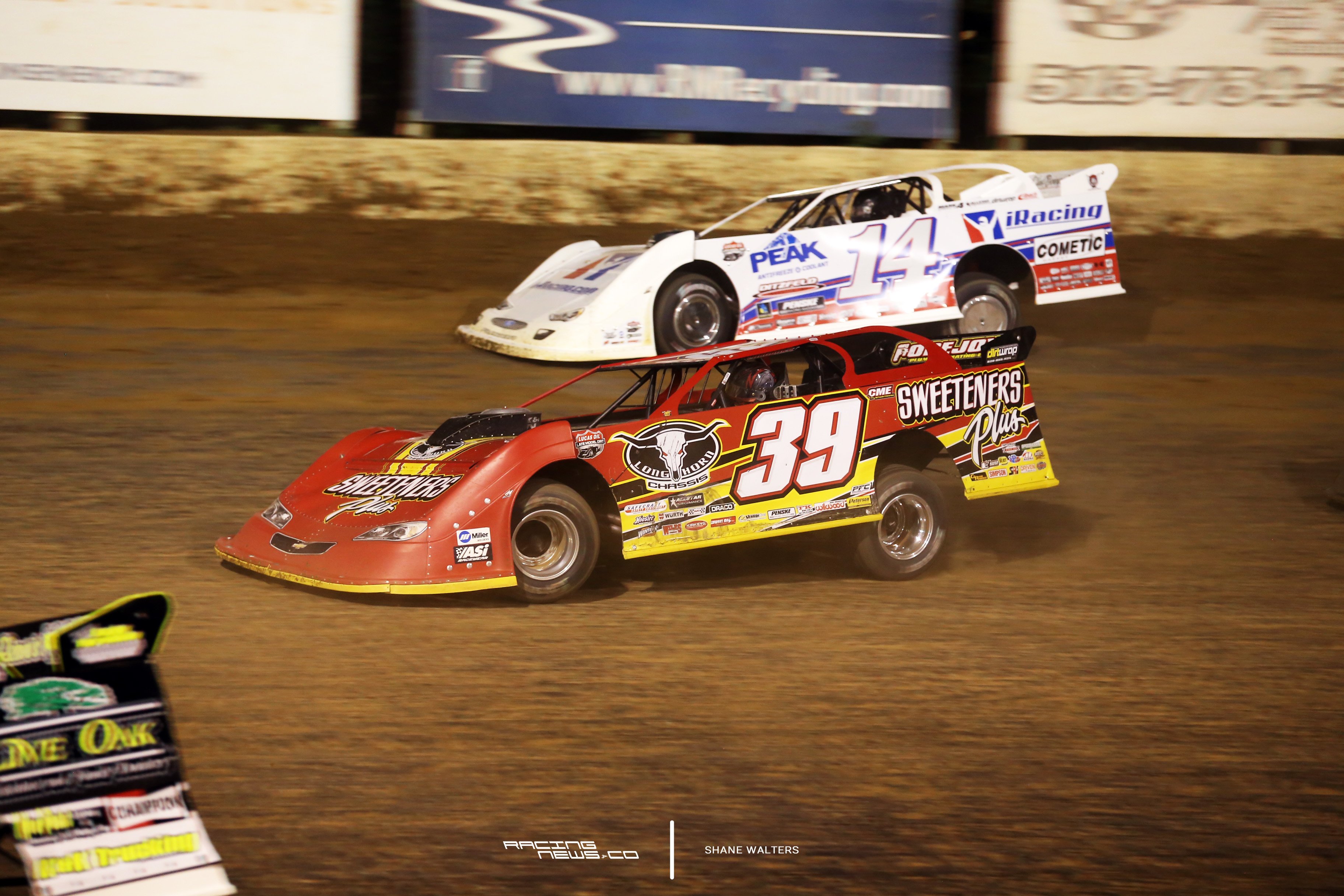 5 to go, all 4 glued to the top and nose to tail. They’ve used up almost of the cushion, hardly anything left. 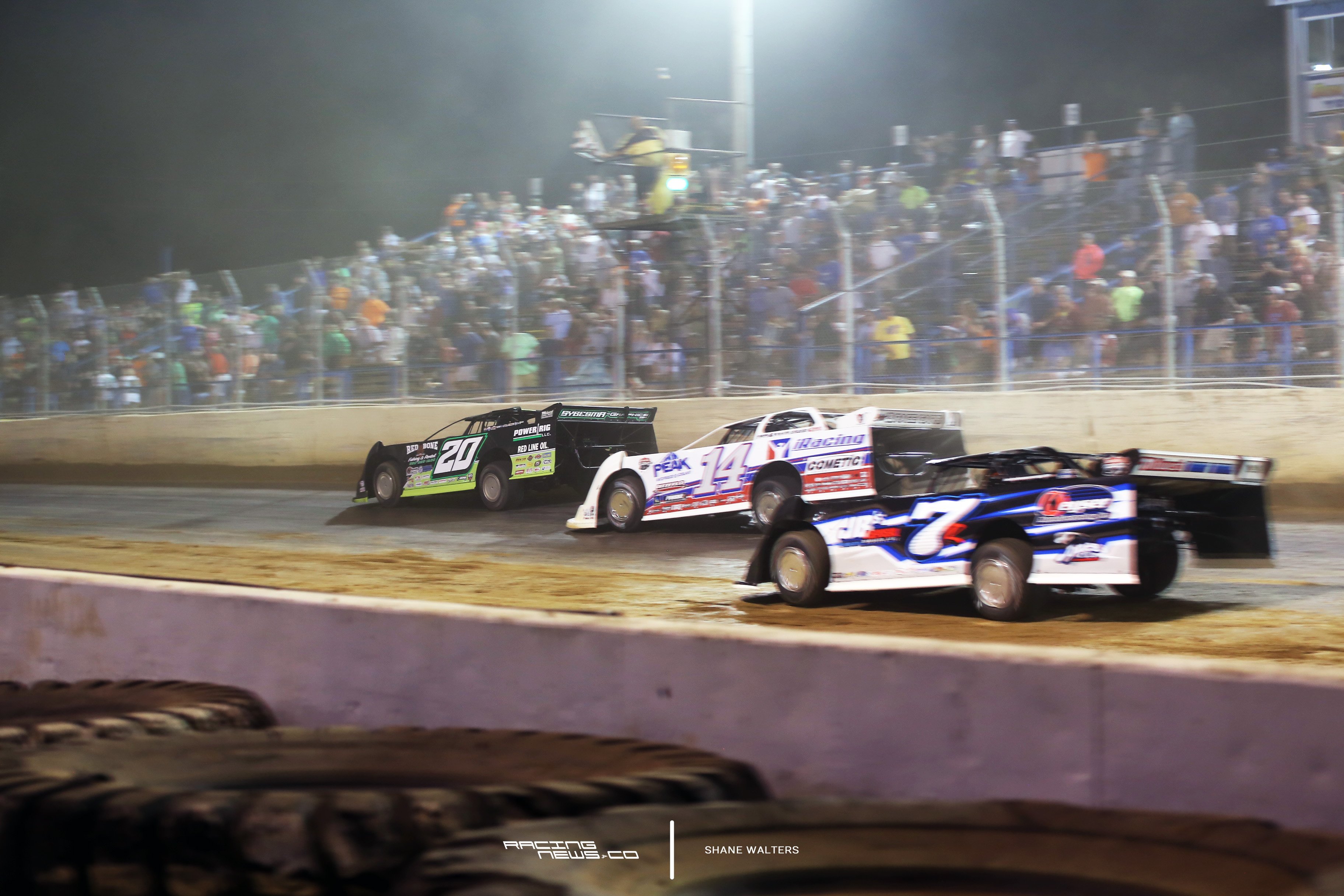 Jimmy Owens
The 2017 North South Shootout winner speaks from victory lane, “It was a good show tonight. I was thankful to get the lead on the bottom when I did. The lapped traffic was a bear. I had a hard time getting around Scott [Bloomquist]. Wherever I went, he went, but that’s part of it. Maybe we can run good in the heat races tomorrow and get a good starting spot for Saturday.”

Owens continued, “I really felt like I needed to get off the top. I saw O’Neal up there and I figured he was running the cushion. I didn’t think I could catch the lapped cars on the bottom so that is why I stayed up top. I had to look over my shoulder there at the end to see who was there, especially on a track like tonight the guy running in second has the advantage. You never know where to be. Hats off to the track crew for a doing a great job on the track.”

The 3-time LOLMDS champion concluded, “I really wasn’t leaning on the cushion much. There is $50,000 on the line Saturday night so I wanted to keep it off of the wall. There was an awesome turnout tonight of drivers and fans. It’s great to have everybody come support us. This makes such a prestigious race even better.”

Darrell Lanigan
Lanigan comments on his new car, “We struggled last week in Illinois and Wisconsin so we came home and built a new one. I love coming home and running here. The fans are great. Hopefully we can finally win this race. We have tried for a long-time to win the North/South 100. We have run second 3 or 4 times. So hopefully we can bring this I-Racing.com entry home with the win for Clint Bowyer and all the guys.”

TimMcCreadie
McCreadie had a great points night with his third-place finish. “It was definitely top-dominated. Jimmy did a good job there and I thought well maybe we could get around him, but Darrell was there and we all had a heck of a race going. I am happy with a third-place. I think we can get some more out of it.”

Tomorrow night, same track, they will rack ’em again. Friday night is the first night of a two-part North South 100. The feature event paying $50,000 will conclude on Saturday.